Do you think like a polymath? Here's a quick test: are you more of a rational or experiential/intuitive thinker?

If you cringed as you read the question and thought to yourself, "I love constantly shifting between both modes of thought," then you're on the polymath path.

According to psychologist Seymour Epstein's cognitive-experiential self-theory, humans have two parallel but interacting modes of information processing. The rational system is analytic, logical, abstract and requires justification via logic and evidence. In contrast, the experiential system is holistic, affective, concrete, experienced passively, processes information automatically and is self-evidently valid (that is, experience alone is enough for belief).

The two systems have unique disadvantages as well as advantages. Thus, the rational system, although superior to the experiential system in abstract thinking, is inferior in its ability to automatically and effortlessly direct everyday behavior, and the experiential system, although superior in directing everyday behavior, is inferior in its ability to think abstractly, to comprehend cause-and-effect relations, to delay gratification, and to plan for the distant future. Since each system has equally important advantages and disadvantages, neither system can be considered superior to the other system.

A large body of research by Epstein and others, including a hot-off-the-press article in the Journal of Personality, supports the importance of harnessing both modes of thought. Epstein's latest research even suggests that self-reports of thinking style (whether you rate yourself as a rational or experiential thinker) is not without basis, as self-ratings significantly correlate with others' perceptions of your thinking style.

Heavily influenced by the important work of Epstein and many other psychologists investigating the dual-process nature of the human mind, I made a distinction between "controlled" and "spontaneous" thought in my dual-process theory of human intelligence. According to my theory, both controlled thought (which consumes limited attentional resources) as well as more spontaneous forms of cognition (which are freer of a central executive) are important contributors to nearly every intelligent behavior (in differing degrees, depending on the behavior). According to the theory, neither mode of thought is absolutely more important, and neither mode is intelligence. Instead, the key to intelligence is the ability to flexibility switch between modes of thought, depending on the demands of the task at hand.

To see how each mode of thought comes with both advantages and disadvantages, here is a summary of a number of findings over the years showing both the positive and negative attributes associated with each thinking style: 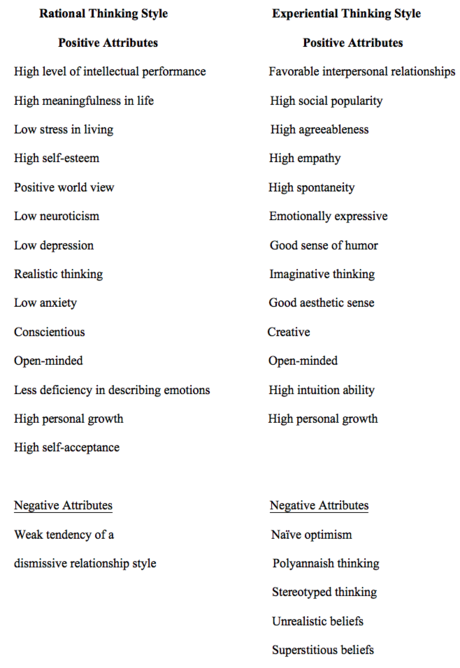 If only everyone, regardless of gender, learned to harness and appreciate both forms of thinking, we could minimize instances where people seem to just be talking past each other. Many, many years of psychological research have shown quite convincingly (to me, at least) that each mode of thought is fundamentally different from the other and that when we are in a particular mode of thought, we actually perceive everything around us differently and use different information to make decisions. Those who are open to experiencing both analytical thought and experiential thought and are flexible enough to switch between the two depending on the demands of the task have the greatest chances of not only changing the world for the better, but also forming deep, empathic connections with others.

It's not easy being a polymath these days. Knowledge is being generated and transmitted at light speed. The sheer quantity of knowledge required to become an expert in almost any domain is phenomenal, with barely any time left to master additional domains.

None of this means that you can't think like a polymath, though, in whatever domain you want to master. The good news is that thinking styles are at least partially separate from actual abilities and correlate with important outcomes. Harnessing more thinking styles only works to your advantage, as long as you have the good sense, flexibility and openness to know when a particular thinking style is appropriate and when it is likely to get in your way.

So want to be a Renaissance person? First step: start thinking like one.

1. Epstein, S., & Norris, P. (in press). An experiential thinking style: Its facets and relations with objective and subjective criterion-measures. Journal of Personality.