Government support for renewable energy is a subject of national debate. In particular, many are scrutinizing the Federal Production Tax Credit for wind energy -- absent legislative action, it expires in December.

Policymakers across the political spectrum are asking questions like "has government support of renewable projects been effective?" and "should government support be continued or scrapped?" Investors in renewable energy are similarly interested in how policies can best provide stable support to help the industry mature. 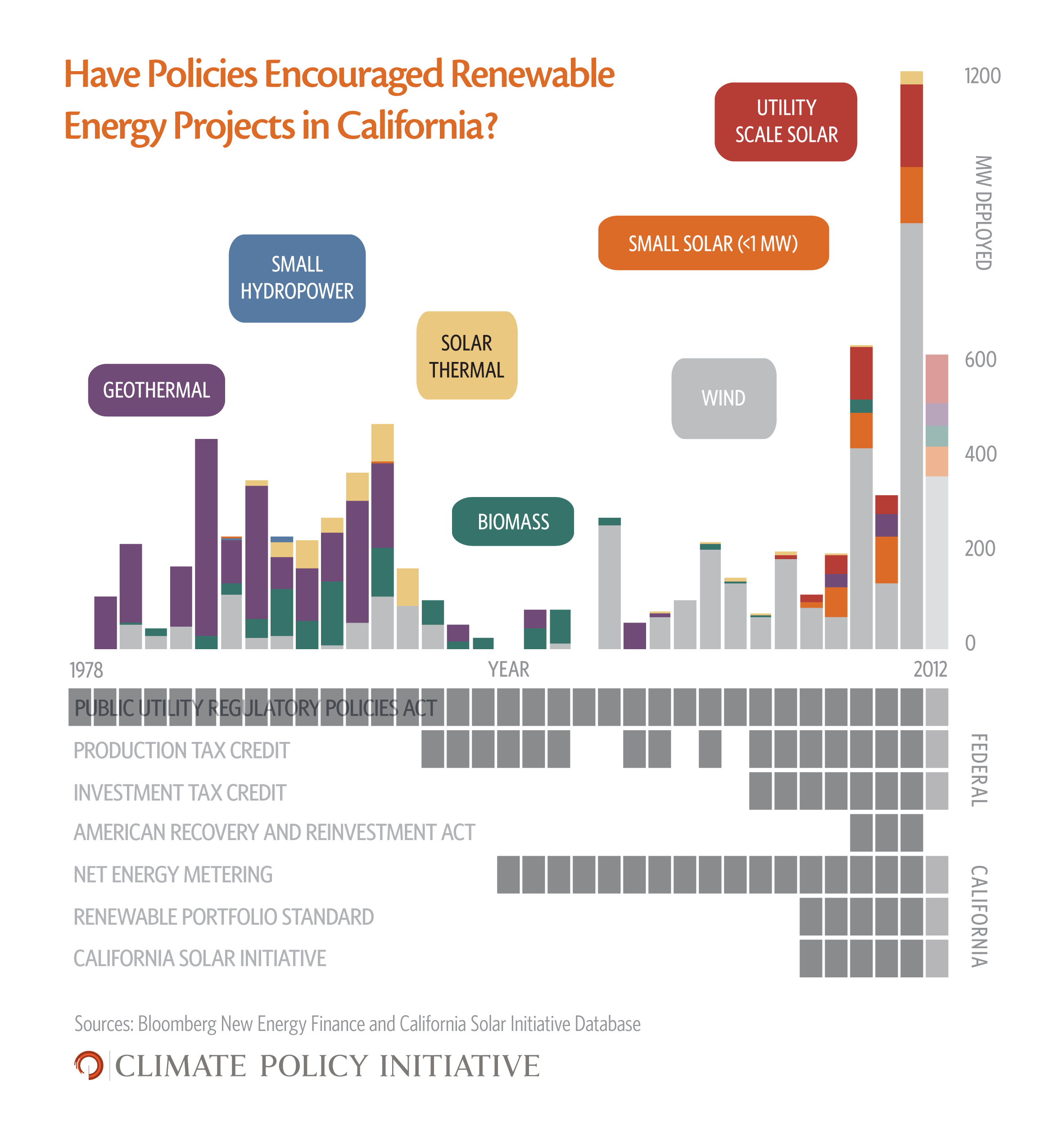 As this graphic shows, renewable energy deployment in California has been concentrated in two waves. The first, in the 1980s, was due to a combination of the Public Utilities Regulatory Policies Act (PURPA), high natural gas prices, and new technologies. The second, which started around 2001, coincided with California's renewable portfolio standard as well as state and federal incentives.

PURPA required utilities to purchase power from cogeneration facilities or production facilities under 80 megawatts that could produce energy more cheaply than the utility itself. In other words, PURPA was neither an incentive nor a subsidy -- it simply meant utilities were obligated to accept low-cost power. This meant that smaller power producers and industrial or commercial facilities with their own generating capacity were able to sell into electricity markets, and led to significant increases in renewable energy production. Geothermal, combined heat and power, and energy generated from biomass and waste benefited significantly from this policy. A small amount of wind and solar thermal production was also installed during this period. By the early 1990s, deployment slowed down. This may have been because the cheapest energy sources were used up, there wasn't as much demand for new capacity, or fossil fuels prices went down.

In June of 1999, the federal production tax credit expired, triggering a "rush" to complete wind power products before it ended. This was followed by an enormous drop-off in deployment. The credit was reinstated a year later.

California's renewable portfolio standard (RPS) has spurred the second wave of renewable energy deployment. Wind initially dominated, but when the California Solar Initiative and Federal Investment Tax Credit came into effect, solar took off as well. The dark orange in the diagram represents small-scale solar that benefited from the California Solar Initiative; the light orange is larger-scale (predominantly over 1MW) solar. Notably, larger-scale solar received a significant boost when the Federal 1603 Cash Grant was introduced in 2009 as an alternative to the Investment Tax Credit.

State and federal policies have played an important role in encouraging the deployment of renewable energy in California, yielding cleaner air, fewer greenhouse gas emissions and clean energy jobs. As California moves toward its 2020 goal of 33 percent renewable energy generation, and its 2050 goal of 80 percent emissions reduction, it will face new challenges. Energy resources will be more intermittent so we'll need to scale up energy storage technology. We will also need more energy as we electrify the transport sector. Addressing these challenges will require ongoing efforts to design efficient, effective policy.