On an almost daily basis, the scientific community provides new evidence that climate change is accelerating, its impact is deepening, and its associated costs skyrocketing the longer we wait to take action.

The challenge is straightforward: to limit global temperature rise to 2°C, greenhouse gas emissions must stop increasing, and must rapidly start decreasing by no later than 2020. To keep it at 1.5°C, as low-lying island states and many other countries are calling for, the peak in emissions must occur even sooner.

This means that speed and scale are of the essence in any climate solution.

As world leaders prepare to gather in Paris to finalize an international climate agreement, and as countries further consider how best to meet their commitments, it is important to emphasize that renewable energy and energy efficiency are the more compelling means currently available to achieve the needed emission reductions in the amount of time remaining to achieve them.

While there are other low-carbon energy options which could potentially address global warming, like carbon capture and storage and nuclear fission, what puts renewable energy ahead of these options is the pace, scale and cost at which renewables can - and are - being deployed.

The world installed four times more renewable energy capacity last year alone (135 gigawatts - the equivalent of roughly 100 million pounds of coal burned) than total nuclear energy capacity built globally in the past decade (28 GW). If adequate planning procedures are in place, the construction time of decentralized and off-grid renewable energy projects such as rooftop solar, is a matter of a few days or weeks. Large wind farms can be built in two to six months.

With nuclear power on the other hand, any plant that has not already started construction is unlikely to contribute to greenhouse gas reductions this side of 2025. The same is true for any large-scale carbon capture and storage deployment.

With this comparison in mind, it is no surprise that renewable power capacity has accounted for more than half of capacity additions in the global power sector since 2011. 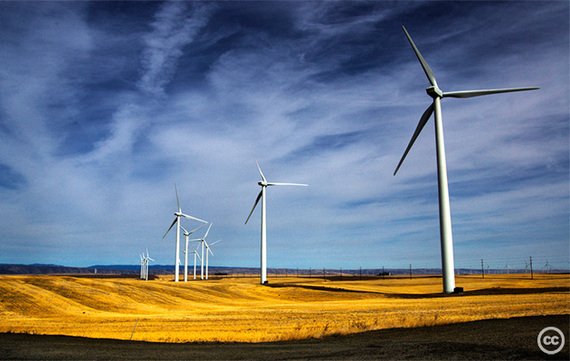 The United States produces two and a half times more wind energy today than it did just five years ago and twenty times more solar energy. Between January and September of this year, wind and solar installations represented 56 per cent of all new electricity generating capacity.

Germany has increased its share of renewable energy in electricity consumption from six to 25 per cent in just four years. On July 25, 2015, Germany sourced 78 per cent of its electricity from renewable sources, topping the previous record of 73 per cent.

The record-breaking pace of renewable energy deployment is not just limited to wealthy, developed countries. In Bangladesh, a program initiated in 2002 with an ambition to install 50,000 solar home systems over five years is now installing 50-60,000 systems each month, benefiting more than 20 million people country-wide.

This massive growth is being fueled, in part, by the strong business case for renewable energy. Biomass, geothermal, hydropower and onshore wind are all competitive or cheaper in comparison with coal, oil and gas-fired power stations, even without financial support and despite falling oil prices.

Yet despite the growing business case and the impressive pace of deployment in recent years, we are still only using a tiny fraction of the technical and economic potential of renewable energy technologies. In Paris, it will be up to countries to commit to strong targets, and in turn, give a strong political signal to catalyze further investments in renewable energy.

The climate solution is in our hands. Renewable energy technology is available today, quick to implement, scalable and cost-effective.

These traits are probably not what most people think of when they think of renewable energy. They should.