While many areas of Russia will probably remain dependent on gas and coal for the foreseeable future due to central plant energy distribution, there are plenty of communities in Russia where renewable energy make economic and environmental sense. Distributed energy systems can be the key to Russia's success.

Russia is in a strategic position to become one, if not, the world leader in agile energy systems that combine central plant energy systems with on-site power that uses renewable energy. These community and local city renewable energy systems for homes, building and complexes can provide over 50% of the nation's energy demands as well as reduce its greenhouse gas and emissions impact to zero within the next decade. Continuing with Renewable Energy Rises in Russia , the issue is what is next? Taking the "agile system" strategy whereby nations and states or regions have their own central power systems, yet there is also the need distributed or local and community power is becoming a global strategy for governments and decision makers.

Consider solar. Russia may have the image to people around the world as a "cold dark place," but in fact several Russian regions lie south of the 51 parallel, the latitude of London. If the UK can have a thriving solar market, why not Russia? Russia's continental climate means dry clear summers where some areas get 300 sunny days a year. In mountainous regions like Caucasus and Altai, high elevations mean greater exposure to solar radiation. Even Russia's cold climate is a positive side: solar panels tend to work better at lower temperatures. As we mentioned in the previous article, Russia recently opened a notable solar panel plant that lies above the Article Circle, in a Siberian village of Batagai.

Wind also has considerable potential, especially along Russia's seashores near Murmansk in the North, and near Vladivostok in the Far East. In the volcanically active Kamchatka, geothermal energy is plentiful as the same conditions exit in Iceland where 93% of it total energy demand comes from geothermal power. And in the middle of Russia, biomass based generation, such as wood pellet plants, can take advantage of the fact that Russia has largest forest reserves in the world. 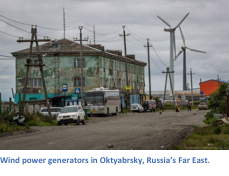 For development of renewable energy, the critical dimension is not so much the north to south range, but rather Russia's vast distances of east to west. In these different areas are also extensive economic and demographic differences across vast Russian territories. As now in many other countries, the path toward green energy development for Russia's renewable energy depends on the combination of local on-site energy systems. In the more densely populated European areas, larger installations connected to the central grid make technological and economic sense. Yet there are vast areas of Russia where on-site power generation from renewable energy makes more sense. For example in Siberia, distributed on-site power is more economic. In the Far East, in places like Oktyabrsky, is a small fishing village in the Far East on Russia's Kamchatka peninsula that we mentioned in our previous article, the logistical and economic hurdles of supplying expensive diesel fuel to remote areas is the driving factor.

Russia's Energy Ministry estimates that 20 million people in Russia rely, in whole or in part, on expensive diesel generators. The replacement of these systems to renewable energy power technologies is a natural market for solar and wind energy that alone can generate up to 1 GW of energy. And that would be a billion dollar investment opportunity for shrewd investors.