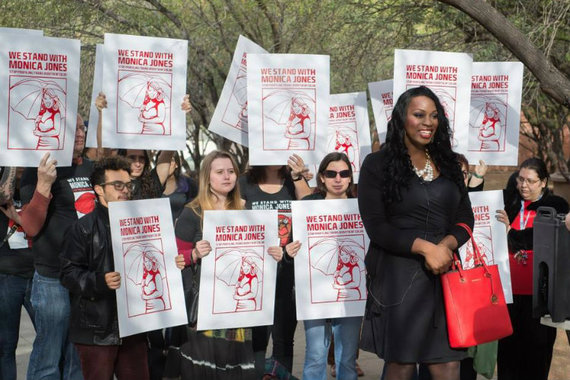 Monica Jones and supporters protest the profiling of transwomen of color and ordinances against street solicitation in 2014. (c. Facebook)

On Tuesday, federal police in conjunction with the Department of Homeland Security raided Rentboy, a male escort advertising website, arresting the CEO and 6 employees.

The raid took place on #blacktransliberationTuesday, and less than a week after leading US LGBT advocacy organizations announced support for Amnesty International's recent stance on the decriminalization of sex work, a vote that happened the week before.

The timing is unique. So too is media coverage, with many drawing parallels to earlier raids on gay bathhouses and gay communities, some journalists, advocates and sex workers calling the raid on Rentboy the "Stonewall of Sex Work."

The parallel is poignant, especially given one the arrested individual's recent critique of the whitewashing of transwomen of color and sex workers from the Stonewall narrative. Many in the community wonder: Perhaps this raid is the pressure point of mounting attacks on sex worker communities, and, like the raid on Stonewall Inn, perhaps the raid on Rentboy.com happened at the right historic moment, to the right people and will bring about a similar movement. 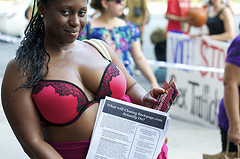 By that, we mean something both positive and problematic. The right people, means the "good guys." Rentboy is not a pimp. Nor a trafficker. It's not even an "escort service" or "prostitution ring," as it's been called by website after website -- Rentboy was a fairly priced, well-designed and well-run classified ad site for male adult entertainers.

The right people also means people who invested in and were well-regarded by LGBT, harm reduction, free speech and adult work organizations and communities. Rentboy.com, more so than other adult advertising sites, was a community-based institution. It offered college scholarships to advertisers. Its' staff partnered with and promoted LGBT and harm reduction organizations and communities, like Hook Online. Rentboy.com was well-regarded by its advertisers. It was an attack that was felt as a loss by diverse adult worker, LGBT, harm reduction and sexual freedom communities that they positively impacted, an attack that even the broader public could see as nothing but repressive, unproductive harm. 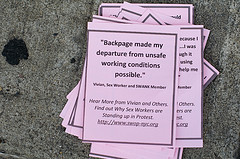 In a press release drafted by several male adult workers, one mentions: "Rentboy.com is more than just an ad site for adult entertainers. They put a lot of time, effort and resources into harm reduction, learning about rights and resources. I've advertised with them for 7 years. Thanks to rentboy, I've had a roof over my head and food in my belly because of work I consensually chose." Danny Cruz, male sex worker, Los Angeles.

Yet "the right people" also means something problematic. It also means a group of adult workers the putative center is most likely to empathize with and listen to: male, indoor, grey-area adult workers. A group that, due to gendered stereotypes about sexual agency and vulnerability, is immune to the contorted trophe of sexually disgraced, home-wrecking, soul-and-body-sold kittens in need of rescue that cis-and trans-feminine sex workers are so frequently depicted through. 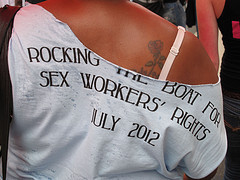 Let's be clear: nobody has questioned the reasons why rentboys entered this line of work. Nobody has fantasized about ways they can help them have a "normal" life. Nobody has called them a neighborhood nuisance or drug addicts or pontificated on the presence of a controller in their life. Nor should they. But compared to non-male identities, the discourse in the Rentboy.com raid aftermath has been a unique "privilege" granted to indoor male sex workers, one that we need to extend to all sex workers -- of all genders and races -- working in all circumstances.

This is not to criticize the origins of solidarity with sex workers. It is flooring to see the unprecedented level of solidarity for sex worker rights that so many activists have been working towards for decades. More than statements of support, it is moving to witness the ability of mainstream journalists and advocates to recognize the historic oppression and criminalization of their own communities in the aftermath of Rentboy.com's raid. Whatever the origins of this support, empathy and humanization of sex workers, this is a powerful moment. 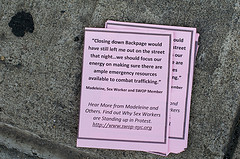 What is concerning though, is that some of this support has been accompanied by an undercurrent of differentiation and selective solidarity: "It doesn't match what is happening in other cases." Queer Voice publisher Derrick De Lise told the New York Times.
Or, in a Daily Dot Article: "Rentboy.com is nowhere near the size of Backpage or Craigslist, both of which have a history of hosting prostitution ads that were later linked to trafficking and violence..." The diversity of Rentboy advertiser experiences mirrors those of Backpage, Craigslist or MyRedbook, so why the differentiation? 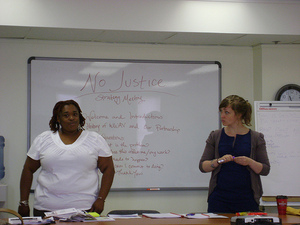 Again, we need people to recognize and work to end the historical forms of oppression in which female-identified and street-based sex workers do not control the conversation about their activities. This selective solidarity -- at it's extreme, becomes Lena Dunham's concurrent anger over the leak of Conde Nast CFO's alleged same-sex escort triste while ardently supporting the criminalization of clients for female-identified sex workers.

If this is the "Stonewall" of sex work, let it not be the aftermath of Stonewall where a privileged minority colonizes and benefits off the work of society's "others." In this historic moment, we cannot whitewash trans and cis-women, people of color and outdoor workers out of the conversation. Without the centuries worth of organizing, political work and courage many had to live openly, the positive support and solidarity that many have for Rentboy.com today would not be possible. As history unfolds, hopefully the outrage we feel now will build momentum for a movement that brings about change for sex workers of all genders, in all contexts.

Body photographs taken in 2012 at the International Aids Conference and during protests in support of Backpage.com in New York City. Credits: PJ Starr