New Italian premier Matteo Renzi, in office since February 22nd, was never a member of parliament. The machinations that put him in power were godfathered by two old and skilled players at the game: 88-year-old President Giorgio Napolitano and 77-year-old convicted former prime minister, Silvio Berlusconi. Renzi is 39 and his ministers average 48 -- two women ministers, 33. They believe they now hold the power. They may find they merely hold the government. The reins to that tenuous position are slippery with old men's sweat.

In its deepest depression since 1861, Italy, "the most dangerous economy in the world" according to Time magazine, witnessed the rapid February 14th demise of Enrico Letta, its 63rd prime minister in 68 years. Counting on his aberrant center-left-center-right coalition, Renzi promises four years of stability, along with core social and economic reform. But opposing his call for change, political leaders of the majority of the electors plead for new elections. Italy is in ruin -- its major cause a political and economic system governed by old. Slippery reins indeed, held in very young hands.

Gerontocracy, the power of the elderly, is decades-old in Italy, but a soaring trend in most OECD countries, where the median age of voters increased from 1990-2005 three times faster than in the preceding 30 years. In this, Italy is truly a leader, its temporary, underpaid workers an exploding under-class, mostly young and female.

Italy and the Power of the Elders

Countries with aging elites would profit by a closer look at Italy, which hosts the third oldest population in the world. For 70 years its archaic electoral system helped the old dominate economy, government, parliament and society at large. With an average age of 59, Italian men of power (women of power are almost inexistent) are the oldest in Europe. The median age of university professors is 63, bankers and bishops, 67, while only two of the 2,500 members of parliament were under 30 in the three elections before 2013. No wonder young and educated Italians are leaving Italy in droves.

The decline in Italian per capita available income since 2007 is greater than during its worst depressions of 1866 and 1929. A growing percentage of tax income goes to service state debt, currently standing at 133 percent of GDP, Italy's productivity languished for more than a decade. GDP shrank by nine percent in six years, as the black economy and tax evasion amounted to 20 percent of GDP.

Meanwhile, as inequality, poverty and 13 percent unemployment (highest since 1977) continue unchecked, tens of thousands of the best and brightest emigrate each year. Italy imports laborers and exports engineers, scientists and doctors. The president of the Conference of the University rectors of the country, university Rector Dr. Antonio Loprieno, is Italian. But the "country" is Switzerland. An Italian, Dr. Lino Guzzella, serves as rector of the top-rated University in continental Europe (ETH). In Zurich.

Pensioners' trade unions and parties overrepresent the interests of the elderly, but the young have no such support on their behalf. Old Italians got rich in the decades of rapid economic growth after WWII, hanging on to what they have, and to hell with those on the ladder below. Perhaps Italy needs a Marshall Plan for its young.

"Non ho l'età," Renzi said, addressing the 315 Senators for the first time on February 25th, "I do not have the age." To be a Senator, one must be 45 or more and Renzi himself would not qualify for another six years. Prime Minister perhaps, even President of the United States if he were born there, but not yet the hallowed nether-world of the Italian Senate. "We do not have the age" must also be said by 4.3 million adult Italians. No other country requires its citizens to wait until 25 to achieve full political rights. The young can legally vote for the Italian Chamber of Deputies at 18, but these eight percent of potential voters are barred from a Senate vote, some of them for seven more years. As youth unemployment passes 42 percent, it's ironic that those most affected by Italy's economic demise are not yet permitted to elect the half of Parliament that determines their futures.

Managers and politicians these days willfully neglect the long-term impact of their decisions at the peril of future generations, maximizing short-term solutions, especially in ecological, technological and financial matters. Seven decades of control by the elderly crippled Italian renewal, innovation and economic competitiveness. The World Economic Forum 2014 listed Italy as plummeting to number 49 in that area. Waiting 30 years for "big reforms" that never came, Italy should immediately lower full voting rights from 25 to 18 and electoral right to the Senate from 45 to 25. This would enhance political stability and justice for all, allowing Italy to turn its back on the iron grip of old, frozen, self-serving minds. 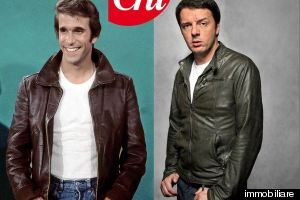 Mr. Renzi -- alias "Renzie," as nicknamed by comedian-politician Beppe Grillo, referring to "Fonzie," the cocky, young hero of the sitcom Happy Days -- is desperately chasing young voters and trying to imitate the soaring M5S (Five Star Movement) of 64-year-old Beppe Grillo. In 2013, an estimated 47 percent of those under 25 voted M5S, but only one in six supported Renzi's party.

With a new and disruptive coalescence of young voters on the rise, who fully oppose the iron grip of the elderly, the fragile and illusive reins of power may well slip from Renzi's grasp.