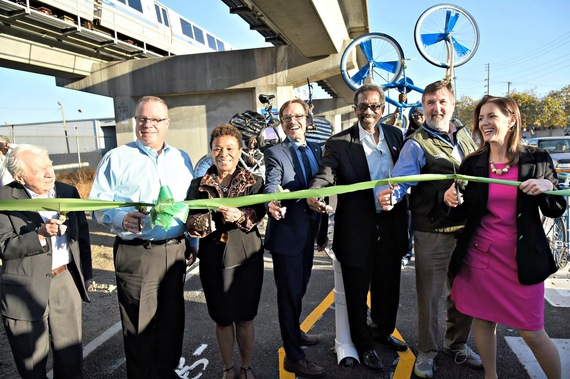 While the nation contends with elected officials who continue to insist that climate change is a hoax, there are others who stand as an example to being ahead of the curve understanding the environmental challenges facing the country.

Rep. Barbara J. Lee (D-CA), has a long history of standing up to those who would consciously chip away at the rights of citizens to have clean air and water. Lee was an early adopter of the premise that there is an inherent connection between environmental hazards and the quality of daily life. Most specifically, she understood how poor and minority communities were inequitably burdened.

The League of Conservation Voters has calculated that Lee has a 95 percent lifetime score for her votes on environmental issues. She has consistently disagreed with efforts to prevent the EPA from regulating greenhouse gases, fought against the subsidies that keep Big Oil in receivership of generous government subsidies, and promoted a renewable energy trajectory that would be a boost to the economy. While others were on the fence about the Keystone XL Pipeline, Lee was clear that she believed it was an ill-advised option.

In Oakland, situated in Lee's district, stats show that the asthma rate is at the top levels in America. Lee has noted, "Children in West Oakland are seven times more likely to be hospitalized for asthma than children in the rest of California."

I contacted Lee's office with some questions about her ongoing activism in protecting her constituency and promoting proactive solutions.

You are a founding member of the Safe Climate Caucus (SCC) which originated in 2013. A brief was recently filed with the U.S. Court of Appeals in Washington presenting the premise that the EPA has "overstepped it legal authority" through its proposed regulation of carbon dioxide emissions. 171 House members have signed on, in an effort to disrupt the Clean Power Plan. How do you and your colleagues in the caucus plan to respond?

For the last seven years, Congressional Republicans have worked to derail the President's agenda at any cost, including the health of our environment and families. As a proud Member of the SCC and Sustainable Energy & Environment Coalition (SEEC), we are working to help the President implement his Clean Power Plan and advance legislation that preserves our planet for future generations.

Focusing on Environmental Justice, you have worked to advocate for the health issues of families and children from low-income communities of color. Can you discuss your initiatives on this important front?

For generations, African Americans, Latinos, Asian Americans and Pacific Islanders and low-income communities have been disproportionately hurt by pollution. You can clearly see these disparities in the childhood asthma rates for these communities. Recently, I joined several of my colleagues in introducing the Low-Income Solar Access Act (H.R. 3041). This legislation would expand solar energy access to low-income communities and empower them to build sustainable, community-based energy generation that doesn't further pollute our communities.

The repercussions from climate disruption threaten all areas of the country with severe weather occurrences, rising sea levels, fires and more. However, we still have those in public office who refute the science. Are you concerned that this will impede America in meeting its agreements from the Paris accords if carbon emissions aren't reduced?

The American people know that climate change is a serious economic, national security and environmental challenge; they also understand that leadership and action is needed. Unfortunately, a small minority has chosen to ignore science in favor of supporting special interests that have derailed our work on this issue.

The nation has now seen the dangers of methane leaks and fracking infrastructure play out in your state. What steps do you think need to be taken?

For many years, we have understood the devastating impacts of methane leaks and fracking. It's past time that we sever our dependence on hydrocarbon energy generation and adopt more sustainable technologies that are already powering communities and nations around the world.

We can no longer wait for environmental justice; we must demand it. Simply, too much is at stake. We are talking about our children's health and their futures. As policymakers, parents and grandparents, and community members, we must turn up the street heat and push back against the special interests that reject science and are willing to risk our children's health.