One of the things I talk a lot about on these pages is the need for policy to reconnect economic growth to middle-class prosperity. There are a number of policy approaches to attacking that fundamental problem of the US economy. I've often stressed full employment as a solution, a goal that should appeal to people of any political stripe or sensibility, since it's about efficiently utilizing our resources (though we can certainly argue about how you get there). Others have stressed, and I strongly agree with them, the need for greater union power to enforce a more equitable distribution of growth.

Rep. Chris Van Hollen has just introduced another approach, a bold, far-reaching one that goes directly at the problem by providing a significant tax credit to middle and upper-middle-class families, along with a spate of other benefits, paid for largely by taxing those at the top of the income scale. If what we're seeking is the policy glue that will reconnect growth and broad prosperity--and that's exactly what we should be looking for--then Rep. Van Hollen just offered up a potent tube of economic epoxy.

All told, the plan raises $1.2 trillion over ten years and uses it to:

-Boost paychecks with a tax credit worth $1,000 per year for each worker, so $2,000 for working couples. The credit is targeted directly at the middle class--it's non-refundable, so it doesn't reach low earners, though Rep Van Hollen said he's looking for ways to make it at least partially refundable. It phases out at $100,000 per person or $200,000 per couple.

-Provide a savers bonus of $250 to those who save at least $500 of their tax credit or their EITC.

-Provide a tax benefit to employers that establish apprenticeship/"earn-while-you-learn" programs.

The slide below shows Van Hollen's estimate of how much the plan would return to a dual-earner family with a kid in child care, compared to the impact of the tax plan in recent Republican budgets. BTW, note the income level of the family in question: $80,000. In other words, he's definitely targeting the middle class as opposed to the poor, though to be fair, the main Congressional Democrats' budget proposal has numerous important anti-poverty provisions. Van Hollen has emphasized that this plan should be seen as building on top of their budget. 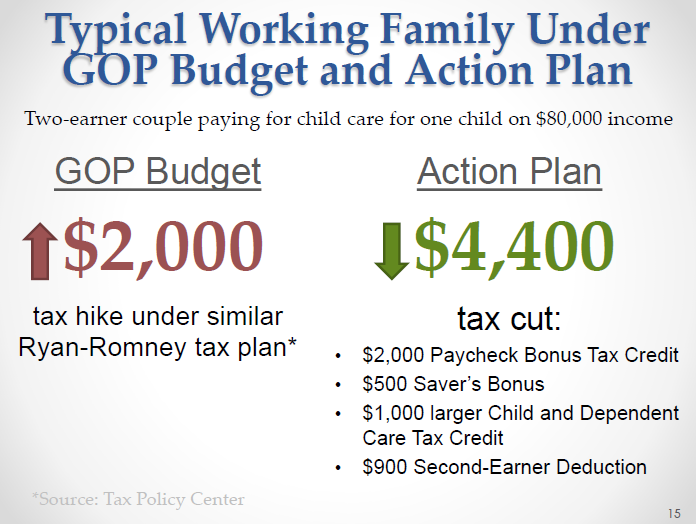 The proposal is revenue neutral. The main offsets are a 0.1% (10 basis points; that's $5 on a $5,000 trade) tax on financial transactions (stocks, bonds, derivatives) and (as I read it) the targeted closing of some of the tax breaks that benefit the top 1% (tax expenditures like the mortgage interest deduction or the favorable tax treatment of unearned income). The plan notes that the FTT would ideally be phased in along with a similar measure proposed in the European Union. Such coordination is designed to reduce concerns about the ability of investors to avoid the tax by seeking offshore exchanges.

Another potential revenue raiser would disallow corporations from deducting bonuses above $1 million if they're cutting the jobs and pay of their workforce. Note that the plan doesn't restrict "performance pay" above $1 million. It just says you can't deduct it from your taxes unless you're also providing raises to employees (or more directly sharing profits).

On the structure of the plan, as noted, Rep. VH is looking into ways to make the tax credit at least partially refundable; for example, by allowing the credit to phase in at the first dollar of earnings for all workers (below the caps), even those without federal tax liabilities. That raises the price tag, but it also means it reaches lower earners who clearly need the help. In that regard, the VH team can also point to the D's budget, which makes permanent key anti-poverty improvements to the EITC and Child Tax Credit that are scheduled to expire in 2017.

You will not be surprised that the Republican majority has yet to embrace Rep. Van Hollen's plan. Chris, if you're waiting by the phone for Leader Boehner's call, I'd say feel free to go get lunch.

But that's not the point. If the criterion for acceptance of a policy idea is that "House R's will support it," then we can all close up shop for now. To the contrary, this kind of expansive thinking is exactly what members should be engaged in. Whether you like CVH's approach here in attacking inequality through the tax code or favor ideas that target market outcomes, what's so very notable here is that a senior member of the Democrat's caucus is trying to do something about the relentless inequality that's beset the middle class and poor for decades.

He's demonstrably not saying, "well, now that we've got decent growth in the macro-economy, we're done. Let's go fundraise!" He's saying growth is necessary but it's not sufficient to reach the folks for whom GDP growth is something that shows up in the business press, not in their paychecks. Policy makers must therefore craft policies that will go right at this growth/prosperity divide. That's what Van Hollen has done here and I say: you go, man!