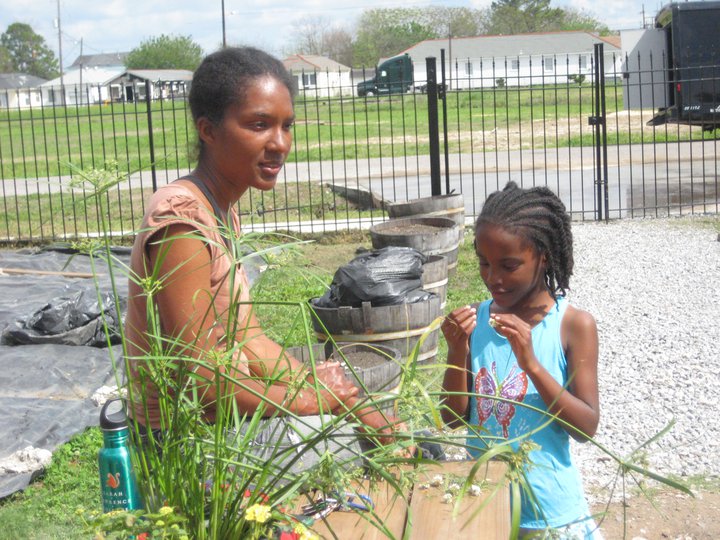 Jenga Mwendo, who bought this land to plant a community garden in the Lower 9th Ward, with her daughter Jasmine.

Fifteen teenagers from Kehillat Israel synagogue sat on the floor of a house in the Lower 9th Ward in New Orleans, Louisiana. There were no walls, no stairs -- and no one was home. The tile on what might have been the bathroom floor was still visible, along with remnants of linoleum that probably belonged in the family's dining room. From where they were seated, they could see both the levee and a sustainable house built by Brad Pitt's foundation offering a glimpse into the past and the future of a community devastated by Hurricane Katrina.

This was the way Billy Planer, founder of ETGAR 36, started off the community service trip for Aliza McHugh, and the other teenagers from the temple, who had given up their Presidents' Day weekend to work in the Lower 9th Ward.

"There was nothing in the house, but I could still feel that someone's life was there," recalls 15-year-old McHugh. "And the thought that the people will probably never come back to their home was really awakening. We also walked to the levee that was right above it and I remember having this overwhelming feeling and thought ... because of one wall [of the levee]. The wall crumbling caused the entire flooding. It caused all of this."

Planer takes groups of young Jewish students on trips like this throughout the year. The word
"etgar" means "challenge" in Hebrew and Billy's challenge to the students is to "get involved politically and socially to create change in the world."

"I took them to the house to help them understand that it wasn't just something sad that happened -- and to keep them conscious throughout the trip," Planer explains. For the students to successfully engage in Tikkun Olam, the Jewish call to help "repair the world," Planer believes that they must first make an effort to understand that world.

For McHugh, this was a personal journey. Although she had not been to New Orleans since she was 5 years old, her parents had deep roots there. Her father attended Tulane University, and her parents made an annual trip to New Orleans for the jazz festival. On the first day of the trip, Planer also took the students to visit Touro Synagogue, one of America's oldest synagogues, which also happened to be the same place her parents, Jonathan and Karen, were married.

In some ways, McHugh felt as if she was retracing her parents' footsteps but, after seeing the devastation in New Orleans, she realized that her journey would take her on a slightly different path. She started to wonder why, when her parents came to New Orleans, they never did any work. This is a question she would ask them later.

The group's first community service activity was at a community garden in the Lower 9th Ward, established by Jenga Mwendo. Mwendo, whose name means 'build,' bought the space because she thought it was important for her neighbors to have a sustainable garden where they could grow fresh fruits and vegetables, and have a place to come together as a community.

"One of the things they learn is the social justice of food," Planer explains. " In the Lower 9th Ward the closest grocery story is five miles away, but over 30 percent of the population doesn't own cars. So kids in the Lower 9th are growing up on a fast-food diet. Kids in the suburbs have access to fresh fruits and vegetables, but these kids do not. I bring the students here so we can talk about food issues, and get to know the needs of the community."

Every morning the Kehillat Israel teens woke up and headed to Mwendo's garden. They sanded, primed, and painted a fence that was worn and rusted. They built a gravel road that circled through the entire garden, and performed whatever work was asked of them.

"Frequently there were kids coming in from the neighborhood and there were neighbors helping out," McHugh says. 'It was really special to see a community outside of ours working together."

Rabbi Rochelle Kamins, who originally proposed taking the students to New Orleans, recalls questions from students prior to the trip on why they weren't doing something cool, like building houses in New Orleans, instead of working on a garden. But, as they worked on the garden, she could see that a light bulb was switching on for the students.

"There was real heart there," Kamins recalls. "The kids really connected with Jenga and appreciated meeting her. It started to be less about 'I wanted to be building a house,' and more about 'Wow, we are helping this person. And we are helping other people. And we don't know them. And even though we are not meeting everybody, through Jenga we know that we are making a real difference.' "

One night after a long day of working in the garden, Planer took the kids for a night of music and fun at the famous Rock N' Bowl, the same place Aliza's parents had hosted their wedding reception.

Planer explains that the trip was not just meant to involve the kids in community service, but also to help them learn about New Orleans culture. It helps the students with answers to what he says are important questions: Why does this city need to be rebuilt and what did New Orleans bring to the table of America?

The day before the trip ended, Planer took the students to meet Ward "Mack" McClendon, founder of the Lower 9th Ward Village, a community center with a basketball court, computer center, garden and places to sleep. A resident of New Orleans for over 50 years, McClendon suffered the aftermath of Katrina, sleeping in his car at times, and not knowing for six months if his home had floated away in the flood. Through a strange twist of fate, McClendon found himself back in New Orleans, building a community center to serve the needs of one of New Orleans' most under served communities.

During their meeting with McClendon, he told the kids that they were his heroes.

"When Katrina hit, I thought people didn't care; but I was wrong," McClendon recalls. "I learned that people do care, but that they just don't know what to do. And seeing the young people give up their spring break and their vacations, and work harder than anybody I've ever seen in my life ... I find them to be so amazing."

McHugh stood shocked, as she fought back tears. McClendon was her hero -- one of the most amazing people she had ever met. She wondered how McClendon could really see her as a hero.

"These kids could easily say 'You older guys messed it up, so you should fix it,''' McClendon says. "But they are not saying that. They are saying, 'How can we help fix it?' And that is so comforting for me. And it drives me to do the best I can with the resources I have. They don't just come and look. They really understand that this is a problem that has to be fixed. And the young people really do want to get it right. So, they are the heroes. I literally do mean that."

"I do feel like we helped in our own way," says McHugh, who attends Santa Monica High School. "We didn't build a house for a family or work on a whole landscape. We just built a small garden, but the little amount that we did meant something. People saw us working and said it was really nice for us to be there. It's about the little acts and then spreading the word. I told my friends about it, and that they should go and help out. The hurricane was [more than] five years ago, but there is still destruction, and Mack said he didn't want people to forget about New Orleans."

When McHugh returned home, she shared the stories from her trip with her parents, and asked them why they hadn't helped out in New Orleans. In response, they explained to her that they supported New Orleans by going to the jazz and heritage festival every year. The event "is the crown jewel of New Orleans music culture," her dad Jonathan said. "If you get selected to play at the jazz fest, it is the ultimate honor for a local musician."

He explained the financial and cultural impact the festival has on the residents of New Orleans. "The town needs these events and is proud to show off all their amazing food and music to the tens of thousands of people that come from all over the world to attend. There are tons of local jobs that are created by the jazz fest and a large amount of revenue flows into the city during the festival."

she told them that wasn't enough -- that they actually needed to do something.

In November, McHugh and her family are headed back to New Orleans, for her father's birthday. She plans to visit Mwendo and McClendon, share the experience with her family, see what's become of everything, and find out what else she can do.

This article was originally published at the Palisadian-Post