In a cover story in The Atlantic last week, Ta-Nehisi Coates built a powerful argument for the U.S. government making reparations to black Americans, not just for the impact of slavery but also for the generations of legalized (and in some cases legally mandated) discrimination that made it impossible for most black families to amass wealth.

But a new set of HuffPost/YouGov polls suggests that most Americans aren't prepared to take the step of making reparations, either for slavery alone or for the century-plus of institutionalized racism that followed.

In one survey, Americans said by a 68 percent to 15 percent margin that the government should not make payments to black Americans who are the descendants of slaves. Americans were somewhat more likely to say they would support reparations for slavery if they came in the form of education or job training programs, but still rejected the idea by a 57 percent to 27 percent margin. Public opinion on the issue appears unchanged in the past decade: In a CNN/USA Today/Gallup poll conducted in 2002, just 14 percent of Americans said they would support making cash payments to slaves' descendants.

Factoring in the systemic discrimination that followed for more than a century after slavery's end does little or nothing to budge Americans' opinions. In a second HuffPost/YouGov poll, Americans said by a 69 percent to 15 percent margin that the government should not make cash payments to black Americans "to make up for the impact of slavery and discriminatory policies that continued into the 20th century." By a 51 percent to 33 percent margin, most said they don't support job training or education programs for African-Americans to make up for that combined impact.

The polls were conducted among a group of Americans chosen to reflect racial and other demographics on a national scale.

Nearly half of Americans said the present-day wealth gap between blacks and whites is something that can be attributed to slavery, although an almost equal amount disagreed with that idea. A higher number of Americans said they believed the wealth gap is a result of the years of systemic discrimination that followed slavery's abolition.

As a whole, Americans were also divided over another instance of reparations in our own history -- the legislation passed in the 1980s to compensate Japanese-Americans who were forced into internment camps during World War II. In the first poll, 37 percent of Americans said the government should have made these payments, while 41 percent said it should not have.

The poll did find that Americans support reparations in certain cases -- for example, more than half of respondents said the German government was right to pay reparations to Jews who survived the Holocaust. But it may be the case that Americans view both slavery and post-slavery discrimination as being too far in the past to warrant a reparations program. The initial HuffPost/YouGov poll shows that when it comes to the difficulties black people face in buying houses, taking out loans and getting a quality education, more Americans view these as problems of the past than as current problems. (A somewhat higher number of respondents said that discrimination by police and the criminal justice system are indeed current problems.) 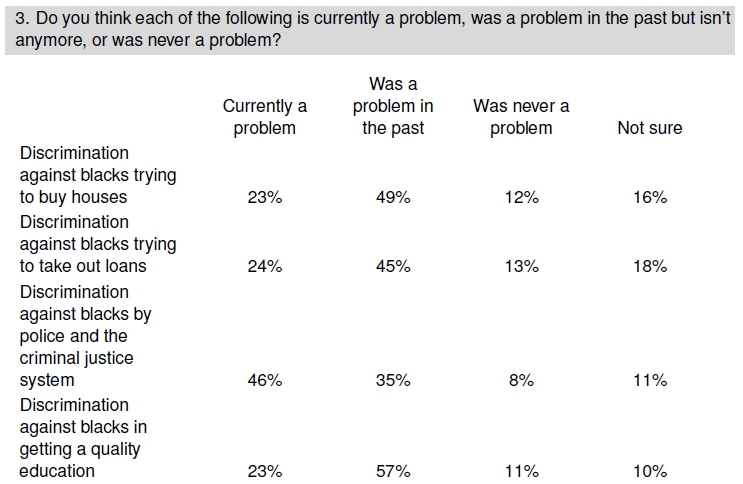 On the other hand, Americans are divided and uncertain over whether they would have supported reparations for slavery even immediately after it was abolished. In a third HuffPost/YouGov poll, 37 percent of Americans said the government should have made cash payments to freed slaves after the end of slavery, 31 percent said it should not have, and 32 percent said they weren't sure.

And in the initial poll, even a more general reckoning with the shadow of slavery on America's past received little support. Only 28 percent of respondents to that poll said they thought the U.S. government should apologize for slavery, while 54 percent said it should not. (The House of Representatives passed a resolution apologizing for slavery in 2008 and the Senate followed suit in 2009, but differences over language rejecting reparations in the Senate bill mean that the U.S. Congress has never issued a joint apology.)

Of course, it is possible Americans could experience a change of heart on the issue -- in his article, Coates himself notes that he is a recent convert to the cause of reparations. But supporters of reparations have a long way to go.

The HuffPost/YouGov polls were conducted May 23-27, May 27-28, and May 28-29, each among 1,000 U.S. adults using a sample selected from YouGov's opt-in online panel to match the demographics and other characteristics of the adult U.S. population. Factors considered include age, race, gender, education, employment, income, marital status, number of children, voter registration, time and location of Internet access, interest in politics, religion and church attendance.