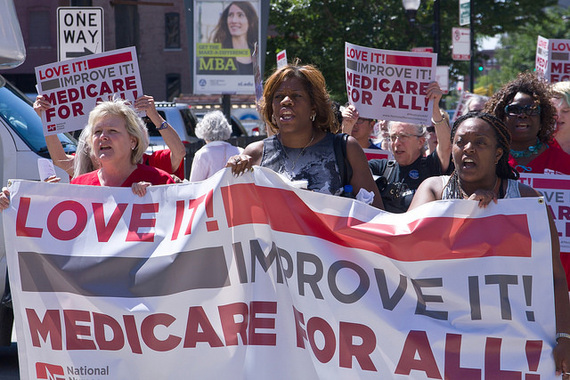 Now that the dogged opponents of the Affordable Care Act have caught the Obamacare bus, transforming U.S. healthcare is back on the political agenda.

Repeal of the ACA will not curb the persistent, systemic inequities of our profit-focused healthcare system.

Tens of millions, even those with health insurance, still struggle with unpayable medical bills due to rising deductibles and co-pays and skyrocketing prescription drug costs and hospital charges.

Insurance networks sharply restrict patient choice. Millions remain without any health coverage, or simply avoid getting the care they need because they can't afford it -- at great risk to their health. Disparities based on race, gender, age, or where you live remain rampant.

Even advocates of repeal are fearful of the impact of throwing millions off the expanded Medicaid coverage or eroding the ACA crackdown on insurance industry abuses, such as barring coverage for those with pre-existing conditions.

One widely-promoted theme is to replace the tax subsidies the ACA provides to buy private insurance on the ACA exchanges with tax credits or health savings accounts to buy insurance on the open market. But those offer consumers even less protection from skyrocketing premiums or being forced to settle for bare bones junk insurance plans with limited benefits and higher out of pocket costs.

Another proposal is subsidizing federal funding of Medicaid expansion with state block grants. That, too, is problematic, opening the door to severe state budget cuts that would leave many lower income people and families without needed coverage.

Then there's the Paul Ryan plan to privatize Medicare -- a sure-fire way to impoverish millions of seniors forced to fend for themselves on the inefficient, more expensive private market.

If the well funded, "grassroots" campaign in response is led by the Beltway Foundations and NGO's to only defend the troubled ACA, then, yes, that's precisely what will happen.

But the "free market" is exactly what created the healthcare crisis in the U.S. in the first place, creating a health care system largely based on ability to pay that ranked first in the world in spending and far behind most industrial nations in access, out-of-pocket costs and a variety of quality benchmarks.

Nurses' credo for transforming the U.S. healthcare system is to establish a single standard of safe, therapeutic care for all, based on the clinical judgment of doctors, nurses, and other providers.

Only an improved Medicare for all can guarantee healthcare for all based on patient need. Eliminating private insurance and the high premiums, co-pays and deductibles will save families thousands of dollars, free up millions for businesses, increase wages for workers, and save hundreds of billions for taxpayers.

Gone would be the 20 percent waste that is endemic to a system based on private profit. No longer will taxpayers bail out for-profit insurance companies and corporate hospital chains and greedy nursing home operators.

Rather than guarantee high executive salaries and trapped customers, we can expand Medicare through increasing the existing fair share financing.

Here's a checklist for reform: 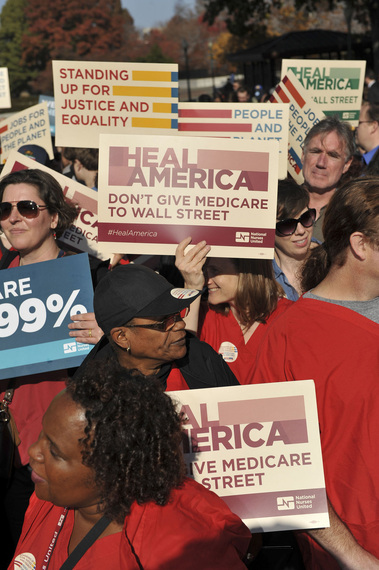 Improved Medicare for All checks all the boxes. If Ryan really believes repealing the ACA will "leave no one worse off," the only way to achieve that is Medicare for all.

California, with Democrats in control of the governor's office and state legislature, is one state that can set a national model of how to do reform right by adopting a Medicare for all type system.

Medicare remains one of the most popular social reforms in U.S. history. Expanding it to cover everyone is an idea favored by 58 percent of Americans, as a May Gallup poll demonstrated. It's the real healthcare reform we need.