Illustrative of his contempt for the truth, Mitt Romney's campaign website continues to host the following statement: "Since President Obama assumed office three years ago, federal spending has accelerated at a pace without precedent in recent history."

On Friday, we discovered yet another reason why this is a super-colossal lie.

With the end of fiscal year 2012, the Congressional Budget Office announced the 2012 federal budget deficit: $1.1 trillion. Taken purely at face value, this number is enormous. Yet every Democrat, and especially the Obama campaign, ought to be telling anyone who will listen: Not only has the president cut the deficit by $312 billion during his first term (so far), but he's cut the deficit by $200 billion in the past year alone. And the CBO projected that the 2013 Obama budget, if enacted as is, would shrink the deficit to $977 billion -- a four year total of nearly $500 billion in deficit reduction.

Okay, yeah, I get it. It's risky to mention the deficit, but not when you couch it in math and the facts.

As I've documented before, the CBO reported in January, 2009 that the federal budget deficit for that fiscal year, which began on October 1, 2008, was already $1.2 trillion. President Obama's additional '09 spending added another $200 billion to the deficit, bringing the total to $1.412 trillion. Unprecedented and huge, but given the enormity of the financial crisis and the depth of the recession, there weren't many other options on the table. Add two wars into the mix and there you go.

But since then, deficit spending has dropped precipitously. Why? Chiefly because President Obama signed the Statutory Pay-As-You-Go Act in February, 2010, which mandates that new spending be offset with spending cuts or new revenue. Yes, a Democratic president and a Democratic Congress passed this legislation. Guess how many congressional Republicans voted for the law. Zero. Not one. Perhaps during this week's debate, Vice President Biden could ask Rep. Paul Ryan who voted against the bill.

Consequently, the president is responsible for the lowest government spending growth in 60 years, according to the Wall Street Journal's Market Watch. 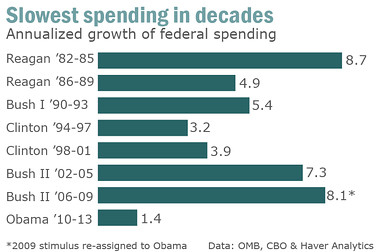 Once again, Mitt Romney's website still contains the words: "Since President Obama assumed office three years ago, federal spending has accelerated at a pace without precedent in recent history." Pants on fire times a thousand.

Fact: the president's record is exactly the opposite of what Romney says. And how long ago was this statistic released by the Wall Street Journal and subsequently affirmed by fact checkers? Five months ago. On September 26, when asked about his record of mendacious claims, Mitt Romney told CNN's Jim Acosta, "We've been absolutely spot on. And any time there's been anything that's been amiss, we correct it or remove it." Oh yeah? Well, Mr. Romney, you missed a whopper.

Furthermore, I can name two Democratic presidents who've cut the deficit through the duration of their presidencies: Clinton and Obama. And what about Republican presidents? Bush 43? He turned a $200 billion surplus into a $400 billion deficit by the end of his first term, and a $1.2 trillion deficit by the end of his second term. Bush 41? No. Reagan? No. Ford? No. Nixon? No. The last Republican president who cut the deficit was Eisenhower. By the way, I'm sick of hearing the farcical line about Congress "controlling the purse strings." Any six-year-old child who's watched a Schoolhouse Rock cartoon knows the president signs all legislation before it becomes law, including appropriations bills. The House can't magically spend money without a presidential signature. Besides, if the president is to be blamed for the size of the deficit -- and the Republicans have been merciless on the president in this area in spite of reality, and their own party's record -- it's only fair that he should get credit when the deficit is reduced.

Yet without objections, the Romney campaign and the Republicans continue to champion their status as "fiscal hawks" even though the facts prove that to correlate "fiscal responsibility" and "Republican Party" is absurd on its face. Even though Romney's plan for the deficit and the economy is as shifty, murky and ambiguous as he is, there appears to be nothing -- absolutely nothing -- about the Romney plan that's any different from every Republican presidential plan in recent history, but we're supposed to believe that Romney will cut the deficit anyway. In fact, as we all know by now, Romney is proposing $5 trillion in un-funded tax cuts, as well as massive increases in military spending, and, if Romney wins, you can bet the Republicans will jettison their deficit and debt hawkery into the next nearest memory hole to be forgotten until another Democrat enters the White House.

If the Obama campaign and the Democrats can talk about the deficit in these terms, it undercuts one of the leading Republican attacks and becomes a winning issue for the president. Plus it helps to cement the reality of Mitt Romney The Pathological Liar.

Cross-posted at The Daily Banter.
Subscribe to the uncensored and totally raw Bob & Chez Show After Party podcast.
Click here to listen to the Bubble Genius Bob & Chez Show podcast.
BobCesca.com Blog with special thanks to Rockville attorney Kush Arora.