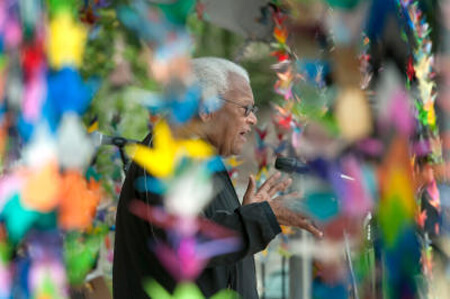 Speaking on behalf of indigenous people in Santa Cruz, Bolivia, earlier this summer, Pope Francis apologized for the role the Catholic Church played in oppressing Latin America's indigenous people. He called for a worldwide grass roots movement that would shatter global corporate abuses of "the new colonialism." When the Pope visits with political elites in the U.S., we hope he'll urge them to follow his lead and apologize for the genocidal destruction U.S. people waged against indigenous peoples. We in the U.S. should look toward indigenous people for guidance about ways to make reparations.

She and her community believe that lives devoted to land-based knowledge and ritual can properly develop and safeguard both character and health among practitioners. Caring deeply about nurturing the land and using appropriate seeds, they also cultivate lives of reflection and thoughtful connection to a larger world.

She spoke to us near the Trinity site, where, during World War II, the first atomic bombs, produced at Los Alamos, were tested. If we think about it, astonishingly strange seeds are planted there.

The U.S. government, at the cost of trillions of dollars, has taken over Beata's traditional lands, along with lands of neighboring tribes, to experiment with and plant nuclear weapons. To deter espionage, certain areas near Los Alamos, have been heavily planted with land mines.

The stage created for Beata and others to speak, on August 6 and 9, displayed thousands of colorful origami crane birds, 2,000 of which were made by prisoners in San Quentin. I'd helped string some of the crane birds together, and I'd come across one which had a name written on the underside of a wing: Tony. I wondered if Tony was one of the prisoners. I thought of the three local Air Force bases, White Sands Missile Range, the federal and Sandia National Research Laboratories, and I thought of souls trapped in San Quentin dreaming of flight. Are all of us waiting for the terrible plantings at Los Alamos, in a dreadful accident or in one of the swiftly developing moments of crisis looming in our future, to spring up from the earth, an inconceivable whirlwind we hope never to harvest?

Our shared future requires faith that whatever lays ahead, we think hard about ways to replant, atone for past genocides, sow life-giving seeds, and abolish the wars that contaminate our lands and lives. The tasks require what the Pope extols, a worldwide grassroots movement that recognizes unbridled capitalism as "the dung of the devil."