I've been traveling the past three weeks in Bangladesh and West Bengal visiting water, sanitation and hygiene (WASH) organizations and their field programs. I've covered a fair amount of ground and have seen the work of local governments, the UN and international and local NGOs.

Five to ten years ago many villagers did not have safe drinking water or a sanitary latrine -- the situation on the ground has improved. In Bangladesh, deaths caused by diarrhea have decreased significantly in the past several years.

Many folks I spoke with attribute the substantial drop in death rates to the increase in the amount of safe drinking water. In most villages I visited families had their own tube well, though some did share a well with a few other families. Before this rapid expansion of a water source close to the home, many families collected water from the ubiquitous unprotected ponds of Bangladesh and West Bengal. According to Water For People country coordinator Rajashi Mukherjee, "The ponds are absolute death traps; hygiene is the last thing you can associate with them." Fortunately, with the proliferation of tube wells, most people can now avoid collecting water from unsanitary ponds.

This progress underscores the solvability of the problem when there is a convergence of partners -- communities, local government, local NGOs and international donors and NGOs. The tube well example is interesting because it shows how scale can happen when an idea catches on and the private sector (mostly small businesses) gets involved. Nearly 8 million tube wells were sunk in recent years. Roughly 1 million were paid for and installed by the UN, government and other NGOs and 7 million by families/communities themselves by hiring private contractors. The scale of this push for clean water shows how progress was made when stakeholders perceived the need for clean water and took action into their own hands.

However the reality is that each year as many as 70,000 people still die of diarrhea in Bangladesh. In India the figures are astronomically higher, exceeding 450,000. In fact a few days ago there was an all-too-familiar report in the local Bangladesh paper that five people had died of diarrhea. This story demonstrates the significant challenge the people of Bangladesh still face.

One of the unfortunate and unforeseen side effects of the installation of the millions of tube wells is that a fair proportion of the wells are infected with naturally-occurring arsenic. Many programs have emerged to test and mark the wells, but large-scale solutions to rectify the problem are not yet in place. I did see several arsenic removal technologies of varying cost, but the very expensive options would be hard to bring to scale without large donor support. There were also other less expensive arsenic removal technologies that are still being tested that might hold promise in the future.

Overall the successful programs that I did see dealing with arsenic removal came about through contributions from the community level, local government and outside donor support. Besides the arsenic problem, greatly improving sanitation and hygiene will be essential to further reduce WASH-related disease and sickness and improve the quality of life for the people of Bangladesh and West Bengal. The governments in both countries have made promoting sanitation a priority. Unfortunately, many challenges exist on the ground related to education about sanitary toilets and appropriate hygiene. There was limited use of "infotainment," (using entertainment, such as television shows to pass key health and hygiene messages), even though some "infotainment" pilot projects appeared effective. Also there were an insufficient number of community health and hygiene promoters. The result is that people are not constructing or maintaining toilets or practicing good hygiene (such as washing their hands with soap). I did visit several communities that had achieved 100% WASH coverage. The trend in those communities was strong local leadership, active community health and hygiene workers and effective leadership from so-called "child brigades" to pressure the community into action. One idea being floated is to employ these local leaders as a cadre of "barefoot consultants" hired by other villages and local NGOs to greatly scale up these successes. 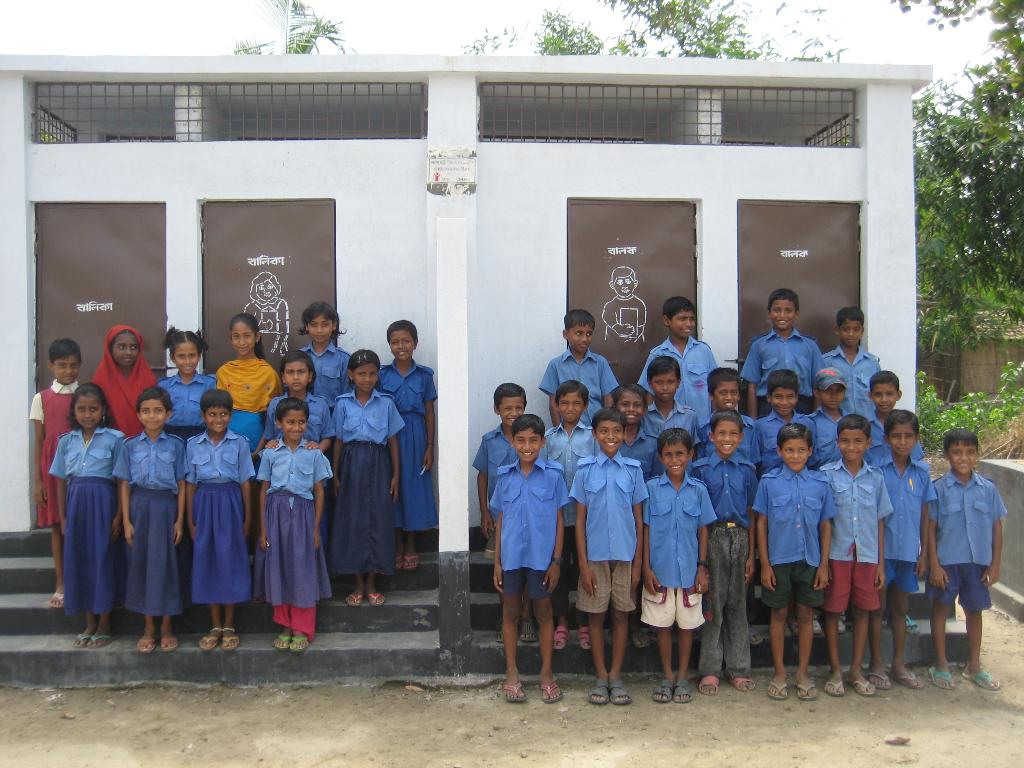 Photo: Separate gender toilet facilities at a school in Bangladesh made possible with support from H2O for Life and Save the Children.

Some of the most exciting work I saw in the field was improvements to the quality of WASH in schools facilities. In one of the schools I visited, the children had been involved in the design of their own toilets. The girls demanded a separate changing room where they could have privacy and an adjacent incinerator for safe disposal of sanitary pads during menstruation. Before these programs were in place many of the children missed school, walking home to use the toilet. Girls in particular would often miss three to four days a month of school, sometimes even missing exams.

I feel that it is possible for communities in Bangladesh and West Bengal to continue to improve their WASH conditions if they can enhance community leadership and capacity for WASH. There is a great opportunity to share success stories and best practices. Let's not forget the power of increasing the role of children and adolescents. It's equally important to recognize sanitation and hygiene as a matter of status and use it as a tactic to motivate people towards behavior change. There is a need to embed messages related to status into communities, so people will prioritize sanitation and hygiene.

Overall, I've been amazed at how much is happening on the ground. Despite the multitude of WASH problems, the issue seems entirely solvable here. Sanitary products are available everywhere, at reasonable prices and are accessible to almost everyone, except for the extremely poor and vulnerable. (I actually saw some very good examples of how motivated communities found ways to help out the poorest members of their communities). Communities transform with access to WASH--health improves, new job opportunities arise and more children finish school. I hope that donors take notice of this transformation and work with the people of Bangladesh and West Bengal to put this issue to rest once and for all.