I've been quite fortunate in the past year or so to have appeared not once, but twice, on the central science related panel at the progressive mega-conference Yearly Kos. As a result, I've been able to observe closely the ongoing integration of science into the broader agenda of progressive political advocates and the candidates they support.

In 2006 in Las Vegas, none other than General Wesley Clark headed up the Kos science panel and provided a powerful speech about the centrality of scientific research to our quest for national advancement and social progress. Clark's talk -- paralleled by recent efforts on the part of the Democratic Congress to draw attention to abuses against science by the Bush administration and to ramp up our national competitiveness in science -- showed just how much this sleeper issue has, in the past several years, gone mainstream and merged with core concerns of progressive voters and those who represent them.

The reason for this development is simple: our reality-challenged president. George W. Bush and others in his administration have repeatedly ignored fact and expert analysis on anything from global warming to the war in Iraq to the cost of Medicare prescription-drug reform. So it has fallen to those of us who oppose the direction the country has been heading to simultaneously champion a way of thinking that would have averted so many blunders and disasters: empirical thinking. Scientific thinking. Critical thinking.

In other words, you might say that now more than ever before, we're finally waking up to the fact that the practices of science themselves encode a set of values -- a way of approaching the world, understanding it, and acting within it. At its core, it's a world view that is humble about what we know and don't know, flexible about what we do and don't decide to do, and open about admitting past mistakes and listening to contrary opinion. In short, it's the utter opposite of Bush's stubborn, inflexible, unwavering certainty about everything.

This year at the Yearly Kos science panel -- set in Chicago -- we were not graced by the presence of a famous politician. Yet once again we had a very large crowd, I would guess over 200 people. And once again, the talks honed in on this intersection between a scientific approach to understanding reality and the set of values that flow from that approach.

I opened the panel by airing some lessons from my new book Storm World. The scientific relationship between hurricanes and global warming, I explained, remains murky and incompletely understood. But that hardly means that we ought to throw up our hands and ignore the subject, or simply wait for more research to come in. On the contrary, we have quite a lot at stake; so I argued that we have every right to be worried that storms might be getting worse, and ought to move now to better protect ourselves against them.

That highlights a fundamental truth about most science policy issues: the inescapable fact of both science and reality is that that we never know everything, and never will. Yet this pervasive state of uncertainty hardly lessens the moral imperative to take whatever it is that we do know and use it to improve our lives; and if we fail to do so -- because the issues are too politicized, say -- in the end we will have only ourselves to blame.

After I spoke, physicist Sean Carroll of Caltech and Cosmic Variance addressed a vastly different subject that, nevertheless, led him back to a similar theme. Sean's talk was about, well, the nature of the universe. Mystery solved: It turns out that it's roughly 5% stuff like us, 25% "dark matter," and 70% "dark energy." Or as Sean joked: "The good news is that we understand a lot about the universe. The bad news is that it makes no sense."

But even as Sean gave us a complete and highly entertaining tour of reality, he hit on a much broader theme. The latest research in cosmology suggests that the universe is friggin weird. Indeed, there's probably no bigger blow to the human ego than the fact that because it is of an incomprehensible "dark" nature, "most of the universe can't even be bothered to interact with you," as Sean put it. Nevertheless, he concluded that there's something deeply uplifting about a way of thinking that allowed us to not only uncover but embrace this jaw-dropper of an inconvenient truth -- something that we would never have expected to find, but that becomes inescapable once you survey all the evidence. And by the same token, Sean pointed out that there's something rather shallow and small about an outlook that can't be bothered to confront facts of this unsettling nature.

The final speaker, Ed Brayton of Dispatches From the Culture Wars, brought us back from distant galaxies and into our own communities: He focused on the religious right's extraordinarily successful campaign to pack school boards with anti-science ideologues, a strategy that has resulted in continual legal explosions across the country. In particular, Ed honed in on the well-known Dover, Pennsylvania "intelligent design" case from 2005 as well as a lesser-known example that he's been following closely: The decision by a public school board in Odessa, Texas, to put in place a plainly unconstitutional Bible course.

In contemplating these case studies, Ed drew a distinction between "mundane ignorance" (everyday not-knowing-something, of which we're all repeatedly guilty) and what he called "virulent ignorance": the willful disregard for contrary knowledge and opinion in favor of a set of dubious "facts" that are the result of ideology and indoctrination. To rescue our school boards (and children) from the often virulently ignorant candidates of the religious right, Ed noted that it is long past time for the "people of reason" to run for these offices and provide a little competition. In short, in the face of these repeated assaults, we have to stand by our own set of values.

And if the three Yearly Kos science talks highlighted the values implicit in the scientific world view, they also showed that science is anything but stuffy and boring -- au contraire, it's a heckuva lot of fun. Indeed, I'd venture to suggest that ours may have been among the most entertaining panels at Yearly Kos. Without retelling any of our jokes -- which can't really be recaptured -- suffice it to say that there were many moments when the audience was all but rolling in the aisles. Ed Brayton is trained in stand-up comedy, so this we expect; but I'm happy to say that Sean Carroll and I also drew our fair share of laughs.

A number of folks deserve thanks for helping this panel happen: Tara Smith was our very able moderator; DarkSyde of Daily Kos helped set the whole thing up; Lindsay Beyerstein did a great job snapping pictures (see her blog for examples, including the one below); and Jennifer ("Unstable Isotope") helped ensure that all the technology worked.

My thanks to you all for defending the values of science, reason, and the Enlightenment. 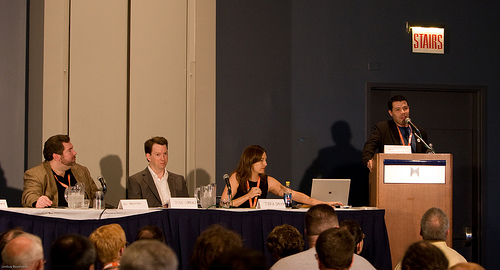