As the U.S. Commission on Civil Rights prepares to release its final report on the much-hyped case of New Black Panther Party voter intimidation at a polling station in 2008, signs are already emerging that the findings will further whet conservative appetites.

In a little-noticed letter sent to the commission in late September, Joseph Hunt, the director of Federal Programs at the Department of Justice's Civil Division cautioned that excerpts of an early draft of the report contained various inaccuracies that bordered on deliberate politicization. Hunt, whose office has been accused of brushing the NBPP case under the rug because of the political damage it would cause to President Obama's election and his department, didn't mince words.

Going through some of the report's more contestable assertions he expressed concern about "the impartiality of this draft and whatever conclusions reached by the Commission arrived based on it."

The findings by the commission won't be known for a little time. Lenore Ostrowsky, the Acting Chief of its Public Affairs Unit explained to the Huffington Post that the commission was merely holding a vote on Friday as to whether or not to approve the body of the report (see correction below). But the betting money among those who have followed the bizarre drama is that print they shall.

(Full disclosure: My wife works at DoJ but is not involved in any way with this issue.)

If the commission does report, the likelihood of fireworks seems high. The committee has pressed the case that Obama's Department of Justice refused to apply civil rights law with respect to the members of the NBPP who stood outside a Philadelphia polling station on Election Day in 2008. The allegations have always carried an element of opportunistically-selected anecdotal evidence. For instance, no actual voters claimed to have been intimidated by the NBPP members. The NBPP itself disavowed the actions of its two members. And while the optics of white voters being scared into staying home made for compelling drama, it ignored the fact that it was a predominantly black polling station at which the NBPP members protested.

In January 2009, the Bush Justice Department concluded that it could not bring a criminal case against the two men, and filed a civil lawsuit instead. In May 2009, the Obama administration dropped charges against everyone except King Samir Shabazz, the head of the Black Panthers' Philadelphia chapter who is now prohibited from protesting at polling stations until November 2012. But the entire saga was given new political life when Christopher Coates, the Justice Department lawyer who originally brought the case, alleged that the voting rights section had been "hostile" to any cases except those involving minority voters being victimized.

The flames have also been fueled by conservative media -- which remains convinced that something nefarious took place -- and J. Christian Adams, an attorney who worked under Coates in the Bush Administration. Adams had insisted at the case's onset that it was a "slam dunk." But an email he sent before he made that assessment showed that he lacked any concrete evidence to reach that valuation.

"I'm trying to speed things along and wanted to make sure my assessment of the chronology and facts are consistent with your information," the email from December 2008 read. "The chronology of the calls, and by whom, and what the panthers said to these people is going to be important, very important. Under the statute, a black poll watcher for you being abused or insulted is critical, and thus far, I don't have one." 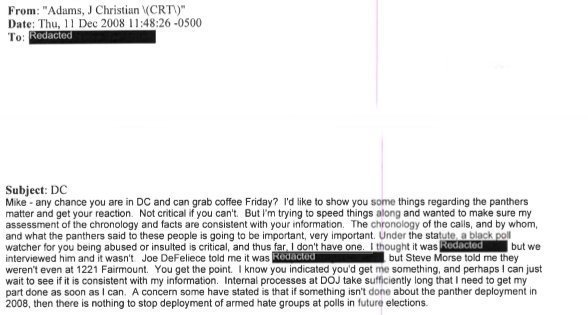 Whether Adam's email makes it into the final commission report remains to be seen. But Hunt clearly had issues with the material that was excerpted in earlier drafts. Writing to David Blackwood, the general counsel on the commission, he complained that "selected portions of the draft" relied "heavily on unsubstantiated press accounts, while largely ignoring the more than 4,000 pages of documents and interrogatory answers that the Department provided to the Commission in connection with this matter."

As examples, Hunts offered the following:

...the draft states, 'If no plausible explanation is offered is offered for overruling numerous career lawyers, it raises questions as to whether the purported explanation is accurate and/or legitimate' However, the Department has indeed explained the decisions to dismiss some of the claims in the complaint through the Department's answers to interrogatories and the testimony of the Assistant Attorney General for Civil Rights... The commission's unfounded decision to ignore explanations such as those does not negate their accuracy or legitimacy.

The chronology appended to the draft omits important facts, such as the New Black Panther Party's disavowal, on its website, dated November 2008, of conduct at the Philadelphia polling place, and its notice suspending the Philadelphia chapter in January 2009

Numerous smaller errors also appear in the draft. For example, the Associate Attorney General's name is repeatedly misspelled and Julie Fernandes is one of four Deputy Assistant Attorney General for Civil Rights, and thus it is incorrect to refer to her as "the" Deputy.

Ostrowsky would not say whether the final copy of the commission report addresses Hunt's concerns. But she did note that the letter sent was "circulated to all the commissioners so that they are aware of the affected agency's response." The commission did not respond directly to Hunt's concerns, though it did send follow up letters to DoJ requesting additional information.

"If there are substantive corrections," said Ostrowsky, "these changes are made in the body of the report."

UPDATE: In an email after this article was published, Ostrowsky relayed exactly the process by which the report will become public.

The vote by the Commission merely approves (or not) the body of the report. If it is approved, Commissioners have a few weeks, usually but not always 30 days, to write individual statements that would be included with the report. Following that, Commissioners have a few weeks (usually) to write rebuttals, which are also included with the report. The statements and rebuttals are not voted on. So it might be as long as 60 days after approval before the report could be prepared for printing. The Commission does not specifically vote to send a report for printing.