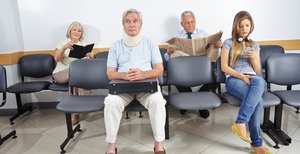 I have written a number of times before about the growing importance of prevention rather than cure. With western society ageing and healthcare systems struggling to maintain costs, it will become increasingly important that we shift towards keeping the populous healthy rather than caring for them when they're ill.

There are a wide range of efforts currently underway to improve matters in this regard. For instance, most of our health related journeys begin with a search of Google, with the search giant suggesting that roughly 1% of all queries are symptom related to some extent.

The results returned by such queries are not always the best however, and back in 2014 doctors in Belgium launched a campaign urging people not to turn to 'Dr Google' but go to a real professional instead. In an attempt to improve matters, Google recently announced an effort to improve the results returned when we tap in a health related query.

Now, when you type in a symptom, Google will return a number of possible illnesses, together with some potential self-help treatments.

"We worked with a team of medical doctors to carefully review the individual symptom information, and experts at Harvard Medical School and Mayo Clinic evaluated related conditions for a representative sample of searches to help improve the lists we show," Google say.

This kind of self-help triaging service is also behind the latest offering by telehealth pioneers Babylon. They have developed an AI based service, which is documented in here, which allows users to input their symptoms and the system will return what it thinks is the best course of action.

The system was put through its paces alongside both registered doctors and nurses, and scored better than both in the accuracy of the response (~75% for the professionals vs ~90% for the AI), and significantly better in terms of the time taken to deliver the response.

Of course, in many of these cases the individual will still be referred to a doctor, but it's an example of what a recent paper is dubbing pre-primary care.

The paper defines pre-primary care in much the same was as Airbnb define hotels, with care providers having no physical premises to speak of, or even professionals of their own.

It covers the kind of tasks an individual might undertake before they visit a doctor, including:
"New concepts like pre-primary care are important given the broad consensus on prevention and the need to improve quality of care just as demand rises from our ageing population. So this is the right discussion to have as we seek new approaches to build a genuinely 21st Century health service,
" says health secretary Jeremy Hunt.

Of course, these things aren't necessarily that new, with most health providers offering telephone or online based symptom checkers, and millions of people using wearable devices to track their health and wellbeing.

Indeed, I would argue that this is but the start of a trend towards greater self-management whereby health data generated by us around things such as our sleep patterns, dietary intake, exercise levels and maybe even things such as cholesterol or blood sugar levels will be taken on a daily basis, with either our doctor, or more likely an AI, raising the alert if things aren't as they should be.

I suspect a major challenge will be to ensure the Matthew Effect doesn't strike in digital health as it has in so many other fields. This will always be a challenge however whenever you place more power in the hands of people to manage their own circumstances.

When I spoke to Matteo Berlucchi, boss of Your.MD, he suggested that perhaps the best approach would be to ensure that the information available to all people is as high quality as possible, and thus even if the gap between rich and poor (or motivated and unmotivated) widens, the overall quality will rise for all.

A London based innovation scout