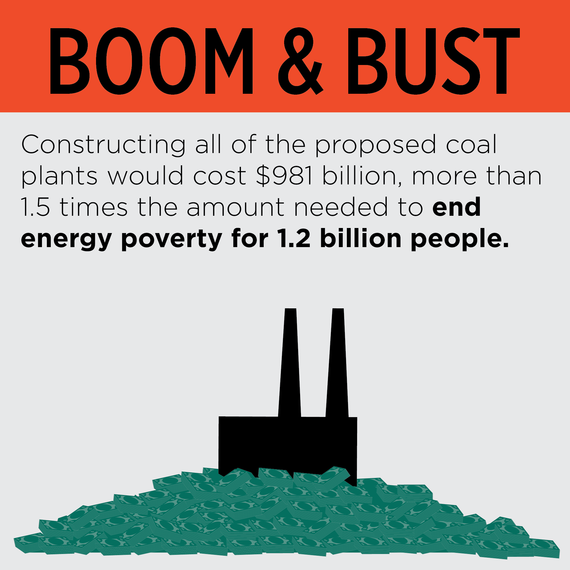 Nearly a trillion dollars -- $981 billion to be exact. According to a report released today by the Sierra Club, CoalSwarm, and Greenpeace, Boom and Bust 2016: Tracking the Global Coal Plant Pipeline, that is the estimated amount that could be spent on the global coal plant pipeline. It is also more than one-and-a-half times the cost to end energy poverty according to the International Energy Agency's (IEA) Energy for All Case.

But instead of solving a global crisis, those trillion dollars may go down the drain, supporting potentially stranded assets in the dying coal industry.

Today's report is an update to last year's report on new and proposed coal plants worldwide. Last year, we found an industry in peril, with two proposed plants shelved or canceled for every one completed. The news isn't any better for the industry this year.

Worldwide coal use has dropped for the past two years, but the industry continues to ignore this trend and build new coal plants. This is not surprising, given that no industry wants to admit it is obsolete, but the staggering lack of foresight will only accelerate the collapse of coal. Nowhere is this more evident than in China, which is still building new plants even while use of its existing fleet has fallen below 50 percent. And China is not unique. We are seeing utilization rates fall among big coal consumers, including the European Union, the United States, and India. 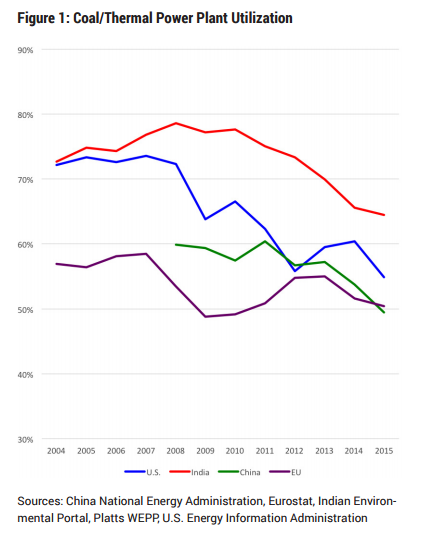 Graph from page 5 of this year's report.

Big banks like JPMorgan Chase, Bank of America, Citigroup and Morgan Stanley are backing away from coal. In Indonesia, the world's largest exporter of coal, mining companies are asking for public subsidies and a raid of the country's pension fund to keep business afloat. Research shows coal mines in Australia, the second largest exporter of coal, are one of the riskiest investments in the world, while banks across the globe are rejecting the flagship Carmichael coal mine in Australia's Galilee Basin. In the U.S., Peabody has warned it may file for bankruptcy, following in the footsteps of Alpha Natural Resources, Arch Coal, and Patriot Coal. In March, China ordered a halt in new coal plant permits in 13 provinces, a move that follows the announced closure of a thousand coal mines earlier this year.

While the economics of coal falter, clean, renewable energy is booming. Coal is not cheap, and we are already seeing renewables like wind and solar beat fossil fuels in the energy market. Solar costs less than coal in parts of India. Unsubsidized wind is the cheapest energy in the UK and Germany. These trends will only continue as renewable technology advances, making the decades-long investment necessary to build a new coal plant a poor choice in comparison.

At the same time as the economics for new coal plunge, the retirement of existing coal plants is accelerating, led by the U.S. and EU. Even if no new coal plants come online, existing coal plants will still release 150 percent more carbon than what is compatible with two degrees warming. The data proves these plants would further endanger our climate. New coal plants will likely operate for at least 40 years, releasing far more climate disrupting pollution over their lifetime. With per capita emissions in the industrialized world far exceeding the rest of the planet, it is imperative that the richest countries do their part to phase out coal.

But what about the 1.2 billion people without access to electricity? It turns out coal is a bad choice for them as well. A recent report from the Overseas Development Institute and Oxfam showed that distributed clean energy, not coal, is best suited to meet the needs of the rural poor. Grid extensions are expensive, and new thermal plants support existing users and industry, which are already connected and can afford to pay more for power. Distributed off-grid and mini-grids, in comparison, generate energy where it is needed and support local communities. The failure of coal is perhaps best seen in India, which added 95,000 megawatts of largely coal generation since 2001 while barely putting a dent in rural energy poverty. This is why the IEA's Energy For All Case calls for over half of investments to go toward mini-grid and off-grid solutions.

And it is not just energy access and climate at stake. Coal kills. Estimates show that 800,000 people die every year due to air pollution from coal plants, and that number will grow by another 130,000 if the current pipeline is completed. This doesn't even include water pollution or the mining industry. If unchecked, we might waste nearly $1 trillion on a sector that could kill one million people a year. And this won't even save the dying coal industry. Coal use is falling, and we've seen that new capacity isn't changing the trend. It's time to stop wasting money and instead invest in cutting-edge clean energy solutions and ending energy poverty.