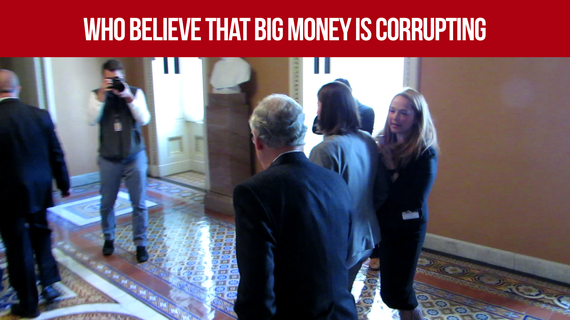 Yesterday I asked Senate Majority Leader Mitch McConnell for his thoughts on Democracy Spring, the historic protests calling on Congress to take action on big money in politics, and taking place this week in the Capitol plaza.

Mitch McConnell is the number one foe of campaign finance reform. We got a glimpse inside his thinking on the issue with The Undercurrent's release of the Koch tapes in 2014, detailing McConnell's commitment to deregulating money in politics throughout his time in elected office.

It is abominable that the Senate Majority Leader believes that the passage of the McCain-Feingold campaign finance reform bill was the "worst day" of his political career. I asked him if he agreed with the 85% of Americans that believe that there is too much money corrupting our political process, and his silence was deafening. Democracy Spring Communications Director Peter James Callahan followed up with, "Are you bought and paid for?" Watch the video below for McConnell's response.

On Monday, U.S. Capitol Police said they arrested more than 400 demonstrators in the Democracy Spring non-violent protests, calling the number "unprecedented." Protesters' spirits were high and there were no incidents. Democracy Spring will continue each day this week and then "Democracy Awakening," a parallel movement made up of unions, civil rights, student, women's, and other organizations, will host teach-ins, a rally, and another day of civil disobedience with Congressional lobbying.

Disclosure: I am also the executive director of American Family Voices, an endorsing organization of Democracy Spring and Democracy Awakening.