Depressing fact of the day: Reporters no longer earn above the national average wage.

Journalists earned about $2,080 less than the average wage for all US workers in May 2013, American Journalism Review said Monday. The mean salary for reporters and correspondents has lagged significantly behind other professions in the last ten years, sitting at $44,360 in 2013.

Here is a chart showing wage growth over the last decade, via American Journalism Review: 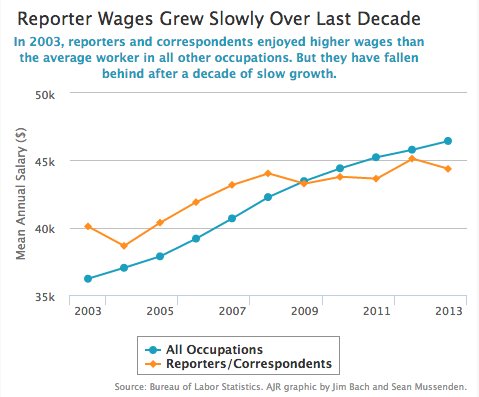 The journalism profession, which has long been known for its low pay, has been unable to keep up with the growing rate of US inflation and is far from where it was in 2003 when reporters earned higher wages than the average worker in all other fields. While the mean salary for reporters and correspondents grew 10.7 percent from May 2003 to May 2013, the mean salary for all other US workers grew significantly more-- 28 percent-- during that same ten-year time span.

What's more, reporters and correspondents are at the bottom of the pool even within their own industry, according to the Bureau of Labor Statistics. Reporters' average pay falls dramatically below that of other media industry jobs, like editors, writers, and PR professionals: 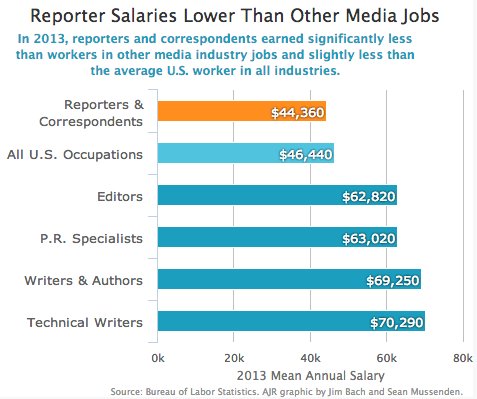 AJR pointed to two reasons for the wage drop: a lesser demand for reporters and a greater demand for jobs among graduates. Sweeping layoffs across news companies have left thousands of reporters without work in recent years, with 2,600 full-time journalist jobs cut in 2012 alone. A newspaper reporter was ranked as the second worst job in the United States according to a recent jobs report, yet the high demand for employment in today's economy leaves many college graduates still willing to work for low wages, AJR said.