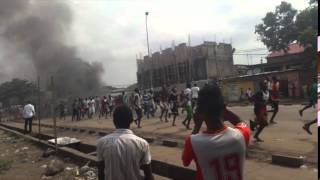 This Monday, January 19, 2015, most of the Democratic Republic of the Congo is in turmoil. The civilian population has been on the streets from the West in the capital city of Kinshasa to the east in cities such as Bukavu in spite of Joseph Kabila's police brutally attacking and repressing the people from exercising their right to protest. And, according to the UN's MONUSCO's media outlet, Radio Okapi, Martin Kobler, the UN special representative, has deplored the killing of civilians by Joseph Kabila's forces.

The Congolese people are marching in order to stop Joseph Kabila from changing the Congolese constitution so that he can remain in power past December 2016, the end of his second and last term as prescribed by the DRC constitution. Since last year, the United States through its Secretary of State John Kerry and President Obama's special envoy to the African Great Lakes and to the DRC, former Senator Russ Feingold, have frankly told Joseph Kabila that the US will not support nor accept that he changes the DRC constitution for him to stay on as president of the DRC. France, England, the EU, and the UN all have told him the same thing. 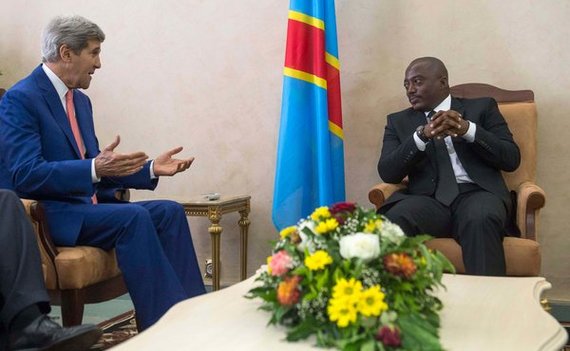 Secretary Kerry signifies to Kabila the US is opposed to "president-for-life" (photo cr: NYTimes)

Yet, Joseph Kabila, backed by his mentors Paul Kagame of Rwanda and Yoweri Museveni of Uganda, has been doing everything to go against the wishes of the Congolese people as well as against the advice of these governments and institutions. So, now, he has come up with a scheme that will allow him to remain in power way beyond 2016. He has just gotten the Congo House of representatives (bribing each member with $100,000) to vote, in the middle of the night, a bill that contravenes the prohibition of a third term in the constitution by agreeing, pending the Senate approval, that before elections are held a census of the population has to be completed, which might last at least three years beyond 2016. Though the DRC Constitution demands it, as those who follow the DRC politics know, yet, in 2006 when Joseph Kabila was "elected" for the first term, this Census was not taken. Neither was it taken during the 2011 election when he was "re-elected" for his second and last term. Therefore, it is an open secret to everyone that this new bill requiring a census is just a plain and open ploy intended to allow Joseph Kabila to remain in power past his constitutional terms.

This is why this Monday, the 19th of January, the opposition parties mobilized the people to march and prevent this vote from taking place, just as it was done in Burkina Faso last October 2014, which led to the overthrow of their president, Blaise Campaore.

But, while in Burkina Faso the soldiers and police refrained from shooting at or from blocking the people from marching onto the parliament, in the Congo, Joseph Kabila, who has recruited foreign forces from Rwanda, Uganda, Tanzania, South Africa, and Zimbabwe, has given them Congolese police and army uniforms and has been using them to block the population from getting close to the Parliament, and they have shown no restraint in their brutality and no hesitation in using live ammunition against the marchers, in spite of the United Nations' MONUSCO warning Joseph Kabila against using these foreign forces against the unarmed Congolese civilians.

This is not new for Joseph Kabila to take actions against the people of the DRC he is supposed to serve and protect as their president. Since becoming president of the Congo in 2001, the atrocities and the rapes have never ended in eastern Congo, and he has never condemned Paul Kagame and Yoweri Museveni for their responsibility not only in the Rwandan genocide, but also in the atrocities taking place in eastern Congo since, even when the United Nations has published reports exposing their role in these atrocities. One reason may be, as it is mentioned in the Mapping Report of 10/1/2010, that Joseph Kabila, a Rwandan Tutsi who was "adopted" by the Congolese Laurent Kabila, was an officer in the army of Paul Kagame that, in 1996, invaded and committed the genocide against Rwandan Hutu, moderate Tutsi refugees, and the Congolese who helped them in the DRC.

A more glaring example of Joseph Kabila's lack of concern and even his working against the Congolese people is how, at the end of 2014, Joseph Kabila confiscated the bank account of Panzi Hospital, the institution and facility that was founded and is run by the icon Dr. Denis Mukwege, an institution that treats and saves the lives of rape victims in eastern DRC. 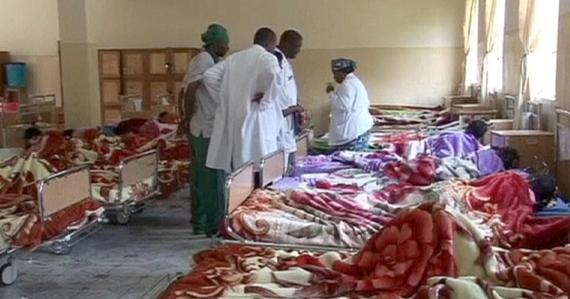 One action that President Obama and the Western leaders could take in the Congo is to demand that these African countries that have lent their troops to Joseph Kabila for him to use them against the Congolese civilians to recall their troops back. It is unconscionable that an innocent people continue to be killed and be betrayed by their own president, albeit that the diplomats in Kinshasa refer to him as "le petit rwandais", who is supposed to serve and protect the Congolese people.

No one would blame America and the free world if they decided to save the lives of the remaining Congolese civilians by removing Joseph Kabila.