On Saturday, six Republican candidates for president joined Speaker Paul Ryan, Senator Tim Scott, and other members of their party for a forum on poverty in America. Some of what they said made sense. Much of what they proposed did not.

We'll get to the policy disagreements in a moment, but while it may be tempting to write the whole exercise off as a publicity stunt, that would be a mistake. Whatever their motives, the participants expressed some resonant sentiments. Talking about the poor themselves, Jeb Bush made an obvious point that bucks the hard-right meme that the poor have little desire to improve their lot: "the notion of some that somehow they want to be there [i.e., in poverty] is just totally ridiculous. It is totally wrong."

Research on high poverty neighborhoods, where good jobs are often long gone, underscores House Speaker Paul Ryan's point about the extent to which the poor are isolated. And John Kasich and others were absolutely right to stress the importance of building pathways to help those with criminal records get into the workforce. Bush, Chris Christie and Ryan touted the importance of extending the Earned Income Tax Credit to groups of poor workers who still fail to benefit from this wage subsidy.

But talking isn't walking, and their rhetoric was undermined by their disregard for three fundamental realities: 1) the unwelcoming job market, or the demand side of the equation, 2) the evidence against many of the strongly held views that (mis-)inform their diagnoses and prescriptions, and 3) the impossibility of reducing poverty and creating opportunity given their proposed budgets.

On the first point, a misguided idea persists that if only poor people had more skills, better marriages, and better education, the job market would be theirs for the taking. But poverty is not a personal failure; it's a market and policy failure. If work is to be a ladder out of poverty, there must be full employment, rising real wages throughout the wage scale (not just at the top), and a robust system of supports to close the gap between what poor families can earn and what they need.

Stable families, quality education, and skill development are obviously valuable. Yet despite Ryan and Scott's claims to the contrary in an op-ed before the forum, "a quality education and a good paycheck" are not "the ticket out of poverty." If that were true, we wouldn't see large gaps in student achievement when students enter kindergarten, study after study finding that most of the discrepancies in achievement are due to non-school factors, and, as shown below, economic mobility rates for poor college graduates that are worse than those for wealthy non-graduates. 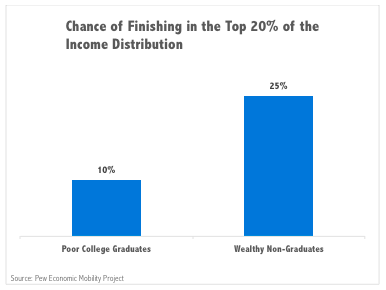 Similarly, Mike Huckabee's claim that "you can eliminate most of [poverty] by instilling in people that [marriage] is a virtue" -- i.e., that poverty is an effect of people not recognizing that marriage is "good and wholesome" -- is completely wrong. Shawn Fremstad and Melissa Boteach point out that "working-class people seem to value the cultural and religious aspects of marriage as much or more highly than more-educated adults." Stable homes and families are certainly beneficial for children, and two incomes are more than one, but there's a reason poverty rates for married families in the United States are higher than poverty rates for single mothers in Finland, Norway, and Sweden: the American government offers less of a safety net for all types of families than do governments around the world.

Second, there's the evidence deficit. One of the most egregious issues here is that Ryan, AEI President Arthur Brooks, and several candidates continue to claim that government spending on poverty programs has been a "stalemate" (Ryan) or made things "much worse" (Ben Carson) because poverty rates today are about the same as they were when the War on Poverty began. But as anyone who works in this area must know, the official poverty rate doesn't capture the effects of the very safety net programs being construed as failures.

Poverty expert Bob Greenstein makes a particularly telling point here: "At a hearing a few years ago over which Speaker Ryan presided...every witness (including the conservative witnesses Ryan himself selected) said that analyzing poverty trends in this way isn't valid. Instead, when analyzed properly -- by counting benefits like the EITC, SNAP, and rental assistance -- the poverty rate has fallen significantly." In fact, while the safety net lifted about 5 percent of otherwise poor families above the poverty line in 1967, it lifts over 40 percent of such families over that line today (see figure below). 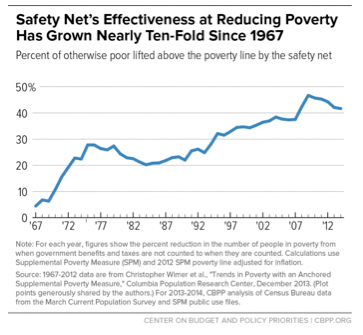 Another evidence-free meme from the forum was that today's safety net only treats poverty's "symptoms," as Rubio put it, suggesting it provides only immediate relief from poverty as opposed to an investment in the future of the poor. But a large and growing body of research demonstrates that giving benefits to families now bolsters outcomes later in life for the children in those families; that's true for Medicaid, SNAP (formerly food stamps), the EITC, and direct cash transfers to poor people. Helping poor people now isn't a "trap," as Ryan contends; it's a springboard.

Their failure to appreciate the evidence on the safety net extended to the speakers' discussion of the welfare reform law of 1996. While they touted it as a success, they ignored three facts that contradict that narrative: 1) welfare reform caused an increase in deep poverty, 2) TANF, the program created under welfare reform, helps far fewer poor people today than the program that came before it (see figure below), and 3) welfare reform made the safety net less effective at reducing hardship during the last recession. These points are all salient when considering a highly touted proposal at the forum: converting SNAP and other safety net programs into a block grant for states to administer. The historical erosion of funding under block grants and the loss of the countercyclical features mentioned above are prime reasons such a proposal would be expected to increase poverty and hardship, not decrease it. 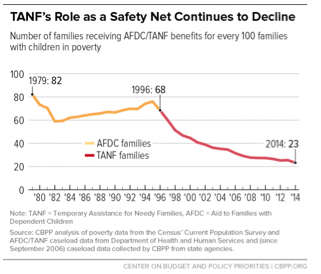 Aside from these (and other) erroneous claims about the safety net, the most absurd assertion of the night came from Christie: "the single most destructive force for public education in this country is the teachers union." Two simple facts illustrate how very wrong he is: 1) students in states with stronger teachers' unions do at least as well as students in so-called "Right to Work" states that limit union strength and 2) many countries that are considered to have strong educational systems have much stronger teachers unions than those in the United States. In fact, unions push back on poverty by raising wages, reducing inequality, and boosting opportunity for kids of members and non-members alike, and teachers unions are one of the few interest groups that consistently advocate for low- and middle-income interests.

Finally, a huge problem got nary a mention at the forum: the budgets proposed by most of these politicians, including Ryan, will decimate low-income programs in the name of enriching the wealthy. They will also preclude Ryan's stated desire to use evidence-based methods to learn about what works.

As Greenstein points out, almost two-thirds of the spending cuts in recent Republican budgets are taken from programs for low-income people: "those budgets' severe cuts in assistance for meeting basic needs, making college more affordable, and the like would inescapably increase poverty and hardship."

And it gets worse. These GOP budgets assume that federal revenues stay about where they are now. But the Republican candidates are proposing trillions of dollars in tax cuts, setting the table for even deeper cuts than the ones in Ryan's House budget.

Again, we applaud the GOP's new rhetoric about the importance of reducing poverty and boosting opportunities. And we appreciate their call, first voiced by Ryan and Scott in their op-ed and then summarized by Carson at the forum, for making policy based "on evidence, and not on ideology." But how is that goal consistent with the speakers' disregard for the inconvenient truths noted above? Or with cutting the budgets of the Census and the Bureau of Labor Statistics (note that some of these agencies' proposed work is for more accurate poverty measurement)?

These speakers' walk is clearly not yet equal to their talk. If they're serious about helping the poor, their policy proposals need to look a lot different.