WASHINGTON -- The recent endorsement of presidential candidate Mitt Romney by South Carolina Gov. Nikki Haley and the Des Moines Register are the highest-profile examples of a larger trend: While the pace of endorsements remains slow compared to other recent GOP nomination battles, Romney has been steadily increasing his share from the upper echelons of the Republican Party, while endorsements for the other candidates remain stagnant.

An analysis by The Huffington Post shows that Romney has nearly tripled his endorsements from the Republican Party establishment over the last three months. He has been endorsed by 59 Republican governors, members of the U.S. House and Senate, and state party chairs, up from 22 at the end of September. Over the same period, Romney's share of all the endorsements issued so far by these categories of Republican officials has increased from 46 to 65 percent. 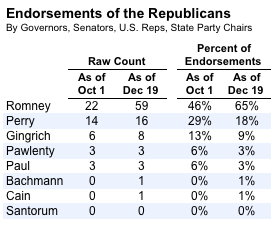 In contrast, the other Republican candidates have made little or no progress winning over the GOP establishment at this level. By Oct. 1, for example, Newt Gingrich had won endorsements from just six members of Congress, four from his home state of Georgia plus two from Texas. Since then, despite briefly rocketing to the top of public opinion polls, he has picked up only two more endorsements in this universe: Georgia Gov. Nathan Deal and Rep. Andy Harris of Maryland.

The overwhelming majority of these Republican officials have yet to take a public position on the presidential contest. As of this writing, just 25 percent of Republican governors, members of Congress and state party chairs have endorsed a candidate, slightly less than in 1979 and 2007 and far behind the pace of 1987, 1995 and 1999 -- all contests without a Republican president running for reelection. Many major officeholders who traditionally endorse a presidential candidate remain on the sidelines. 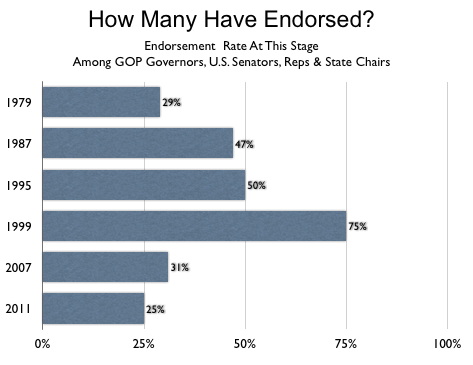 Do endorsements matter? Elected officials rarely "deliver" votes in the manner of the party bosses who once controlled large blocks of convention delegates. But political scientists have demonstrated that endorsements by party leaders and activists are an important indicator of the state of consensus on a presidential nominee. And while an individual endorsement may not swing many votes, a larger pattern of endorsements can send a message about whether a candidate has what it takes to win the general election and serve as president.

In their book, "The Party Decides," political scientists Marty Cohen, David Karol, Hans Noel and John Zaller found that candidates' shares of endorsements just before early primary elections is often a better predictor of the ultimate nominee than early polling is.

Cohen and his colleagues catalogued all endorsements in presidential contests since 1980 by any individual or institution in and out of government that merited news coverage. The HuffPost analysis focuses more narrowly on top-level elected officials -- governors, party chairs and members of Congress -- because that more-defined universe allowed not just raw counts but also a calculation of the rate of decision-making by potential endorsers.

While much of the Republican establishment has yet to endorse, Romney's dominance among those who have now exceeds or rivals that of recent Republican presidential nominees at this stage in the electoral cycle. His 66 percent share of top-level endorsements exceeds the share of three of the last five Republican nominees -- Ronald Reagan in 1979 (52 percent), George H.W. Bush (60 percent) and John McCain (27 percent) -- and nearly matches a fourth, Bob Dole in 1995 (68 percent). Only George W. Bush in 1999 (77 percent) did better. 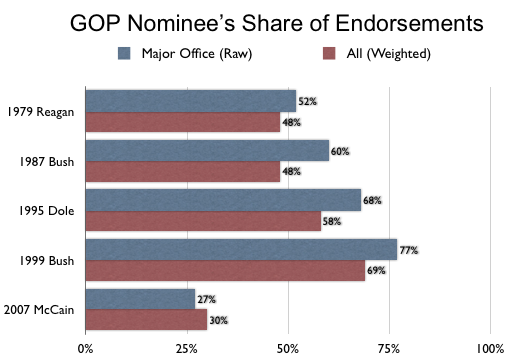 Romney's share of endorsements may be lower at the grassroots level. For example, the recent Huffpost-Patch Power Outsider survey of a nonrandom sample of local Republican activists and elected officials in the early primary and caucus states finds that, although about one-third had publicly endorsed a candidate, Romney was the choice of only about one in four (17 out of 62 who had endorsed).

The decline of Newt Gingrich in recent weeks in national polling is evidence of the power of testimonials, although in his case it was more the power to dissuade than to promote. Gingrich has been under assault from a number of current and former Republican elected officials and pundits (as seen in this "Daily Show" mash-up), and that pounding has had an impact, particularly with so few high-profile endorsers defending Gingrich.

So far, his success with endorsers has not raised Romney's support in public opinion polls, either nationally or in the early primary states. But the endorsements may play a larger role in the immediate aftermath of the Iowa caucuses and the New Hampshire primary. The last two Democratic presidential nominees saw their numbers soar in this period, with endorsement from their party's establishment playing an important role. The Romney campaign would do well to follow that pattern.