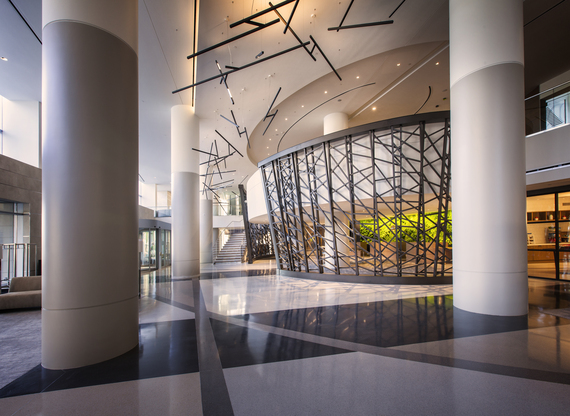 No matter what your politics, who doesn't want a front row seat to Republican National Convention this year? It's already being called a real-life "Game of Thrones" and why not? The unpredictable fireworks, antics and drama ensure this will be summer's hottest show.

The Hilton Cleveland Downtown is the official hosts of the RNC. This new hotel, which opened on June 1 soars 32 floors. It was chosen for its location in the revitalized downtown, where cranes are becoming the city's "bird" since so many construction projects are going on. Underground passages will sprint delegated and pols from the hotel t the convention center.

Even if you can't book a room during he convention since the 600 rooms are said to have been largely filled by some of the 5,000 or so delegates and alternates, not to mention the 15,000 strong army of media who will descend on the city in July. However, hang out in the lofty lobby and catch a glimpse of Washington power brokers.

The Republicans selected this former Rust Belt City as their kick off site thanks in large part because of the buzz Cleveland has been receiving in light of its mini downtown renaissance, which includes residential and office towers, new hotels and hot restaurant (think Mabel's a BBQ hipster joint that's garnering acclaim for its local fruitwood smoked meats) and the Zach Buell small plates hotspot called The Burnham, which just happens to be housed in the new Hilton. The two-level bar overlooking Lake Eerie makes it a perfect perch to rub shoulders with the politerati.

Foodies probably already know that Cleveland is home base for James Beard Award winner Michael Symon, host of The Chew. Symon also makes what has been named the best burger in America at his casual B Spot, prized for its burgers, brats and beer.

No doubt many of the attendees of the convention will check out the nearby West Side Market, a community-owned farmer's venue since 1912 where you can buy freshly baked muffins, infused olive oil and fresh produce from local family-run farms. Also, a short walk away is East Fourth Street, Cleveland's buzziest after dark corridor. Restaurants, bars, comedy clubs, street performers and, yes, The House of Blues, draw a crowd. The Rock And Roll Hall of Fame Museum, which isn't far, has traditionally been Cleveland's biggest summer attraction. This year its hallowed halls honoring superstars like the Rolling Stones, Crosby Stills & Nash and Prince who have shaped American culture may have to share the limelight with the convention center where the less harmonious sound of democracy will be on display.