It's hard to get 17 people -- especially 17 people with egos big enough to think they should be president of the United States -- to come together on too many things. Even though they share much in terms of political beliefs, the 17 members of the GOP clown car can't all agree, for example, on exactly how high a wall we should build with Mexico, or if Donald Trump should oversee construction -- irrespective of whether he becomes our next president.

On one thing, however, unanimity reigns. Every last blessed one of them has sworn to repeal Obamacare. And they won't go back on it.

My response? Bring it on. Support for Obamacare has been rising as the percentage of Americans who lack insurance has been falling.

Given that some chunk of those who don't like the law would prefer something more progressive, such as single-payer, and/or disapprove because it lacks a public option, there is certainly at least something approaching a majority who want to keep the law. Furthermore, the evidence indicates that more Americans want to keep it than want it repealed. 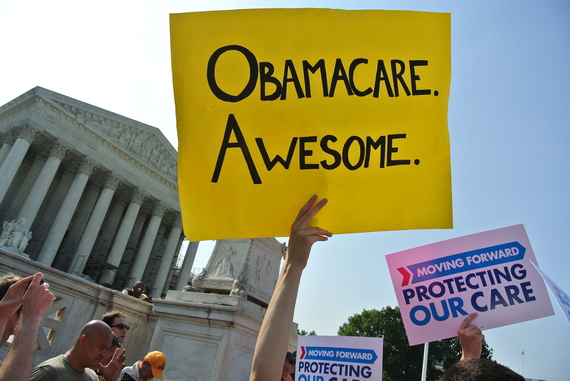 What Republicans say is that they want to repeal and replace Obamacare. They can't simply get rid of it and go back to the way things were. Some are more specific than others. Trump, for one, says that he'll replace it with "something terrific," and added that he'd "work out some sort of a really smart deal with hospitals across the country." I'm not kidding here, folks. These are actual quotations.

When pressed by Dan Diamond of Forbes, a spokesman explained that Trump will have a plan soon, and that it will "return authority to the states and operate under free market principles. Mr. Trump's plan will provide choice to the buyer, provide individual tax relief for health insurance and keep plans portable and affordable. The plan will break the health insurance company monopolies and allow individuals to buy across state lines."

In other words, word salad plus the old conservative chestnut about crossing state lines. This is an important matter because, in addition to Trump, just about every Republican believes it will be some kind of magic bullet.

Diamond examined that claim by looking to, you know, actual experts. A study out of Georgetown's Center on Health Insurance Reforms stated that a federal law allowing policies to be sold across state lines ...

... has the potential to preempt many more state consumer protections, lead to a regulatory 'race to the bottom,' and reduce access to coverage for people with pre-existing conditions. It poses these risks while failing to address market barriers identified by respondents--such as the cost of building a network of local providers and the cost of delivering care in different states and regions.

Or, as Katherine Hempstead, director of the coverage team at the Robert Wood Johnson Foundation, put it: "Imagine if you could follow any state's gun-control regulations."

We'll see what else Trump comes up with, but let's look at what we've got from Marco Rubio and Scott Walker. Rubio published an op-ed creatively titled "My Plan to Fix Health Care"--crack writing staff he's got there -- that contains several elements but not much in the way of specifics.

He'd offer a refundable tax credit to help with the purchase of a policy, he'd create risk-pools for those with pre-existing conditions (since they won't be guaranteed actual health insurance policies, like under Obamacare), he'd expand Health Savings Accounts (great for people who can't make ends meet in the first place, right?), he'd transform Medicaid into a block grant program, and he'd get rid of Medicare for "future generations" (it's great how current senior citizens, the majority of whom do vote Republican, won't be affected), replacing it with premium supports, i.e., vouchers. Oh, and he'd let companies sell policies across state lines, which we've debunked above.

As for Walker, to his credit his plan contains more specifics than Rubio's, and it leaves Medicare alone. Congratulations. On the negative side, it also would turn Medicaid into block grants (although neither Rubio nor Walker gave numbers, this proposal always results in a significant cut in Medicaid funds, as seen in the $732 billion in Medicaid "savings" contained in this year's GOP Senate budget plan), and relies on age-based premium supports for those who don't get coverage at work, that don't take income into account whatsoever. I'll bet the Walmart heirs will look forward to their couple of thousand bucks in health insurance vouchers.

There's also a real bait and switch. Walker's plan states that it will "protect all Americans with pre-existing conditions." However, that's what healthcare experts call poppycock. Sarah Kliff has read the fine print, and found Walker only protects those who maintain coverage continuously. If you've got a cancer diagnosis followed by a pink slip that results in losing your health insurance? Don't call Scott Walker. For reference, 89 million Americans suffered a coverage gap of at least a month between 2004 and 2007. Scotty probably thinks they were all public school teachers.

Health care expert Tim Jost looked at Walker's plan, and concluded that the "tax credits at the level proposed would not begin to cover the cost of decent coverage." It cancels the hugely progressive revenue-raisers and income-based premium subsidies in Obamacare, and hands out lots of checks to people who don't need them, just like Rubio's plan. One other small detail: Walker offers no way to pay for those vouchers (hint: Medicaid savings, anyone?).

The Walker plan contains some other bits and pieces, some that echo Rubio's (health savings accounts, refundable tax credits), others that Rubio left out (tort reform), but ultimately, as Joan McCarter concluded, Walker's plan is "a jumble of half-measures that don't add up to any kind of system."

From the right, his fellow presidential aspirant (barely) Bobby Jindal called Walker's plan "Obamacare lite" and lamented that Walker's plan left him shaking his head and wondering: "When did conservatism die?" Hyperbole? Perhaps. But at least now you've been reminded that Bobby Jindal is still running.

He put out an Obamacare replacement plan as well, but it's even worse than Walker's and Rubio's. Plus, Jindal's not making it off the kiddie stage anyway.

There's another thing (just one other thing?) Scott Walker has said about Obamacare that calls for greater scrutiny. We know that the states that failed to expand Medicaid have lagged behind the rest in terms of the percentage of people who remain without health insurance. Scott Walker's Wisconsin is one of the 20 states that have thus far rejected Medicaid expansion. And why? Here's Scotty:

We haven't exposed our taxpayers to something I think eventually is going to happen and that we've started to see in other states," he said. "And that is the promises they talk about under the Affordable Care Act, under Obamacare, not coming through. ... We believe confidently going forward this federal government is likely to renege from its promises on Medicaid to the states. And we won't be exposed to that. So they can talk about hypotheticals. We believe in the end the track record of the federal government has been to pull away from their commitments to the states.

Forget the fact that accepting Medicaid would have saved Wisconsin half a billion dollars over three and a half years, while providing coverage to 87,000 Wisconsinites. Forget that that's twice as much as Walker just cut from the University of Wisconsin's budget.

Forget all that, for a second at least. Scott Walker is running to lead the federal government. If he wins, he'll almost certainly have Republican majorities in the House and Senate. Let's ask him if he'd renege on the federal government's promise to pick up at least 90 percent of the cost of Medicaid expansion. Reneging on that promise would require a law, one passed by Congress and signed by a President Walker.

So, would he or wouldn't he? Given what Walker has said, I think the voters have the right to know if he'd become the reneger-in-chief. A repeal of Obamacare would certainly leave the states that expanded Medicaid on the hook, so I think we've got the answer. Still, I'd like to see the media pose that question directly.

In the end, a President Walker or Rubio or Bush or, ahem, Trump would have no choice but to repeal Obamacare. They would have no choice because their base would eat them alive if they failed to do so. The Tea Party folks are livid already because a Republican Congress still hasn't sent a repeal bill to President Obama's desk, and because Ted Cruz's lonely attempt to defund Obamacare two years ago met with an utter lack of support from his fellow Republicans in Congress.

As Hillary Clinton said this week, a Republican president would have to repeal Obamacare: "They're in too deep. They're too committed to it. They've said it too many times."

As for the Democrats, Bernie Sanders has come out for Medicare for all. Secretary Clinton released an ad in late June in which she declared: "We've got to defend the Affordable Care Act." If Joe Biden got in the race, he'd without doubt say the same. Any 2016 Democratic nominee would veto Obamacare repeal.

This is an issue that Republicans won't be able to avoid come general election time. And it's an issue Democrats must make sure voters remember as well. A vote for a Republican is a vote to repeal health care reform, to go back to people being denied coverage for having pre-existing conditions, to reverse significant advances aimed at improving women's health care specifically, and, to top it all off, to take health insurance away from 19 million people.

Repealing Obamacare would do all this damage and more, while making our federal deficits at least $137 billion worse over the next 10 years to boot, according to the Congressional Budget Office. When Republicans promise to repeal Obamacare, it's our side's job to make sure our fellow Americans know exactly what that would mean.