Today on social media, the greatest dispenser of seeming truth since Lucifer tempted Eve, arose a meme that, in paraphrase, reasons thus: Senator Ted Cruz of Texas, in his artful speech on freedom before the Quicken Loans Arena faithful Wednesday night in Cleveland, delivered a "courageous," principled and much-needed rebuke of the GOP nominee for President, Donald J. Trump. 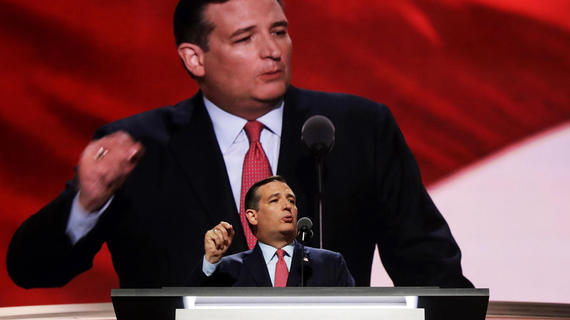 The argument behind the shibboleth goes like this. First, Mr. Trump deserved this payback when he insulted the looks of Mr. Cruz's wife Heidi during the GOP primary and subsequently accused Cruz's Cuban father, Rafael Cruz, of a tangential association to the JFK assassination. In both cases, Trump largely re-tweeted tweets that made these egregious points. Is the injury any less injurious because it was not directly delivered? I leave that to Mr. Cruz's conclave of dwindling backers to ascertain.

But statements by a former political consultant to Mr. Cruz, Amanda Carpenter, last night on CNN suggested that Cruz' major beef was not with Trump's numerous ad hominems, but, rather, that Cruz felt in his heart of preachy hearts that Trump was not a "true conservative." Read this way, Cruz's persuasive elucidation of conservative principles of freedom on taxes, regulations, and myriad other areas he thought best left to states or individual conscience was a protest against the ideological premise of Mr. Trump's candidacy and the convention convened to nominate the New York real estate tycoon as the party's standard-bearer.

Except for one small problem: compared to the binary anti-conservative choice of Democrat Hillary Rodham Clinton, Donald J. Trump - who has adopted almost every conservative principle and policy position that Cruz spoke of so eloquently Wednesday night - is almost to the right of the late Supreme Court Justice Antonin Scalia. As former Speaker of the House, Newt Gingrich, said to wild applause on the Quicken Loans stage after Cruz's surreal act of political suicide, "So to paraphrase Ted Cruz, if you want to protect the Constitution this fall, there's only one possible way and that's to vote the Trump-Pence ticket." 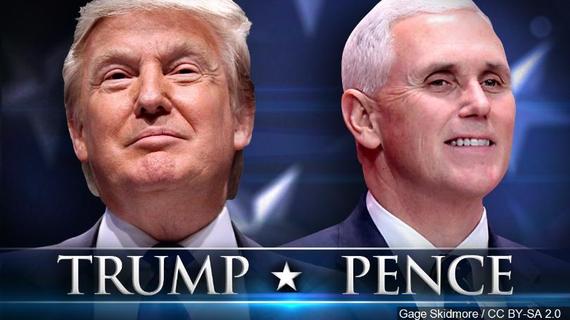 This is not a new blind spot for Mr. Cruz. Long detested in Congress for his sanctimonious rhetoric and indomitable unwillingness to compromise on his "principles," he has often failed to embrace an ally when he has one. The holier-than-thou Cruz thus personifies that time-honored DC mantra: "Don't Make the Perfect the Enemy of the Good."

Mind you, Mr. Trump is hardly the Platonic form of Republican goodness. His boorish rhetoric, incurious mindset, and gross ignorance of policy specifics, let alone the Constitution, is a genuine cause for concern for which I have castigated Mr. Trump in the past.

However, these indecorous aspects of Mr. Trump were not breaking news to Mr. Cruz, who frequently lobbed ad hominems at the GOP nominee during the primary campaign that trumped those of Trump himself. Cruz directly called Trump a "pathological liar," a "narcissist at a level I don't think this country's ever seen," "a serial philanderer," a "sniveling coward," and "utterly amoral." Those are mostly diagnosticl portrayals that Mr. Cruz, a lawyer by training, should have left to professional counselors to ascertain. Yet, on balance, they are no less egregious than the ad hominems that Trump directly or indirectly hurled at the man he deemed "Lyin' Ted."

Moreover, as lowbrow and unfitting as these statements were, they were by no means the worst epithets ever uttered in a U.S. primary campaign. A quick step back in history shows that the rhetoric deployed in countless previous elections was far more base than anything hurled by Cruz or Trump.

Yet, in almost all cases of intense primary strife, the losing candidate found a way to rise above the personal fray, and, like far-seeing adults have done for millennia, speak to a more elevated purpose. Sausage-making, as the expression goes, is ugly business. And political sausage-making is uglier still. It is indeed the great irony of republican governance that out of ugly, messy, and vicious campaigns arises noble leadership. Mr. Cruz, not only a student of political history but a champion debater (albeit in a less rigorous form than the gold standard of policy debate) should know this better than most.

The proper, moral, and adult thing to do, whenever a campaign's second place finisher is asked to speak at the winner's convention, is to bring the party together in unity. This is what happened in almost every single American campaign in history. It is best exemplified by Cruz icon, Ronald Reagan, in his 1976 speech endorsing GOP primary winner Gerald Ford. 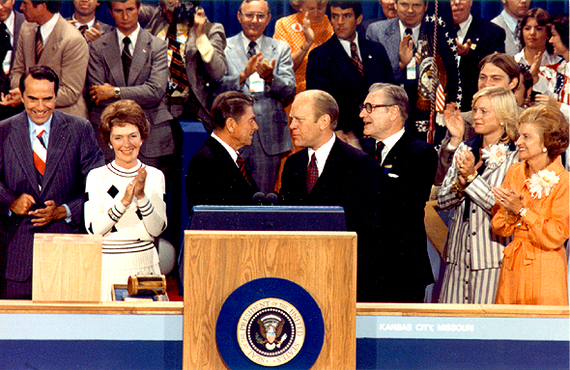 Had he followed Reagan's script, Mr. Cruz would still be seen as an "outsider," and true to his "conscience," but with the side benefit of being the leading GOP contender come 2020 or 2024. It's now unclear whether Cruz, after being publicly dressed down by his own Texas state delegation on Thursday morning, will even be reelected.

Yet knowing these risks, Mr. Cruz - showing a vindictive, infantile pettiness unbecoming of his age and political stature - decided to rhetorically rain on the victor's parade. I chalk this stunt up to a fundamental flaw in the fundamentalist firmament of Ted Cruz, who shortly after delivering his pompous non-endorsement, showed his true character by running for succor and approval to billionaire campaign contributor, Sheldon Adelson. In a surprising act of Kantian virtue likely to endear the Las Vegas casino tycoon to Trumpian hearts, Adelson summarily denied the disgraced Cruz entrance to his convention suite.

Suddenly friendless in a hall filled with former friends (many of whom joined with the New York Republican delegation in vociferously booing this wannabe Marc Antony off the Quicken Loans Arena stage), Mr. Cruz no doubt sought out his chief defender, the aggrieved and formerly sympathetic Mrs. Cruz. However, Heidi Cruz - now seen as an accomplice in this act of hideous treason - was being escorted out of Quicken Loans to a chorus of "Goldman Sachs! Goldman Sachs!" Heidi Cruz is an employee of the investment banking concern.

It was a Bernie-Sanders-like admonition that reveals the cross-party populist appeal of Mr. Trump. An appeal, seen now in jealous retrospect, that must have grated on the self-enamored Mr. Cruz, a child of a first-generation Cuban-American preacher man, who obviously instilled in his son a love of country, but failed miserably in imparting a sense of place, decorum, and good sportsmanship.

There are some who unwisely think that Cruz's small-minded performance will endear him to Republican hearts come 2020, should Mr. Trump fail at the ballot box come November. Such calculation was no doubt an unspoken undercurrent to Mr. Cruz's unbridled hubris.

If so, then Ted Cruz, who is by upbringing as much Canadian and Cuban as he is American, fails, like Mr. Obama (who spent large swaths of his childhood off the U.S. mainland) before him, in grasping time-honored values that longstanding Americans of all stripes hold dear. First, be a man of your word. Last night, before millions of Americans, Cruz broke his campaign pledge to support the GOP nominee. Secondly, if graciously asked to speak at a convention, then publicly back the nominee, however briefly, despite one's differences. Third, loyalty is a virtue greater than all others, especially among rivals seeking the greater good.

Ted Cruz violated these tenets. His behavior, in running right to the money, right after his speech, shows that he, not the largely self-financed Mr. Trump, is the true imposter to conservatism. In fact, Mr. Cruz just validated Mr. Trump's conservative outsider bona fides.

Many pundits - most of them Democrats and thus fans of Hillary-style hyper-controlling message management - admonished Trump for the Cruz debacle. Having known what the Junior Senator was to say two hours before, Mr. Trump, argue the micro-meddlers, should not have let Mr. Cruz speak at all or should have demanded a quid pro quo endorsement in exchange for Cruz's prime-time speaking slot. While a good argument can be made that Trump is at times slipshod in his governance, in this case he did the right and conservative thing.

As Mr. Cruz intoned on the Quicken Loans stage, conservatism is about freedom from excessive intrusions into one's rights, including the right to free speech. Moreover, as Mr. Cruz artfully noted, conservatism is about ascertaining the good on one's own, in accord with eternal principles, free of government edicts and nanny-state regulations. We should aim, if Mr. Cruz is to be believed, to become proud, strong, self-created individuals, living in diverse states that govern in accordance with the needs and values of their respective localities, but always pointing, despite these differences, to the greater good.

By giving Mr. Cruz the opportunity to discover, through his own free will, the right and proper thing to do in this place, on this occasion, Mr. Trump delivered the most conservative act of this election.