CLARKSTOWN, N.Y. -- Just off Exit 14 on the New York State Thruway, in the middle of a tandem truck lot bounded by the box stores of Spring Valley Marketplace -- Bed, Bath & Beyond, T.J. Maxx, Target -- deep science is being deployed, quite literally, in an effort to combat climate change.

Here, amid the densely packed suburban sprawl of greater New York City, three miles shy of New Jersey's northern border, a towering drill rig is plumbing deep into the bedrock at a rate of about 25 feet per hour. It is now at roughly 3,000 feet, though the goal is to get it more than 1.5 miles down.

Core samples will be taken to determine "the porosity and permeability" of the rock, explained Paul E. Olsen, a geoscientist with Columbia University's Lamont-Doherty Earth Observatory and an adviser to the $11 million undertaking -- one of 10 such projects being funded in large part by the American Recovery and Reinvestment Act of 2009.

The goal: determining whether these deep rock formations can be used to permanently store that nettlesome byproduct of energy production and other industrial pursuits -- carbon dioxide -- rather than dumping it into the atmosphere and exacerbating global warming.

"I look forward to seeing how we can progress with this important issue," said New York State Sen. David Carlucci, a Democrat and one of a smattering of community leaders and project partners huddled under a small white canopy amid festive balloons, a constant drizzle of rain and the roar of the industrial drill.

The project's "open house," hosted by TriCarb, a partnership between Houston-based Sandia Technologies and Conrad Geoscience Corp. of Poughkeepsie, N.Y., took place just a few hours before Wednesday evening's Republican debate, broadcasted clear across the continent from Simi Valley, Calif., and where the topic of global warming -- and by extension, science itself -- received a brief but telling work-out.

"The idea that we would put Americans' economy at jeopardy based on a scientific theory that's not settled yet to me is nonsense," said Texas Gov. Rick Perry and the current Republican frontrunner, when asked which scientists he looked to for guidance on global warming.

"Just because you have a group of scientists that have stood up and said, "Here is the fact" -- Galileo got outvoted for a spell," Perry continued. "But the fact is, to put America's economic future in jeopardy, asking us to cut back in areas that would have monstrous economic impact on this country is not good economics and I will suggest to you is not necessarily good science. Find out what the science truly is before you start putting the American economy in jeopardy."

Of course, as Adam Estes pointed out at The Atlantic Wire blog, Galileo was persecuted by wrongheaded and denialist religious authorities, not the scientific community, as a heretic for suggesting that the Earth revolves around the sun.

Perhaps not the zinger that Perry intended, but his words drew approving applause nonetheless.

When pressed by Politico editor John F. Harris for details on the specific theories from which the Texas governor derived his views on climate, Perry dodged the question, instead citing his state's efforts to reduce other air pollutants. He then stated that "the fact of the matter is the science is not settled on whether or not the climate change is being impacted by man to the point where we're going to put America's economics in jeopardy."

Michelle Bachmann, the Republican congresswoman from Minnesota who has famously called for oil drilling in the Everglades, chimed in on the issue herself, issuing a muddled conflation of clean-air regulations pursued by the Environmental Protection Agency -- and recently curtailed by President Obama -- with climate science.

"What we're seeing is that a political agenda is being advanced," Bachmann opined, "instead of a scientific agenda, and this is leading to massive numbers of jobs being lost."

These are not new views. Perry told a gathering of local business owners in New Hampshire last month that scientists have manipulated data in an effort to spur funding, and that overall, they remain divided over the issue of climate change. "I think we're seeing almost weekly, or even daily, scientists who are coming forward and questioning the original idea that man-made global warming is what is causing the climate to change," he said. 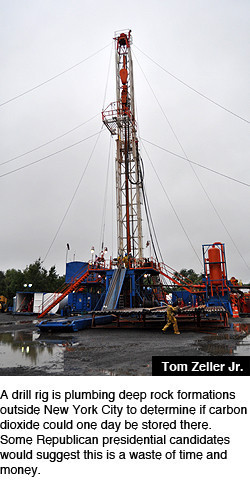 On the issue of funding solutions to the problem? "The cost to the country and to the world of implementing these anti-carbon programs is in the billions if not trillions of dollars at the end of the day," Perry said. "And I don't think from my perspective that I want America to be engaged in spending that much money on still a scientific theory that has not been proven and from my perspective is more and more being put into question."

These views also extend, to an increasing degree, to the American electorate, which has become woefully polarized on the issue of climate change. Perhaps not surprisingly, according to a survey published Wednesday by the Yale Project on Climate Change, this polarization is being driven in large part by the Tea Party, a constituency that may play a key role in getting any Republican into the White House.

The Yale survey found, for example, that while 62 percent of Democrats believe that global warming is caused mostly by human activities -- that is, by burning fossil fuels and injecting historically unprecedented amounts of carbon dioxide into the atmosphere -- most self-identified Tea Party members responded that global warming is either naturally caused (50 percent) or is not happening at all (21 percent).

In an uncanny echo of Perry's own words on Wednesday, the Yale study also found that while 55 percent of Democrats said they believed that the majority of climate scientists think global warming is happening, a larger percentage of Republicans (56 percent) and Tea Party members (69 percent) said disagreement prevailed among the scientific community on that point.

Tea Party members, according to the survey, were also far more likely than other respondents to describe themselves as “very well informed” about climate change, and to say that they "do not need any more information" on the topic.

Whether or not Perry and other Republicans actually believe what they are saying is an open question. Perry himself, who has also recently called into question the theory of evolution, was reportedly a supporter of climate change evangelist Al Gore before switching to the Republican party in 1989.

But the scientific equivocation on climate to which they allude is utter nonsense.

A study published last year in the Proceedings of the National Academy of Sciences, for example, reviewed the publication and citation data of 1,372 of the globe's busiest climate researchers. The findings? Virtually all -- between 97 and 98 percent -- of the scientists "most actively publishing in the ﬁeld" were found to support the basic notion of anthropogenic climate change -- that is, climate change spurred by humans.

The study also found that "the relative climate expertise and scientific prominence of the researchers unconvinced of [man-made climate change] are substantially below that of the convinced researchers."

That point was lost on Fox News last month when it attacked the children's show "SpongeBob SquarePants" for having the temerity to suggest that man-made global warming was a problem without noting that this was "actually a disputed fact."

The sobering implication in all this, of course, is that the success of Republican candidates like Bachmann or Perry in unseating President Obama -- who, while perhaps not as aggressive on the issue as some would like, has nonetheless asserted that "the science is beyond dispute and the facts are clear" -- could have profound implications not just for the United States, but for the future of the planet.

It would almost certainly spell the end of federal funding for any number of clean energy technologies, as well as efforts to curb our copious CO2 emissions, including the project underway here in Clarkstown.

After all, why spend money exploring the feasibility and safety of carbon storage if the science of global warming is in dispute?

Whether or not such foolishness will ultimately prove a winning strategy for GOP candidates is unclear, but not every Republican believes so.

"When you make comments that fly in the face of what 98 out of 100 climate scientists have said, when you call into question the science of evolution -- " said Jon Huntsman, the former Utah governor and ambassador to China, and the sole Republican on the stage Wednesday night to speak honestly about global warming. "All I'm saying is that in order for the Republican party to win, we can't run from science."