A number of Republicans may love Vladimir Putin, but a look at the country's economic freedom and political freedom show Russia has neither. So why has Putin been able to charm the GOP, even when he helps enable cronies in the Ukraine to shoot down a passenger jet?

No matter how often the right wing claims that Barack Obama has made America into a socialist dictatorship, the evidence from experts don't back that up. Ratings on America's economic freedom, provided by Economic Freedom of the World, have the U.S.A. in the top quartile of economic freedom for 2013, ranking 17th, and that's put together by a group of economic conservatives with little love for the Obama Administration.

Moreover, Freedom House, a pro-human rights group, has placed America as one of the freest countries of the world, earning top marks for its respect for civil liberties and political rights, though the group notes that the USA could still do better in some areas.

That's in stark contrast to Russia. The Economic Freedom of the World dataset shows Russia to near the bottom of the third quartile, ranking 101st in keeping the government out of the economy, one spot behind Haiti. Its economic report reads like a Dinesh D'Souza accusation of all the things Obama would do by 2016. 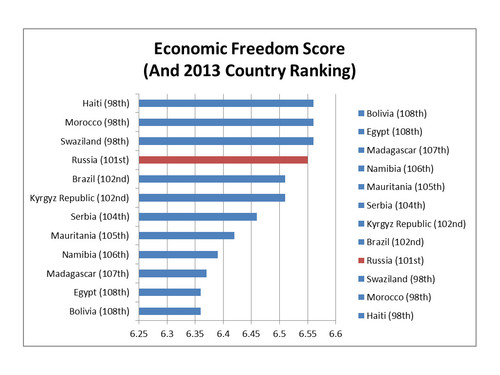 Data comes from the Economic Freedom of the World 2013 Report

Russia's Freedom House report is even more cringe-worthy. On a scale of 1 to 7, with the latter being the least free, Russia receives a 5.5, and overall ranking of the 25 percent of the "least free." Its report reads like a combination of the old Soviet Union, mixed with the dystopia seen in movie "The Purge," or its sequel.

Former Rep. Ron Paul, no stranger to conspiracy theories, opined that it was suspicious that the Malaysian jet changed course, implying that it was deliberate sent to be shot down. He called U.S. and E.U. sanctions on Russia "an act of war," and blamed both for starting the crisis by overthrowing the Ukrainian government, according to Courtney Coren's article "Ron Paul: Don't Blame Putin for Malaysian Jet Shoot Down," published by Newsmax.

Ex-Rep. Allen West, a Fox News contributor, wrote this on his blog, according to Salon Magazine's Sarah Gray, quoting the group "Media Matters."

"Sadly, hundreds of Ukrainians and 298 souls on MH17 have paid the price for the weakness and abject cowardice of Obama's 'flexibility.'...And here in America we quibble over a lawsuit against this charlatan."
"The blood on Vladimir Putin's hands was poured by Barack Obama who is indirectly responsible, accountable accountable [sic] and no different than Neville Chamberlain's weakness in the face of the 20th Century maniacal dictator Adolf Hitler."
And who can forget President George W. Bush looking into Putin's "soul" and seeing a good guy?

But it seems that the comments from Rep. Rohrbacher are the most illuminating as to why Putin could win a crowded GOP primary.

An article by James Kirchick in The Daily Beast reveals that the California Congressman likes Putin for being "a tough guy." He sees pro-democracy demonstrators as perpetrators of "street violence." And he praises Putin for being a religious leader and inspiring the country to worship God in the Orthodox Churches, despite evidence to the contrary.

The Kirchick article also points to Putin's attempts to squash the homosexual community as another admirable trait. And he's "standing up" to Obama, right?

Unfortunately, the "strong leader" they admire has presided over a country which provides little economic freedom, and has helped the country fall from moderate levels of freedom to dictatorship according to Freedom House, everything they accuse Obama of doing in America.