“We know that cops are under attack in the media, by grandstanding politicians and elected officials,” New York City Councilman Eric Ulrich (R-Queens) told a crowd outside Queens Borough Hall Tuesday.

“But the silent majority of New Yorkers are not protesting in the streets,” Ulrich said, referring to the massive protests that swept the city last month in the wake of a grand jury’s decision not to indict the white police officer who put Eric Garner, who is black, into a fatal chokehold.

Ulrich then lambasted de Blasio for meeting with protesters last month, and accused the mayor of “letting the professional police critics and editorial boards dictate the policies of how the police department is run.”

“That is not right,” he added, “and that is why we must stand here today and let the whole city know that the cops are the good guys, not the bad guys!”

The crowd, many waving American flags, erupted into cheers. 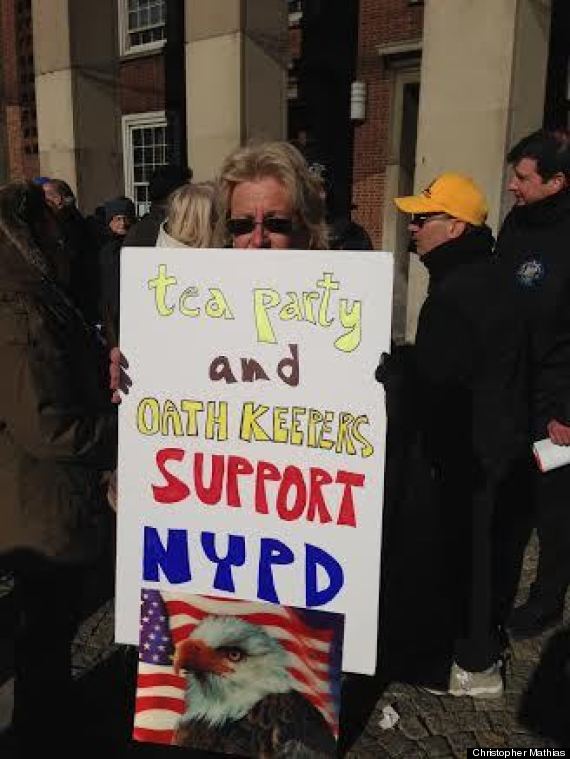 Michael Palladino, head of the Detective Endowment’s Association, was the only police union official to speak at Tuesday's rally. He also said that a “silent majority” of New Yorkers “supported the NYPD,” before adding that, in his 36 years with the police department, he’s “never witnessed such an attack on the men and women of the NYPD -- the hardworking men and women who risk their lives every day -- by elected officials of this city.”

The crowd started to jeer. “De Blasio’s got to go!” went one chant.

Police unions have been engaged in a prolonged and bitter political battle with Mayor de Blasio over the last month, particularly since two police officers -- Wenjian Liu and Rafael Ramos -- were shot execution-style in their patrol car while on duty in Brooklyn.

Ismaaiyl Brinsley, the man who killed the two officers, had posted to Instagram before the shooting that he was going to put “wings on pigs.” He added the hashtags #EricGarner and #MichaelBrown, both black men who died at the hands of police.

At the funerals for Liu and Ramos, many officers turned their backs on the mayor as he spoke. The mayor had previously expressed sympathy with the Eric Garner protesters, and said publicly that he’d told his biracial son to be cautious during interactions with the police. Some officers have expressed concern that these actions helped further increase public outrage toward the force.

Shortly after the killings, Patrolmen’s Benevolent Association President Pat Lynch said the mayor had “blood on his hands,” and rank-and-file police officers engaged in a two-week work slowdown in which they stopped making low-level arrests and issuing summonses.

“Mr. Mayor, it’s not too late,” said Jeffrey Wiesenfeld, who served as a top aide to former Republican New York Gov. George Pataki. “In fact, we’re stuck with you for three years. Apologize. Make it right.”

“You’re entitled to your world view, but you cannot impose your radical worldview on this city,” he continued. “Give us back the confidence of our police, their desire to operate with full vigor and knowledge that you will defend them. We expect to hear that from you, Bill de Blasio.”

Wiesenfeld and other speakers Tuesday also invoked the recent terror attack in Paris -- as well as the Sept. 11 attacks and the Boston Marathon bombings -- as reasons for why people need to unequivocally support the police.

There was also open vitriol directed at one of Mayor de Blasio’s closer political allies: the Rev. Al Sharpton. When organizer Concannon asked the crowd, “Who speaks for us?” many responded by yelling, “Not Al Sharpton!”

Concannon said Tuesday’s gathering marked the first of three “Support Your Local Police” rallies scheduled for this month. He suggested to the New York Observer that as many as 5,000 people could show up to the next event, scheduled for outside Brooklyn Borough Hall on Jan. 20. 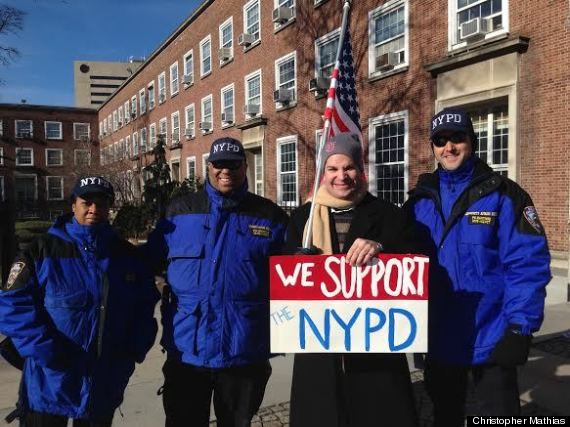 Republicans in New York appear to have seized on de Blasio's ongoing rift with the police, while it remains unclear how the mayor will make amends.

John McLaughlin, a Republican pollster, said the mayor’s struggles with the police could create “the possibility” of the mayor facing a tough Democratic primary challenge when he’s up for reelection in three years. McLaughlin said a good “first step” for the mayor would be to apologize.

“He hasn't found it yet, but he definitely needs a way to win back the confidence of the police,” McLaughlin said, adding that “if the mayor continues down the path where he doesn't want to apologize,” he’ll “definitely” face a tough primary.

But Democratic strategist Hank Sheinkopf said that “as long as crime stats remain low and people remain safe, then the unions’ battle has limited electoral use” for the Republicans. For the moment, crime stats have remained at historic lows under de Blasio’s administration, even during the police slowdown over the last few weeks.

Republicans in New York, Sheinkopf added, only benefit politically in times of crisis. Rudy Giuliani was elected mayor after the crime wave of the early 1990s. Michael Bloomberg was elected mayor after the Sept. 11 attacks. So far, Shinkopf said, the battle with the police unions isn’t a crisis. But, he added, if it is “not properly handled” by de Blasio, it could become one.

Mayor de Blasio’s office did not respond to a request for comment Tuesday. His office, however, did announce that it had raised over $200,000 to be donated to the families of slain NYPD officers Liu and Ramos.

The New York Daily News also reported Tuesday that a de Blasio spokesman -- perhaps in an olive branch to the police unions -- said the mayor would veto a bill that would make chokeholds illegal.

The spokesman, Phil Walzak, told the paper that the mayor thinks the current NYPD ban on chokeholds is sufficient. The bill would make chokeholds -- like the one that was used on Eric Garner-- a misdemeanor offense punishable by up to a year in prison or a $2,500 fine.

Ed Mullins, president of the Sergeants Benevolent Association, told the Daily News that de Blasio’s decision was “interesting” and was “a first step” in mending tensions between the mayor and police.