Being a pediatrician and a public health advocate, there were several things that bothered me about Wednesday night's "debate" about vaccines. Let's start with the first part of Jake Tapper's question: "Dr. Carson, Donald Trump has publicly and repeatedly linked vaccines, childhood vaccines, to autism, which, as you know, the medical community adamantly disputes." Mr. Tapper, there is no dispute. The medical community has repeatedly disproven any links between childhood vaccines and autism. We did our job. It's time to do yours as a journalist. The next part of your question to Dr. Carson, "Should Mr. Trump stop saying this?" is irrelevant: EVERYONE should stop saying vaccines and autism are linked.

To his credit, Dr. Ben Carson, a pediatric neurosurgeon, meandered his way to a decent comment: "But, you know, the fact of the matter is, we have extremely well-documented proof that there's no autism associated with vaccinations." Unfortunately, this single scientifically accurate statement was buried in the midst of nonsense and non-science.

Earlier in his response, Dr. Carson said: "Vaccines are very important. Certain ones. The ones that would prevent death or crippling. There are others, there are a multitude of vaccines which probably don't fit in that category, and there should be some discretion in those cases." I don't know what your definition of "multitude" is, but there are 12 childhood immunizations recommended by the US Centers for Disease Control and Prevention (working in conjunction with medical experts from the American Academy of Pediatrics, American Academy of Family Physicians, and the American College of Obstetricians and Gynecologists). Every single one of these vaccines fits the category of "preventing death or crippling" both in the United States and worldwide.

Take a second to look at the childhood immunization schedule: 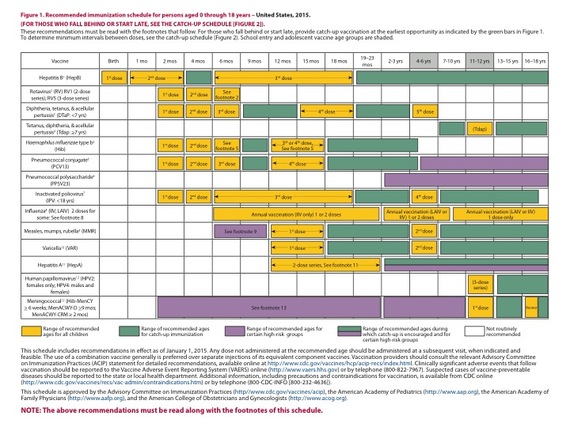 It may seem scary and complicated, but I assure you that document is nowhere near as scary as struggling to breathe because of whooping cough or diphtheria; losing your vision and/or hearing to meningitis; or suffering brain damage from measles. As for why there are so many doses, it helps to think of human immunity like the saying about Rome: it's not built in a day. Our children's immune systems are incredible at protecting them, fighting 2,000 to 6,000 germs on any given day, so doing combination vaccines or multiple injections at one visit will not "overwhelm the system." The dangers of certain diseases are really not worth the personal risk nor community risk of going un-immunized. The safety of providing multiple vaccines has been proven by the scientific community, and the current vaccine schedule is effective at protecting public health. Prevention through immunization has saved millions of lives, and our country is healthier for it.

By the way, something like that last paragraph is what we should have heard from the two doctors running to be the Republican candidate for President. Instead, we heard Dr. Carson criticize the government for protecting the public's health. Then, in a "second opinion," we heard Dr. Rand Paul, an ophthalmologist, say "I'm all for vaccines. But I'm also for freedom." What makes that "but" so frustrating is that vaccines and freedom are not opposed to each other. In 2000, fifteen years before the recent Disneyland measles outbreak, America was free from measles because of vaccines. Vaccines freed us from smallpox. Vaccines freed us from polio. Everyday Americans and their government worked together to make childhood vaccination a common routine, and our public health triumphed over these diseases. That freedom is real, not rhetoric.

Dr. Paul then described how he's "a little concerned about how [vaccinations are] bunched up. My kids had all of their vaccines, and even if the science doesn't say bunching them up is a problem, I ought to have the right to spread out my vaccines out a little bit at the very least." Plenty of pediatricians, including myself, honor their patients' parents choice to spread out vaccines. However, when I counsel a family about that choice, I make it very clear that abundant scientific research shows it is safe to provide multiple vaccines at one visit (as I described above). Also, the public health benefits are worth it because our herd immunity, the collective health that binds us, is strengthened when everyone does their part to get timely immunizations. After hearing all of this, if parents still opt to spread out their child's vaccines, I honor the request and maintain a caring professional relationship.

Rather than engage in informative, fact-based, positive dialogue about vaccines, Dr. Carson and Dr. Paul did a disservice to science and research. The purpose of public health endeavors and medical studies is to guide us away from fantasies, stereotypes, and fears through the use of scientific inquiry and careful review of real world data. The development of vaccines, the research about their safety, and their proven track record all merit praise. Sadly, Dr. Carson and Dr. Paul pandered to anti-vaxxers by feeding their contempt for science and validating their unfounded cynicism. Americans already have their fear-mongering, loudmouth entertainer in Donald Trump. We deserve to hear medical science explained with clarity -- especially from health professionals seeking the highest office.