Polls correctly forecast a Republican Senate majority, but missed their margins nationwide by a mile. And exit polls show Americans remain thoroughly disaffected and pessimistic about the economy. This is HuffPollster for Wednesday, November 5, 2014.

Beyond the big story of the 2014 elections -- a wave of Republican victories that swept across contests for the U.S. Senate, U.S. House and Governor nationwide -- pollsters face some difficult questions: Public polls consistently understated Republican candidates in almost every contested statewide race, including an usually high number of remarkably large polling misses.

Yes, the much-discussed, much-debated poll-based forecasts of the U.S. Senate correctly predicted Republicans taking control of the Senate, but the correct final "call" also masked the consistent GOP undercount in individual polls, and Republicans are likely to net a seat or two more than predicted. Most forecasts, including HuffPost Pollster, predicted Republicans winning a 52 or 53-seat majority, but the most likely outcome at this hour is a 54-seat GOP majority, (assuming the current vote count leaders hold on in Alaska and Virginia Senate races, and barring an unlikely upset by Democrat Mary Landrieu in the December 6 runoff election in Louisiana)

But the polling averages that powered those forecasts demonstrated a mostly-consistent understatement of Republican margins that averaged roughly 5 percentage points in the most closely contested Senate races. Among battleground races, Democrats are only running ahead of the polling averages in two states: New Hampshire and, ironically, in Alaska. Although the Alaska result remains tenuous (the Associated Press has not yet called, as of this writing, due to an estimated 25,000 or more uncounted absentee ballots), polls in many recent elections overstated Democratic performance. 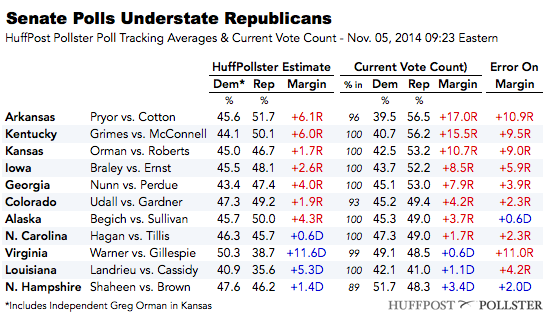 If the average error of 4 to 5 percentage points holds it will be the worst collective Senate polling miss since 1998, no mean feat given that number of polls incorporated into the average, and the number conducted in the final days of the campaign, have grown exponentially over the past 16 years.

And the problem also extended to contests for governor, where polling averages understated Republican margins in all but two races in the Northeast (Connecticut and Massachusetts) and again, as of this writing, Alaska. Here, the errors resulted in more races where a candidate with a very narrow lead in the polling model ended up losing. 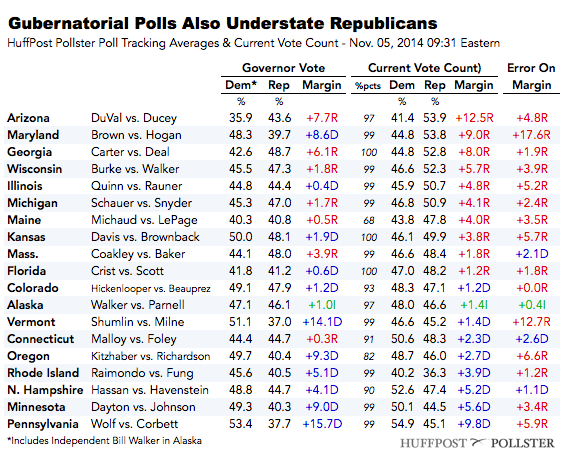 In Maryland, Republican Larry Hogan's stunning upset victory represented a more than 17 percent understatement of his support in the HuffPollster average (which was calibrated to non-partisan polls -- polls sponsored by the Republicans late in the campaign showed a closer race, and a final Hogan internal poll had him ahead by 5).

To put those numbers into context, consider this: In backtesting the HuffPollster model against the last two Senate mid-term elections, the biggest error by far was a roughly 6 percentage point understatement of Hary Reid's margin in 2006. That's only a point or two worse than the average error in the Senate races this year.

Or consider that in the most prominent polling miscue in recent memory, the 2008 New Hampshire Democratic presidential primary, polls missed Hillary Clinton's margin over Barack Obama by 8 or 9 percentage points. That error was smaller than the misses in Arkansas, Kentucky, Virginia and Maryland this year, a remarkable feat given that primary election polls are typically more prone to error than those in those in general election contests for Senate and governor.

While votes are still being counted and more comprehensive assessments will come with time, it is likely that the understatement of Republican margins has multiple explanations. As HuffPollster noted on Tuesday, Republican Senate candidates gained consistently. From Labor Day to Election Day, Republicans increased their margins in every state but Kansas (and even there the September surge by independent Greg Orman faded a bit during October). In almost every case, the Republican candidates gained more than the Democrats as the undecided vote fell, generally supporting the theory that low approval rating of President Obama would cap support for Democratic candidates and that late deciding voters would break to the Republicans, as they did to Democrats in 2006. 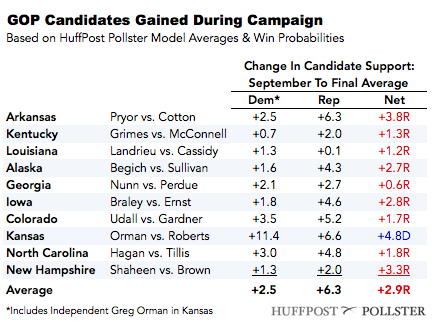 But the degree to which polling understated Republicans' lead belies the notion that it can be explained entirely by a late shifts among undecided or uncertain voters. Polls also likely missed the true composition of the electorate, probably including too many Democratic-leaning voters who chose to stay home.

For that reason, it is unfortunate that one reflexive reaction among some election observers was to dismiss as a "loser" the notion of "modeling the electorate" based on voter history drawn from official lists of registered voters.

Yes, turnout models that had succeeded in recent elections appeared to have a rocky night in 2014. But those same methodologies also offer the best source of data to explain what went wrong and chart a course to more accurate approaches in the future. Polls that drew samples from voter files and matched respondents to their public records are in a position to determine which ones actually voted and which did not. They can also assess whether the voters they were unable to reach, for whatever reason, contributed to the understatement.

We have much time to study the 2014 polls and reflect on the lessons learned. For now, however, what we know for certain that that of all the possible scenarios, the most favorable for the GOP played out in virtually every state.

WHAT WE LEARNED FROM THE EXIT POLLS

Economic pessimism still resonates - Gary Langer: "A fresh blast of public discontent reshaped American politics yet again in the 2014 midterm elections, handing the Republican Party control of the Senate and its largest house majority in 86 years. Its source: Seemingly unending economic woe – and the political discord it fuels. Seven long years after the economy tanked, 70 percent of voters Tuesday said it’s still in bad shape. Seventy-eight percent said they’re worried about its direction in the year ahead. Only three in 10 said their own economic situation has improved in the last two years. And nearly half of voters said they expect life for the next generation of Americans to be worse – by far the most to say so in exit polls asking the question back to 1996." [ABC]

Democrats' base voters went missing, while independents trended right - Langer: "The fact that Democratic voters are not particularly reliable midterm voters was borne out in other results. Young adults, a Democratic mainstay, accounted for just 13 percent of voters this year, down from 19 percent in 2012. Those who did participate, moreover, supported Democrats only by 54-43 percent, down from a 60-38 percent margin in their House vote two years ago….Single women, another core Democratic group, gave the party their smallest margin, 60-38 percent, in exit polls back to 1992...Key Republican groups came out swinging. Eighty-five percent of conservatives voted Republican...And independents, back to their swing-voter status in this election, voted Republican by a 12-point margin."

Dems' support for popular issues didn't help them - Across the nation's battleground states, Democrats' legislative priorities significantly outpolled their candidates. Nationally, 57 percent of Americans favored a path to citizenship for undocumented immigrants, 53 broadly supported legal abortion, and 58 percent said climate change was a serious problem. But none of those were deal-breakers. 34 percent in support of immigration reform, 33 percent of those pro-abortion rights, and 29 percent of those worried about the environment still voted Republican, and despite Democrats' emphasis on income inequality, a third of voters who said the economy favors the wealthy voted GOP.

On the state level, 57 percent in Georgia supported raising the minimum wage, as did 59 percent in Iowa, 64 percent in North Carolina and Wisconsin and 66 percent in Louisiana, all of which look on track to elect Republicans. In Kentucky, where Sen. Mitch McConnell easily won reelection, 50 percent said the state health exchange Kynect was working well, while just 37 percent thought it was working poorly.

The disconnect was especially visible in Colorado, where Sen. Mark Udall staked much of his reelection battle on casting his opponent, Republican Cory Gardner, as out of sync with voters on issues like abortion. He was right -- 61 percent in the state said abortion should be legal, and 64 percent opposed a controversial amendment granting personhood to fetuses, according to exit polls. But many didn't see the issues as pressing enough to switch their vote: A third who voted no on the amendment still voted for Gardner, as did 16 percent of the people who said abortion should be legal in all cases and 42 percent of those who said it should be legal in most cases.

Voters' feelings on the president and the state of the nation were more predictive. Three quarters who said the country was on the wrong track voted for Gardner, as did 77 percent of those who felt negatively about the Obama administration and 82 percent who said Obamacare went too far.

Little excitement about 2016 candidates - NBC: "Just 43% of midterm voters said Clinton would make a good president. She can take solace in the fact that this percentage is higher than for any of four potential 2016 Republican candidates also asked about in the NBC News national exit poll. Among those GOP possibilities, former Florida Gov. Jeb Bush did slightly better than others, with 29% of voters saying he would make a good president. Bush is followed by Kentucky Sen. Rand Paul at 26%, New Jersey Gov. Chris Christie at 24% and Texas Gov. Rick Perry at 24%." [NBC]

Candidates weren't too popular in their home states, either. Just 34 percent in Kentucky thought Rand Paul would make a good president, and just 34 percent in Texas said the same of either Rick Perry or Ted Cruz. In Florida, 36 percent gave a thumbs up to Marco Rubio, and 40 percent to Jeb Bush. In Wisconsin, the candidates were a little more popular but still lacked majority support, with 42 percent saying Scott Walker would be good in the executive office, and 46 percent that Paul Ryan would.

-Is everything you've heard about inaccurate poll data wrong? [IBT]

-Fox News didn't get the memo about not reporting early exit returns. [Vox]