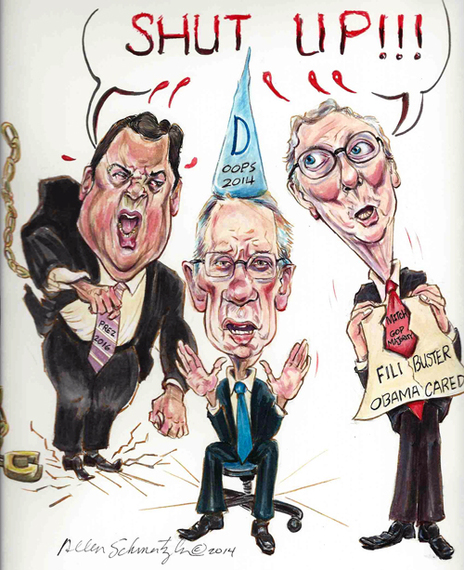 I live in Oregon and we just legalized recreational use of marijuana. I may need to smoke some, but for medicinal reasons, to create a new mental space to make sense out of how the country voted Tuesday. Welcome to our society of colossal contradictions, frustration, despair and anxiety. It is difficult to reconcile how this same country sent history on its heels by putting the first person of color in the White House in 2008 with a massive blue mandate for optimistic change. And here we are today one impeachment away from a total dismantling of President Obama.

With a miserable 60 percent disapproval rating Republicans had a marvelous victory sweep across the fading star spangled banner. Seriously, Americans elected a party that ran on empty. They now control most of the country's political real estate. With both Houses of Congress, a big majority of the 50 governors' mansions, and a majority on the Supreme Court, the American flag has turned decidedly red. What is left as blue may need to fly some surrender white and hope Hillary Clinton is a white knight riding to a 2016 rescue. But maybe not, considering the candidates she campaigned for took a beating as well.

The Cons of our Republic, the RepubliCons finally fulfilled their promise. Their shifty billionaire backers invested wisely. It was the day after Barack Obama was elected president in 2008 that Senate Minority Leader Mitch McConnell of Kentucky dedicated his energies to rally fellow Cons to do everything in their power to ensure Obama did not succeed. Six years and several election cycles later, their ground game con of obstructing, denying, misrepresenting, ignoring facts, and fine-tuning the negative blame-Obama-for-everything has paid off. RepubliCons are now unchained and in command. Mitch McConnell is the Senate Majority Boss. Harry Reid and Democrats have been vanquished from every leadership seat in the Senate and without shame but way too ironic, a climate change denier gets to lead the Senate Committee on the Environment and the party that keeps claiming they are not scientists will get to lead the Senate Committee on Science. This is going to be fascinating but I fear there will be lots of material for the late night comics.

To get a preview of how all this is likely to play out, look at how New Jersey Governor Chris Christie is again behaving as he too is surging. He has been all over the country at campaign stops championing fellow RepubliCons fattening up his 2016 "you owe me's." Somewhat liberated from his "Bridgegate" scandal and skinned of his phony Mr. Nice Guy skin, Christie "The Raging Bull" can't wait to tell any contrary to shut up! If Americans are truly hungry again for a president with a strong combative swagger, who is over-confident, arrogant, apparently not too reflective, and with severe dysfunctional impulse issues Mr. Christie looms large.

Fascinating questions remain. What will RepubliCons unchained do? Will they balance advancing their aggressive conservative far right agenda with accepting responsibility for governing and represent a more center slice of America? With Democrats diminished and Obama hobbled how will Hillary Clinton play the presidential sweepstakes of 2016? Do we watch for legislation that appears meaningful? But hidden in the folds of the voluminous pages will be slick riders aimed to tear down Obama's legacy and push him to pull out a tool he has basically not used, the veto pen? As he vetoes measures, will Democrats be labeled obstructionists with Obama being increasingly accused of lawlessness and subverting the Constitution, emboldening RepubliCons march toward impeachment in a wave of inevitability? Is impeachment the price that must be paid for RepubliCons unchained?