Our project, The Green Garage, took two years to plan and another two years of construction. One area requiring significant planning was deciding what to do with the existing materials in the building that were no longer needed.

In most construction projects, the first thing that appears on site is the dumpster, which becomes the receptacle of any materials that might not fit into the new design. We worked a little backward -- we actually designed spaces in the building based on what materials we were taking down. As a result, in the two years of construction, we used only 1 ½ dumpsters. The rest of the material was either repurposed in the building or recycled off-site.

When we determined that we needed a new front stairway, we used our old steam and gas piping to build out the structure. We hired a metal fabricating company called Dormouse to build it. Old inefficient exterior window frames were used for interior purposes, and glass from those windows (circa 1920), while not efficient enough for our outside windows, served very well for our interior greenhouse. An old wooden walkway that extended between two mezzanines, now unnecessary because we had removed the drop ceiling it rested on, became the second-floor railings. 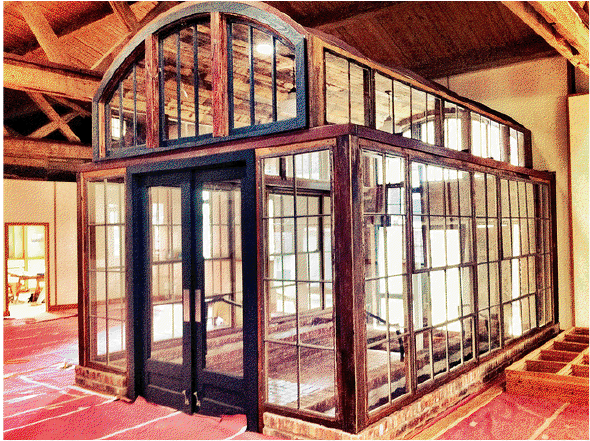 We had to remove a few wood purlins from our ceiling, and we manufactured them into chart rails and seam covers for the walls of our rooms. One problem we encountered was what to do with the old drywall in the building. It had been painted, glued onto the sub-wall and nailed down, so when it came time to remove it, it came off in shards -- completely unusable, or so we thought. We finally came up with the idea of using the drywall pieces as supplements to our insulation in the walls and even the floors.

One of our biggest landfill-saving moves came when we were deciding what to do about our barrel roof. When we bought the building we hired a structural engineer to determine the viability of the 1920 roof. It came as no surprise to us that the roof was considered unsound. In a normal construction project, this roof is removed and taken to a landfill. We decided, instead, that we would put 19" of insulation above the old roof and build another roof on top of it, finishing it off with a white Duralast membrane. This decision kept a huge amount of material from the landfill.

By the time we were nearing the halfway mark of construction, we had accumulated a nice-sized pile of small pieces of wood for which we could find no other purpose, and we certainly didn't want to put it into the dumpster, so we came up with a creative solution. We wanted to build out a brick wall that our new staircase could wind around, and decided to frame the wall in brick on either end, but fill in the middle with our used wood pieces. We hired a design student from the College for Creative Studies to come and build the two-story wall. It is now a focal point of the building, and most visitors want their pictures taken in front of this beautiful showpiece. The real beauty of this wall lies in the fact that every piece of wood is unique and represents the various eras of life within the building.

We had set a goal of 90 percent of the materials within the building to be reused, and met that goal. One third of the material, in fact, that finally ended up in the dumpster came from broken pieces of our once-used polyisoinsulation. All of the insulation we added to the building came from the U.S. waste stream (found on the Internet), and we had been told that we would encounter about 10 percent waste due to the fact that it had been used before. 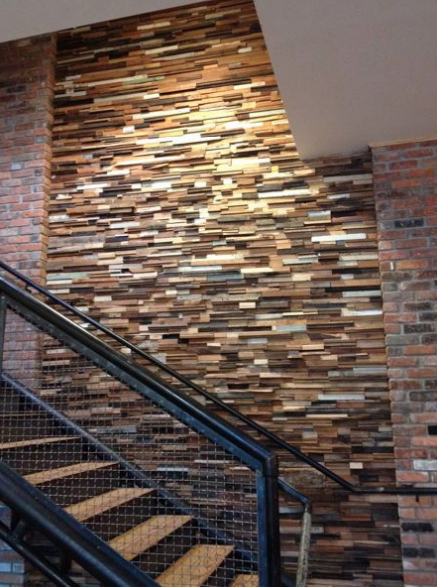 Wood wall made from construction scrap pieces of wood. Staircase was made from our old steam and gas pipes.

In addition to the creative benefits of this type of repurposing, consider the cost savings. Other than labor, many of these materials were free. And looking two stories up at our beautiful wood wall, I can only imagine whose eyes gazed at this same wood in the '20s, '30s and '40s. You can't buy that type of character.