I awoke with a start at yesterday morning and in the silence of the early day I waited. I waited to hear the little snuffling of her nose. The shuffle of soft paws plodding to the bed. I waited for her to leap up and greet me with a silent meow, and then approach, purring, to curl next to my head. Just as she'd done as recently as Sunday. But she never came. And as I went to find her, I remembered the note I'd written to myself Monday night: "If worse or no better in the morning, call vet. If better, wait and see."

She was asleep under my antique secretary, a place she often went when she felt unwell. I gently pulled her out and carried her into the kitchen for breakfast. The night before she'd gotten emergency IV fluids to replace what had been sapped and I'd spent the day running around and getting live probiotics and pumpkin to try and stop the relentless diarrhea that no medication could touch. Fluid replacement often results in dramatic recoveries, but hers was slight. A silent meow and a few bites of food were all she could manage now. And as I syringe-fed her as I had for much of the past week, I held her frail 5.5 pound body to my chest and tried to come to terms with the understanding that this would be our last morning together.

I didn't cry then, but as I sat on the train to go to work for a half day, I couldn't hold back when I considered the fact that the eye ointment I'd put in that morning to treat a case of mild conjunctivitis wouldn't matter all that much by the end of the day. I texted the home vet and asked him to come at 5:30. And then I waited at work and on the train back home. I waited until I could see her bright yellow eyes for a few hours more.

Some people have cats. They put out kibble, scratch their heads here and there and that's enough for them. Then one day the cat dies or runs away or gets sick and they leave it at that. Or they let them go as soon as caring requires more effort than dumping food in a bowl.

I'll never know if this is how PooPoo Kitty came to be mine, but I'm sure she was believed to be long dead by the family that knew her before. She'd wandered in my yard one warm autumn day in 2002. She was emaciated and covered in sores, but she had a little pink collar with rhinestones and no tag. When I found her, I opened the door to go get her some food and she bolted into the house as though she'd lived there her whole life. Over the next few weeks, my ex-husband and I put out "found" posters and ads in the local paper. When we took her to the vet to be tested for diseases we had her scanned for a microchip and nothing turned up. And so we had a new cat who I affectionately dubbed "PooPoo Kitty" for the notorious flatulence of her early days with us.

With love and care, she blossomed into a woolly, pewter beast. With only head scratches as a reward, she learned to give high-fives and beg for treats. She was a comedienne, hiding behind the arm of the couch and leaping up to snatch food from your plate the second your you looked away. Unfortunately for PooPoo, I was a vegetarian for a good 12 years of her life, so she pilfered mostly broccoli and peas with only a few slices of pizza constituting the mother load. After moving to Brooklyn in 2012, she once used both her forelegs like arms to gather half a party-size bowl of Doritos while simultaneously attempting to jam a dozen of them into her mouth at once. It's the single most hilarious thing I've ever seen a cat do.

But she wasn't just clever and funny, she was brave and compassionate. When my oldest male cat was a bully to the others, she'd leap to their defense even though she feared confrontation for herself. Whenever I had a seizure, which were sometimes as frequent as once a week in my late teens and early 20s, she'd curl into me, purring. She kept me tethered to the world even when I felt I was ready to let go. When my quality of life had declined so much and I'd lost my dignity and centeredness with my own body, she was there, tucked against me. When my beloved grandmother (who we both visited every day) died, she was there, too, letting me weep into her downy belly. My marriage. My divorce. Through a dozen deaths both human and feline. From rural Georgia to NYC. She was there.

Through heartache and horror, joy and revelry, she was a companion. A comfort. A wonder in all her brilliance and empathy. She was a witness to my life, a thread of certain love and continuity.

When jaundice set in and chronic lymphocytic leukemia was diagnosed in November 2014, I was told she probably wouldn't make it to Christmas. But with prednisolone, periodic syringe-feeding, homemade vitamin compounds and love, she rebounded with a stellar quality of life for months longer than projected. Even as her lymphocyte levels climbed, the vet marveled at how much she thrived. No one could understand how she was alive much less how, now at age 20, she was still a high-fiving, food-thieving, purring, loving cuddler. But she was. And even though she began to falter a bit at the start of March, I always found a way to pull her back within a day or two. Endless pouring through veterinary manuals and clinical trials and hours finding treatments bought her a generous number of good days. Until it didn't.

Cancer liked those things, too: Hydration, good nutrition. They fed it as much as they fed her and Cancer always demanded more than its share. Even though she was getting five times the food the others got, she began to lose ground at a rapid pace. On March 10th she was 6.7 pounds, down from the 7.4 she was at the start of the month. On Monday, she was 5.5 pounds and food moved through her like water, undigested.

There was nothing left the cancer hadn't taken. Nothing but an attempt to jump into my lap for a cuddle. Nothing but the tiny treat she ate when I got home in the afternoon. Nothing but the strength to hobble over and ask for a chin scratch before getting sick again and crawling back into hiding. She was days from organ failure and I couldn't bear that. I couldn't let the cancer take the last comfort from her.

So I followed my note. I held her in my lap and she rested her chin on my arm as put my hand between her front legs and splayed my palm over her beating heart. I pressed gently there as she had pressed her little body to mine over so many years through so many hardships. And with my right hand I held off the vein so it would swell enough for the needle to find it. And then I waited again. I waited just a few seconds. I waited as the pink phenobarbital flowed into her veins and her heartbeat faded along with the yellow-gold fire in her eyes.

And all I could do was sit and cry on the living room floor with a weight in my arms that felt infinitely greater than 5.5 pounds and a sense of gratitude for a life that had brought more joy than the loss of which could ever bring despair. 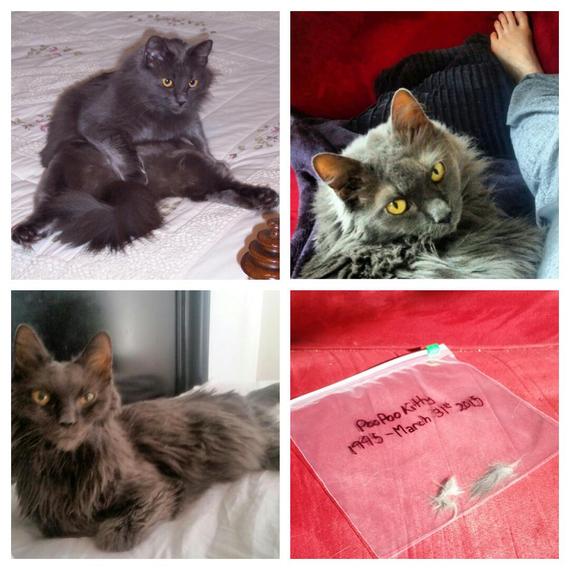