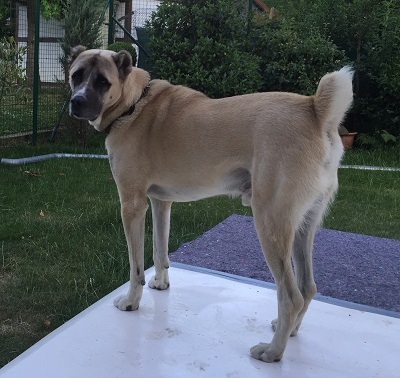 Poochee enjoying his backyard in Luxembourg
Heroic acts are being carried out by ordinary people every single day. All too often our daily news intake is clouded by war, racism, and political unrest, and it's easy for the good news to get lost in the crowd of confusion and chaos. But every now and then we hear a story that touches an emotional part of us, and we feel inspired to share it and remind others that while good can conquer evil, love can conquer all.

To strangers, Paul Wilson may seem like your ordinary guy, but to his friends, family, and especially to his dog, Poochee, he is considered to be a hero. He has always been an avid animal lover and a strong advocate for their welfare, and over the years has had various pets, some of which he acquired in very unconventional ways.

During his service in the British Military, Paul was stationed on an assignment in Sierra Leone. One day while he was working, he came across an African Grey Parrot whose wings had been clipped, and was suffering from severe neglect. As the bird belonged to some of the workers in the camp, Paul needed their permission before adopting it as his own. He figured that by accusing the owners of mistreating the animal, and asking them outright if he could have the bird, the answer was sure to be negative. But if he could somehow persuade them to transfer ownership in a non-threatening manner, his chances of success were a lot higher. So cleverly enough, one evening he approached the workers with several cases of beer, and invited them to share a drink. It wasn't long before the laughter and jokes were pouring out smoothly, and the atmosphere was one of relaxation and fun. All the while Paul was waiting and watching, and when the moment was right, casually asked if he could adopt the bird, in which case they agreed without a second thought. With that simple approval Paul's mission was accomplished, the Parrot would now be saved, and importantly, the relationship between he and the workers would remain amicable. When his assignment was complete, Paul flew the parrot back to the United Kingdom, where it lived out its life in luxury eating well and enjoying the fresh air while being perched on Paul's shoulders while he walked along the beach.

In later years, after Paul had finished his Military service and was working as a civilian, he was called on assignment to Kabul, Afghanistan in 2010. During this time the airbase was still under construction, and it was not uncommon to see packs of feral dogs roaming about. The probability that these animals had rabies was high, which was one of the reasons Paul had received the series of rabies shots prior to his deployment.

One afternoon, amongst a pack of stray dogs was a younger dog of about 4 to 5 months old. The dog was walking with a limp, the fur mangled, his rib-cage visible, and he still had one end of a broken noose tied around his neck while the rest of the rope dragged along the ground. When approached by Paul and some of the people in the camp, his demeanor was timid and nervous, but he didn't come off as aggressive or skittish like the other feral dogs he accompanied. The perception was that this stray could have been domesticated and was simply following the others in a desperate attempt to find food and water.

In Paul's mind, all he could think about was getting this dog the help it needed. He didn't stop to weigh the options, to think about the long term implications of feeding a stray, or the medical risks of being potentially exposed to rabies. He started off slowly by offering the dog the basics of nutritional food, clean water, and a place to lay his head. In the immediate weeks following the initial arrival, the dog's disposition became more relaxed and his health began to rapidly improve. He started to put on more and more weight and was noticeably growing taller and gaining statue with each week that passed by. The noose around his neck certainly hadn't come with a name-tag, and no one had officially picked out a name; but whenever someone asked where the pooch was, the dog showed up. It was because of this apparent association that Paul decided to name the dog "Poochee".

On any given day there were around 900 local Afghans working on the camp, and it wasn't long before Poochee's physical presence gained more and more attention. Many people were guessing about his origin and breed, but it wasn't until the owner unexpectedly showed up on the base one day, and confirmed that he was a purebred Turkish Kangal.

The man explained to Paul that he had come to reclaim his dog as Poochee was of great financial value. He was a breeder of fighting dogs and Poochee had come from a line of champion blood. Poochee was meant to fight in the arena, and the owner had high hopes of winning due to his stature and family history. Paul said that dog fighting in Afghanistan is a lucrative sport. He described how the event took place every Friday, and that it was similar to a boxing match where there is a referee that determines the winner. And even though the dogs did not fight to the death, they were frequently badly injured. It became clear to Paul that his initial assessment of Poochee had been correct, that he had been domesticated but somehow escaped. But it was also clear, that if Poochee was returned to the rightful owner, his life might soon come to an end. It was then that Paul decided to request ownership of Poochee, and astonishingly the owner agreed without much opposition.

Not too long after the man left the camp, there were two separate attempts by local workers to kidnap Poochee. Continue reading on Zoe's Couch