"It came to me that every time I lose a dog they take a piece of my heart with them, and every new dog who comes into my life gifts me with a piece of their heart. If I live long enough all the components of my heart will be dog, and I will become as generous and loving as they are." - Anonymous 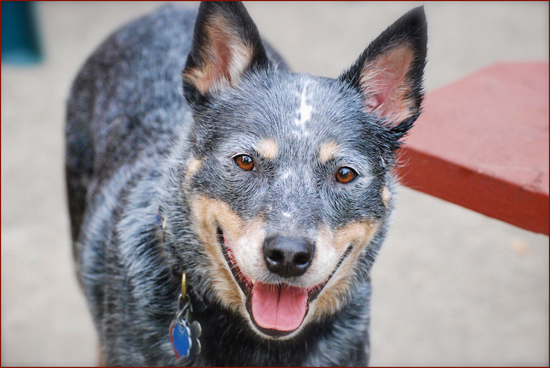 Last week it was time to put our Australian Blue Heeler to sleep. It was a difficult decision to make because Quigley was a part of our family. It was hard to imagine life without him. He was approaching 15 and in the past year his health had been steadily declining. It became apparent in his last few days that his body was shutting down. I didn't want him to experience an ounce of suffering, so I prayed for guidance to know when it was his time to say goodbye. When that knowing came, I talked it over with the vet and made an appointment to bring him in the next day.

As hard as it was to let Quigley go, my husband, Bob, and I knew it was the right thing to do. Quig came to us through a shelter after he had been dumped on a country road. Knowing that he had been abandoned, I vowed to him that I would take care of him. Putting him down was my final way of doing that. 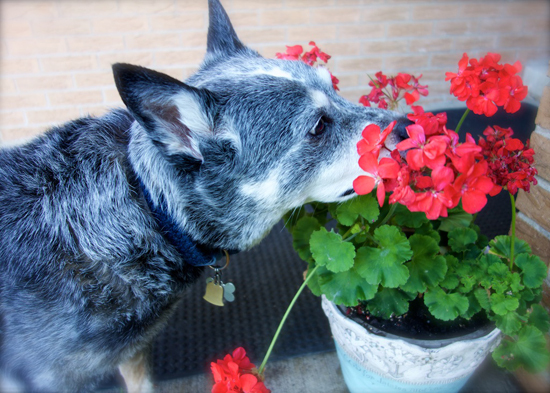 Quigley, on the day we put him down, smelling the flowers one last time.

Quigley was the best dog we ever had. You don't realize how much a pet fills your life until you experience the hollow place they leave when they're gone. Now I yearn for the wonderful, little things about him.

I miss hearing his toenails on the floors.

I miss him laying by my feet.

I miss how he took his leash in his mouth when it was time for a walk.

I miss seeing him run for cover whenever he saw a fly.

I miss how he loved to chase squirrels.

I miss watching him pull my son by the sleeve to the cabinet where the dog treats were kept.

I miss hearing him jump off the couch as I entered the room (he wasn't allowed on the furniture).

I miss seeing his little mug watching me through the window after I walked out the door.

I missing watching him leap into the air to grab a frisbee mid-flight.

I miss him falling on his back to have his belly scratched.

I miss him bringing in the morning paper. 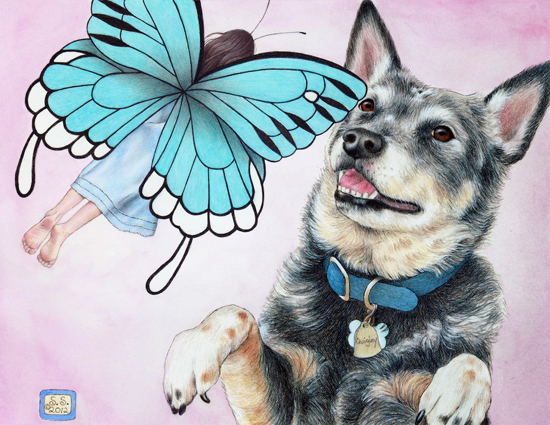 I immortalized Quig in an illustration in my picture book, "Glory in the Morning." 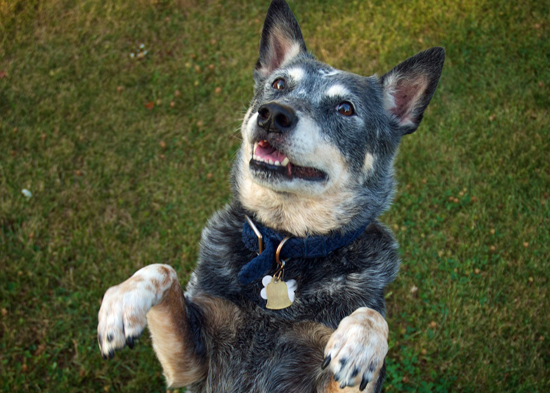 I got this shot Quigley by holding up a treat. He would do anything for a cookie.

After Quigley was euthanized, Bob and I were heartbroken. We thought that maybe in a year we'd be ready to get another pet. Our hearts should be mended by then. But without our cattle dog, our house is too quiet.

That evening our son calls to check on me and suggests we get another dog. "Why wait?" he says. "There are so many dogs that need to be loved." His words convinced me to look up the Australian Cattle Dog Rescue of Illinois. Even though we just put Quigley down a few hours ago, I filled out an on-line application. I thought finding the perfect dog would be a long process, so I'd better get started.

Not too long after hitting send, I received an email from the president of the rescue. She informed me they would be having a dog meet and greet at a Pet Smart not too far from us the next day. She also told me of a red heeler named Maxwell that they had just gotten in.

I decided to go to the meet and greet but not tell Bob. He was so adamant about not getting another dog for awhile. Besides when I saw a photo of Max I felt no connection to him. Shortly after I arrived at the Pet Smart, a lady walked in with the the cutest, little Australian Blue Heeler on a leash. Not Maxwell, another pup. When I went over to pet him, I learned she was his foster caregiver and had brought him for the rescue. When I heard that, I was sure he was our dog. I already loved him. His name is Gary and he is a stray from Ohio. He's 8 months old, the same age Quig was when he came to us. I knew Gary was a gift. I proceeded to fill out the papers to adopt him. I'll be able to bring him home in a few weeks after he is neutered and microchipped.

On my ride back home I kept thinking, what have I done? I really should have talked it over with Bob before I adopted another dog. I felt such a sense of urgency to do it though. I knew Gary needed us. He was ours.

That evening I was apprehensive about what Bob's response would be when I told him about our new pet. And what did the man, who was so certain we should wait to get another dog, say? "Why didn't you bring Gary home with you?" 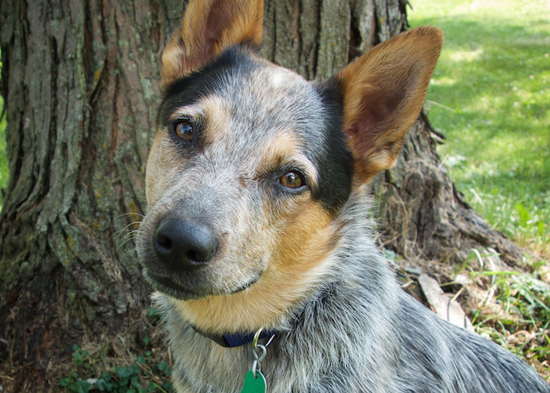 *Click here to sign up for email updates from my studio
Text and images © Sue Shanahan. All rights reserved. www.sueshanahan.com