Ellen the dog has a whole new 'do.

The rescue dog underwent a striking transformation after she was retrieved from an animal shelter by Chicago-based Trio Animal Foundation.

When founder Sue Naiden and the team at the all-volunteer rescue organization -- which often foots the medical bills for abandoned pets -- found the mistreated pup, they could barely see the dog under hunks of matted fur. At first, Naiden couldn't even determine whether the pooch was male or female.

But after countless hours of grooming and cleaning, an adorable young pup -- who the foundation decided to name after Ellen Degeneres -- emerged.

"We wanted a name that was pretty much synonymous with happiness," Naiden wrote in an email to The Huffington Post. "[W]ho couldn't help but think of Ellen DeGeneres and the smile that she always has on her face?"

Naiden first got a line on a mistreated dog and picked up the pooch from an open-access shelter in the Chicago area Sunday evening. When Naiden arrived, she couldn't discern which end was which. 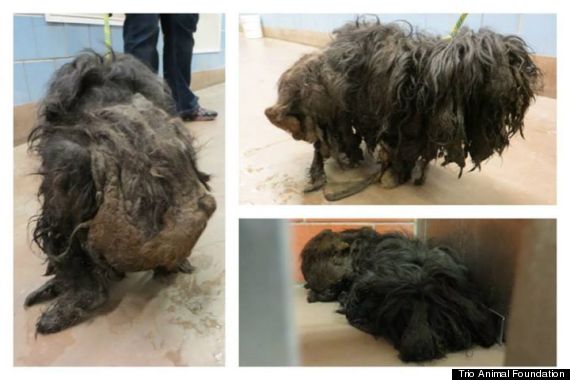 "When we first saw this dog in it’s cage, we didn’t know which end was front or back. We had to get a treat to see which end lifted up to sniff," Naiden wrote in a post on Facebook, detailing the rescued dog's transformation. "As it turned out, the dog had two very petite legs hidden underneath all the knotted fur and the outer appendages were just matted fur and debris." 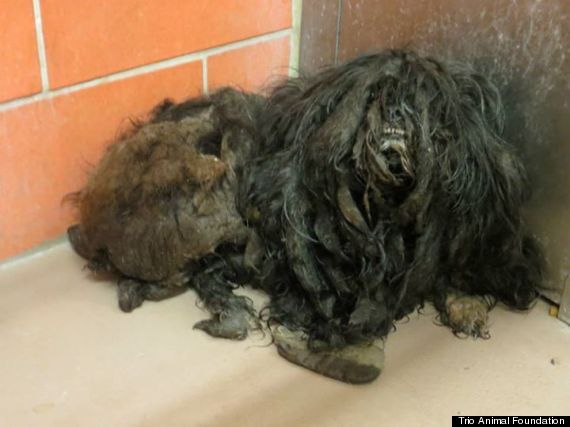 A local groomer in the area volunteered her services and started to work on the staggering amounts of knotted fur, shaving it off to try and extricate the dog from the disarray. Slowly, the dog's head and limbs began to become visible under the estimated 2 pounds of hardened fur.

Even though we had to pull out fur that had grown 2 inches down Ellen’s ear canal and shave matted fur away from her irritated paper-thin skin, never once did Ellen growl or show her teeth. When it came time to shave the matted fur that had tightly wrapped its way around Ellen’s raw legs like a snug boot, Ellen actually looked up at me and started to give me kisses… I could have died. 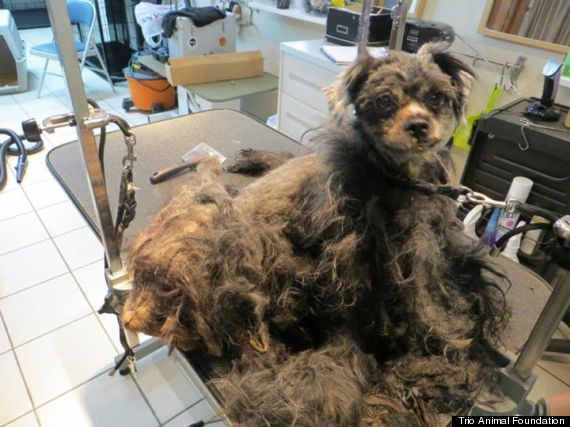 After hours of intense grooming, Ellen was bathed and given a final touch-up before she was transported to a nearby veterinarian for a checkup. Seated next to the pounds of matted fur she lost, Ellen looked like an entirely new dog. 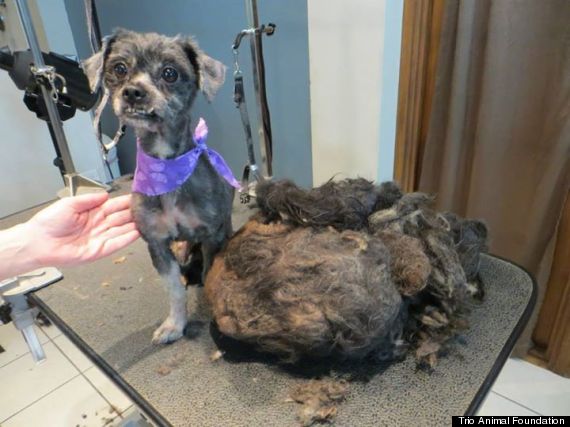 Now, the Trio Animal Foundation is helping to arrange Ellen's adoption. With the spread of rescued dog's story of transformation on Facebook, Naiden said that Ellen already has numerous adoption offers -- including two from Greece and Australia.

"She truly is a little miracle," Naiden told HuffPost.