If there’s one thing society seems to be in agreement on, it’s that marriage = good and staying single  = very bad. After all, married people are clearly happier, or so we’ve been told ad nauseam. Let us bestow upon them many tax breaks!

Except, it turns out, single people actually have richer social lives and undergo greater psychological growth than their married counterparts ― at least according to research being presented at the annual American Psychological Association (APA) Convention this week.

“Single people are doing much better than we’ve been led to believe, and in some ways, they are doing better than married people,” said Bella DePaulo, a project scientist at the University of California Santa Barbara and author of Singled Out: How Singles Are Stereotyped, Stigmatized, and Ignored, and Still Live Happily Ever After.

“Research has shown that there are some profound rewards associated with living single, including more personal growth and development,” she continued. “In fact, research contradicts just about every negative stereotype about single people.”

DePaulo conducted a sweeping review of recent journal articles that have examined the effects of marriage and singledom on things like personal growth and happiness. She found nearly 20,000 studies related to marriage that have been published since the year 2000, but only 500 or so about non-married people. And most of those, she says, were not motivated by any desire to better understand single life, but rather to point out ways in which married people are doing better.

But the overall picture she got from her review of published studies was, in fact, very different. One survey she considered found that single people had experienced more personal growth in a five-year timespan than married subjects. They were also more likely to agree with statements like, “I judge myself by what I think is important,” and “I have confidence in my opinions” than married folk. Another study found that being single strengthens social connections.

The point DePaulo is trying to make is not that being single is necessarily better than being married; it’s that single life isn’t a condition that all adults should feel like they must escape. And it is worthy of more research.

Obvious? Perhaps, but there’s no denying the persistent, pernicious stigma against single adults ― particularly women ― even though they now outnumber married adults in the United States.

So the next time someone asks if you’re “still single” in a way that makes it clear they think that is just about the saddest thing a person could be, tell them that science is on your side.

PHOTO GALLERY
17 Perks Of Being Single 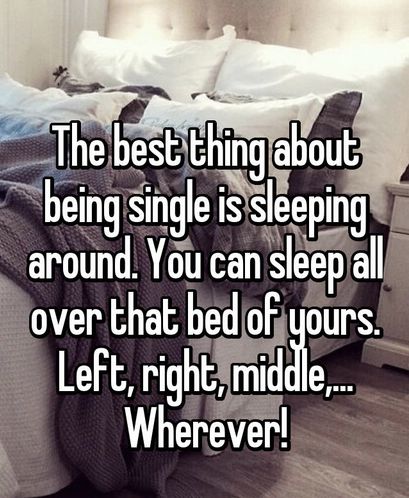