The following entry is co-authored by Dr. Benjamin Knoll and Jordan Shewmaker, a Centre College senior majoring in political science. We are equally responsible for the content.

President Obama's landmark health care legislation, the Affordable Care Act (ACA), continues to dominate political headlines, most recently due to the woes associated with last fall's botched rollout of the online enrollment exchanges. Given the importance of the ACA to President Obama's presidency and historical legacy, it is important to understand why individuals may be more likely to support or oppose this controversial piece of legislation. Our research, recently published online in Political Behavior, suggests that nativism, the perception that a traditional American culture and way of life needs to be protected against foreign influence, is a significant factor that predicts opposition to the ACA along with other more obvious factors like partisanship, age, and income (see here and here for previous research on ACA support).

Why would nativism be related to opposition to health care reform? Michael Tesler has theorized that certain public policy debates can become "racialized" when elected officials and political pundits make efforts to link a policy to racial minority groups in the population through their public arguments and political rhetoric (see here and here). This theory can also extend to our study of health care reform and nativism. If elected officials discuss the ACA in the context of social groups or ideas that have "un-American" overtones, the two issues can become linked in the minds of many Americans.

In this case, there are many examples of nativist framing by opponents of the ACA. For example, at a 2010 rally in Nevada, former VP candidate Sarah Palin Palin linked health care reform to Cuban socialism: "Something's not quite right when Fidel Castro comes out and says he likes Obamacare." Palin was not alone as many conservative pundits and politicians discussed health care reform using trigger phrases such as "socialism" and "un-American" (see here and here, e.g.). It is important to note that the ACA was also framed by opponents as being disproportionately beneficial to undocumented immigrants. The most famous example of this is when Rep. Joe Wilson (R-SC) shouted "You lie!" to President Obama during a 2009 address to a joint session of Congress when the president claimed that the ACA would not apply to undocumented immigrants.

Thus, our key argument is that when opponents of the ACA consistently framed the law as somehow outside the ideological boundaries of what is traditionally considered "American" public policy, those in the public with existing nativist attitudes would become more likely to oppose the ACA. Is there any empirical evidence that this actually occurred? Our research strongly suggests that it did.

It is important to remember, though, that opposition to the ACA is also due to a number of other factors like partisanship, age, and income. Thus, we analyzed the same data using an ordinal logistic regression estimation procedure that is able to tease out the effect of one variable (nativism) on another variable (opposition to the ACA), holding the effect of other variables constant. This analysis confirmed our hypothesis that opposition to health care reform is associated with higher levels of nativism in the mass public. After statistically controlling for the effect of partisanship, political ideology, racial attitudes, income, age, education, etc., nativism was shown to exert a stronger influence than every other variable in the model with the exception of partisanship. Among Republicans, individual nativist attitudes tended to decrease support for the ACA by a factor of about 35% while among Democrats, nativist attitudes decreased support for the ACA by about 12%.

Thus, while nativism influenced support for the ACA among both Democrats and Republicans, the effect was nearly three times stronger for Republicans. (See chart below.) This is not surprising given that the elected officials and political pundits linking nativism to the ACA were almost exclusively Republican partisans. (It is important to note that this findings do not imply that all opponents of the ACA do so because of nativist motivations. However, it does imply that those with nativist attitudes were much more likely to oppose the ACA than those without.) 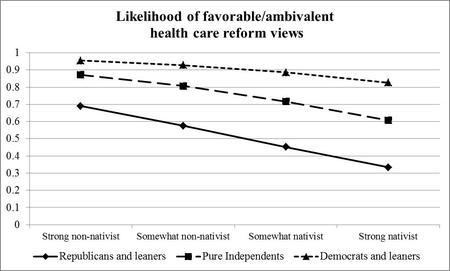 Additionally, it is important to consider the effects of President Obama's perceived "foreignness" on support for his primary legislative achievement. President Obama's religion and birthplace have been questioned by some, perhaps contributing to this perception of foreignness (see here, here, and here). Thus, his personal and strong support for the ACA may have served as a "source cue" mechanism leading those with stronger nativist attitudes to be less likely to support ACA. Interestingly, we find that nativism was not correlated with health care reform attitudes in a 2007 Pew Values Survey while the two were correlated in 2011 after Obama's inauguration and his active campaign in support of the ACA. Thus, we can infer that President Obama's perceived foreignness likely played a role in shaping attitudes toward the ACA, leading those individuals with stronger nativist attitudes to be more likely to oppose health care reform.

This research has important implications for both the academic study of nativist attitudes as well as for "real world" political debates. First, it suggests that nativism can affect public opinion toward issues other than immigration and that elected officials and political pundits can successfully shape public opinion through the rhetoric that they employ. Second, these results imply that the 20th century New Deal model of the expansion of the welfare state is increasingly becoming associated with "foreign" political values and practices in the minds of many Americans, especially Republican partisans. In other words, not only are Republicans seeing the welfare state model as obsolete, but now possibly antithetical to American identity as well.