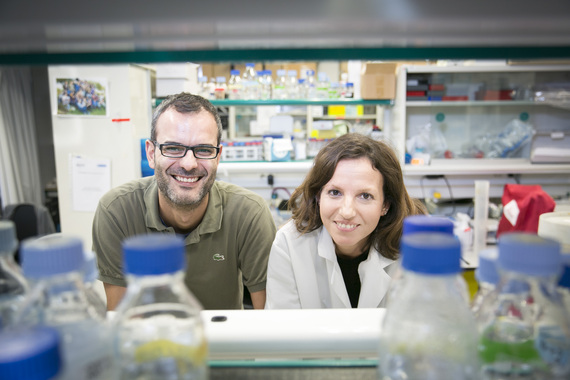 Metastasis, the spreading of cancer cells to other parts of the body, is the main cause of cancer-related death. New research has identified the cells responsible for this process in oral tumors, and also a promising way to stop it. The key lies in the cells' ability to absorb dietary fatty acids--particularly palmitic acid, a major component in palm oil. Metastasis-initiating cells have high levels of the fatty acid receptor CD36 and seem to rely on certain fatty acids to thrive. Blocking the CD36 receptor prevented human oral cancer transplanted into mice from spreading, and a similar effect was found in melanoma and breast cancer cells. Senior author Salvador Aznar Benitah of IRB Barcelona tells us more about these promising findings.

ResearchGate: How did you discover these metastasis-initiating cells?

Salvador Aznar Benitah: This has been an interesting process. Originally, the aim of the project was not at all related to metastasis. We wanted to study whether cancer stem cells that weren't dividing were responsible for tumor relapse after chemotherapy. We did observe these cells, but when we analyzed their molecular features, it was clear that they expressed very high levels of genes previously shown to induce or support metastasis. They also expressed many genes involved in fatty acid metabolism. In a sense, the cells and their molecular characteristics lead us to studying their role in metastasis, rather than the other way around.

RG: How were you able to stop the spread of cancer?

Benitah: We show by different means that blocking the activity of the fatty acid receptor CD36 has a very strong anti-metastatic effect. We hypothesize that metastatic cells rely so much on the availability of certain fatty acids, that they cannot cope without them. However, we still do not know the precise mechanism of why blocking CD36 results in such a strong effect on metastasis. We are working now to figure that out.

RG: What role does the consumption of fat play in the metastasis of cancer? Does the type of fat matter?

Benitah: The preclinical models in which we transplanted human tumor cells into mice indicate that a high fat diet potently boosts the metastatic potential of the tumors. In particular, we identified palmitic acid, a major component in palm oil, as a main player in this effect. Other fatty acids might also do it, while others might even be protective against metastasis. Very interesting questions arise from these results, and we are actively studying these. One important question would be to determine whether lowering the amount of fatty acids in the diet of patients with metastatic tumors could reduce the incidence of metastasis, or their aggressiveness. Careful experiments will need to be done in order to determine these things in patients.

RG: What do your findings mean for our understanding of cancer?

Benitah: I think this is an important and exciting first step. Now that we have been able to identify these cells responsible for metastasis, we can study their behavior in much more detail. Also, it opens the possibility of a new anti-metastatic therapy based on blocking the ability of these cells to uptake fatty acids. We are working hard to be able to try this.

RG: What would a drug based on this approach mean for our treatment of cancer?

Benitah: We are already developing a blocking antibody against CD36 together with MRCT, a UK-based non-profit company, that we hope to test in clinical trials in patients as soon as possible. We hope that this treatment, combined with the treatments already available for patients with these aggressive forms of cancer, may result in better clinical responses, and a better quality of life.

RG: When do you hope to begin clinical trials of this antibody in humans?

Benitah: It is very hard at this stage to know when we could start the clinical trials, but if everything goes alright we hope to start them within the next 5 years. This would be indeed very good news.