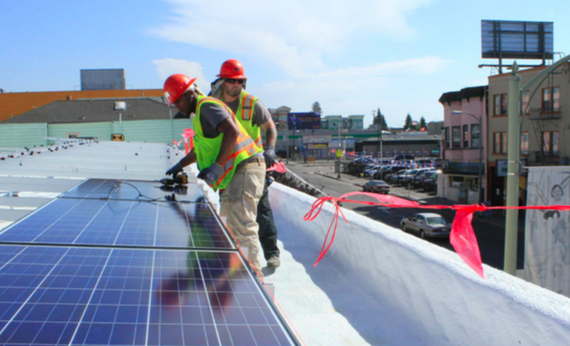 A solar installation in a low-income neighborhood of Oakland, California.

As the price of solar powered electricity keeps falling and rooftop panels pop up in an increasing number of neighborhoods, an interesting thing is shaping up in the market.

Residential solar is no longer for just well-to-do homeowners. Indeed, the growth market in solar is median- and low-income neighborhoods in California and other locales, according to multiple recent reports.

A surge in solar adoption — as well as a shift in where that adoption is taking place — is driven by economics that make solar the money saving option for electricity rate payers and by policies that offer flexible ways for people to benefit from solar.

In California, Massachusetts, New York, Colorado, the District of Columbia, Maryland and some other places, policies that extend the reach of solar to renters and residents without rooftops are widening the market for individual and community installations alike. Financing mechanisms prevalent in some markets but not in others have also made it possible for people to opt for solar without requiring they have money for big upfront costs.

However, more widespread use of policies that democratize solar are needed, say three organizations that this week are publishing "Low Income Solar Policy Guide: A road map to successful policies and programs creating access to solar technology and jobs nationwide."

In it, GRID Alternatives, Vote Solar and the Center for Social Inclusion discuss policies and financing mechanisms that work and why.

"The average cost of a solar electric system has dropped in half since 2010 alone, putting this once-expensive technology within reach of middle-income Americans and driving a surge in solar adoption," they write, noting that the amount of solar installed across the country is ten times what it was five years ago.

"However, there remains a real need for policies that effectively overcome the unique barriers faced by low income Americans in order to ensure that our transition to renewables is transformative for both our planet and our communities," it continues.

The groups are presenting their report amid policy makers in Washington, D.C. today. Yesterday they released the document to legislators from New York state. And they created an online tool LowIncomeSolar.orgfor access to their recommendations.

In interviews with GreenBiz, principals of GRID Alternatives and Vote Solar spoke of the most effective tools.

Net metering solutions allow people with rooftop solar systems to sell the excess generated electricity they don't use back to the grid in exchange for credits or discounts on the electricity they draw from the grid when the sun isn't shining.

Then "virtual net metering" is what's used when a building has many dwelling units and the residents might be renters.

For instance, SolarCity offers a virtual net metering service marketed to affordable housingdevelopers, schools and others. Through it, SolarCity finances and installs solar power systems on affordable housing rooftops or carports or gardens. Then, electricity generated by the solar power is distributed among the housing units and residents receive credits on their utility bills based on the amount of solar electricity allocated to their units.

Relatedly, shared solar or community shared solar "is a door opener" to solar for low income people who might have reason to think of roof top installations. People living on 2nd floor of a 7-story building, for instance, cannot put solar on their roof. But they can participate in a community shared solar when panels are placed atop of the entire building or in a nearby empty lot they have shared rights to.

Companies are very interested in serving the median and low income markets, said Stan Greschner, vice president of GRID Alternatives. For one, it is a huge market. Across the U.S., 22 million homes are considered low income because the household income is 80 percent of the median in the area. In addition, there are 6 million affordable housing units in the U.S.

"The state of play today and in the past 12 months is that low income solar has become a nationally discussed issue — everyone is interested," Greschner said.

"Our interest in developing this guide is to (join) the bonanza of all that interest and stakeholders," he added.

But the market barriers are different. Lack of homeownership is only one issue. Another is that a home may need a new roof first or that the residents have no credit history for borrowing money.

Policies differ widely from state to state and market to market. Solar is a cheaper electricity option in one state while over the border it is costly. Or even within one state over time: witness the change in Nevada that made solar go from a money saving to a money costing service. That's why some solar advocacy groups lately decided to lay out the road map.

Beyond net metering and shared solar listed as compensation mechanisms, the Guide lists the role of state tax credits, rebate programs and the federal Investment Tax Credit as direct incentives.

Policies that widen the market also include financing mechanisms.

Property Assessed Clean Energy loans, backed by the government, have been substantial drivers of solar, letting homeowners choose solar even when they don't have funds for the upfront costs, by letting the installation costs be gradually withdrawn from property taxes.

But since many low income people are not property owners, community based financing tools play a significant role. So-called Community Purchase programs let many individuals all contribute small amounts to a solar project and over time the job is done.

Green Banks have been set up in Connecticut, Hawaii and New York. They are a hybrid private sector and public institution with state guarantees backing private loans to housing developers and the like for renewable adoption.

In Hawaii, for example, the Hawaii Green Infrastructure Authority, Hawaii’s green bank, partnered with the State Energy Office to set up a program of raising capital through issuing highly rated bonds, guaranteed by the green infrastructure fees assessed to all electric customers, to make loans to customers for solar projects.

The leading voice for corporate sustainability