Would you relocate if you had the choice?

A new Gallup report shows that residents in some states are more apt to leave than others, with the most residents in Illinois and Connecticut saying that they would move if they could. 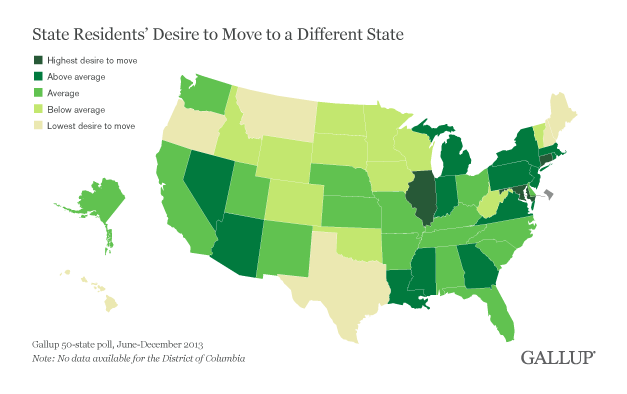 Meanwhile, Montana, Hawaii and Maine had the fewest residents who said they would leave their states if they could. Not surprisingly, residents in Montana were also the most likely to say that their state is the "best or one of the best possible states to live" in another recent Gallup survey.

Overall, about one in three people in the Gallup survey said they would want to move out of their state.

The findings are based on interviews with at least 600 adults in each of the 50 states. The participants were asked, "Regardless of whether you will move, if you had the opportunity, would you like to move to another state, or would you rather remain in your current state?"

As for whether people were actually planning to move, the most people in Nevada -- 20 percent -- said that they were extremely, very or somewhat likely to move within 12 months, followed by 19 percent of people in Illinois and Arizona each, and 17 percent of people in Maryland, Louisiana, Idaho and South Carolina, each.

Meanwhile, the fewest residents in Maine, Iowa and Vermont -- 8 percent -- said that they were extremely, very, or somewhat likely to move within 12 months.

Overall, the biggest reasons people gave for wanting to move were work or business (31 percent), family/social reasons (19 percent), weather/location (11 percent), and seeking improved quality of life or a change (9 percent).

So which residents are happiest with where they're living now, and who would leave if they only had the chance? Check out the findings from Gallup below:

Correction: A previous version of this story mistakenly said in one reference that residents in California were apt to leave their state; that reference has been corrected to say Connecticut.