In 2001 Ann Wright served as the first political officer in the newly reopened U.S. Embassy in Kabul. Two years later she was one of three diplomats to publicly resign from the Foreign Service due to disagreements with the Bush Administration's foreign policy on Iraq and other issues.

Prior to her resignation Wright had a long career as an Army colonel and Deputy Chief of Mission in Sierra Leone and Mongolia. She received the Department's Award for Heroism as Charge d'Affaires during the evacuation of Sierra Leone in 1997. 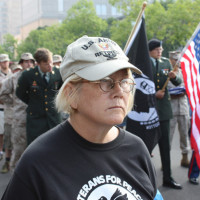 This account was compiled from Wright's 2003 interview with ADST. You can read the entire account, which contains Ms. Wright's full resignation letter, on ADST.org

Q: Could you explain your resignation from the Foreign Service? WRIGHT: Over the years I had been working along in some very controversial programs with the State Department and with the military. While I was in Mongolia I read and observed the rapidly growing U.S. focus on Iraq. I remembered sitting in Kabul (Wright in Afghanistan in photo at left) on the night of the State of the Union address in January 2002.

When President Bush said the phrase "axis of evil - Iraq, Iran, and North Korea," those of us sitting there in Kabul, our backs stiffened, and you could hear a pin drop. Everybody was amazed. That was not what we wanted to hear sitting at ground zero in Kabul at the U.S. embassy. When you're talking about an "axis of evil" -- you know, the blatant, the harshness of right in your face sort of statements just kind of grabbed me.

We had barely gotten into Afghanistan and the focus already was moving from Afghanistan. The strong rhetoric against Iraq and its weapons of mass destruction was starting up. When I went to Mongolia I didn't realize that we had already started moving troops into the Middle East. I think it was just before Christmas when I read an article that said we already had like 130,000 U.S. military troops in the Middle East. I thought, "What in the world are we doing?" 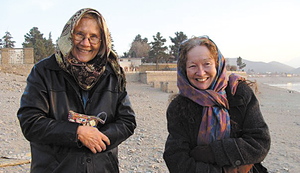 To me there were much more troublesome areas in the world than Iraq. I thought the lack of Bush administration effort to resolve the Israeli-Palestinian conflict was more dangerous than Iraq. I also thought the lack of administration effort in North Korea was dangerous. The administration said it needed to do a policy review. Two years passed and no review had been done. The North Koreans were becoming more and more strident in demanding dialogue with the United States. We all knew the regime was despicable, but at least by dialogue we have a chance to influence it. To me those were the flashpoints and not Iraq.

So when the administration was more and more strident in its talk of going to war to eliminate the weapons of mass destruction, I kept hoping that the administration would get a UN Security Council authorization before undertaking military operations. The probability of terrorist attacks against the U.S. as a result of unilateral action to me was just so high that I just could not fathom why we would be talking in those terms.

It was very hard to present Washington's view to the government of Mongolia and convince them that there was a need for military operations at this time. The need, from all accounts, from virtually everybody except the U.S. and the British, was the need to allow the UN to do more inspections. For the administration not to give more time for the inspections was not appropriate. But when the administration had moved all those troops into the region, and to continue to move more in even though there was no agreement in the Security Council, meant to me that war was on its way.

Q: Were you picking up the feeling that there was a battle in the administration between essentially the State Department and the Pentagon, with the White House sort of siding more with the Pentagon? WRIGHT: Yes. You could pick up little hints of it but, at that time, there wasn't that much publicity about the split between the two. But in my heart I just couldn't believe that all the friends that I had that were working in the European bureau, or in the NEA [Bureau of Near Eastern Affairs] bureau, that they could be, in good conscience, the ones pushing this.

You had to be careful, and still have to be careful, of what you send on the State Department e-mail system. I mean for good reasons. I would send cryptic e-mails to friends to say essentially, "What is going on? What is happening?" you'd get very nondescript e-mails back, and from people that generally are a little more forthcoming. In fact, after I resigned some of the comments to my resignation that came in as State Department e-mails essentially said, "I will not write more on this system."

[Through private email] I got enough of a description that I could tell that there was a lot of angst going on in the Department. The e-mails had nothing specifically outlining exactly what the traumas were in the interagency process, but you could read between the lines.

I had written various drafts of my resignation letter starting probably in February, particularly after Colin Powell's presentation to the United Nations. The type of evidence that the administration had on weapons of mass destruction to me was not convincing at all. I decided that if what Powell described was all the administration could come up with and it wasn't enough to convince me, then I, in good conscience, could not try to convince other governments of the administration's correctness. 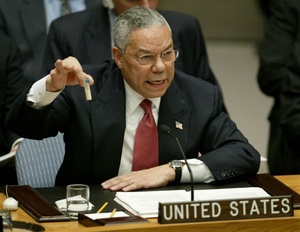 About that time, [Foreign Service Officer] Brady Kiesling resigned. When his resignation letter came out I looked at my drafts of my letters and thought surely we're not going to go to war. Surely we're going to keep after the UN Security Council and let the inspectors have more time to try to find the weapons of mass destruction.

And at the time the administration's rhetoric was truly on weapons of mass destruction; this whole thing about regime change was not what the administration was talking about. I did send in a dissent channel cable that outlined my concerns about what was happening.

At a certain point -- after three months or so -- I left, the inspectors would have found weapons. If Saddam would have again refused inspectors access, then to me that refusal would have sufficient for going back to the international community and getting a decision that action needed to be taken. I probably would not have had as much heartburn on the military operations, although I still would've thought the use of weapons of mass destruction was not imminent. Going ahead with war right then without the UN Security Council authorization, to me was a very dangerous thing for us to do, for our own national security.

Q: Had there been other aspects of our foreign policy with this new administration -not just the Iraq thing - which had been a concern? WRIGHT: Yes, the lack of effort on the Israel-Palestine question, the lack of effort on North Korea, and then the curtailment of civil rights and civil liberties following September 11. The numbers of people that we have kept incarcerated as having possible ties to terrorist groups in the United States, without opportunity for legal counsel to me is very disturbing.

The classification of those being held in Guantanamo to me is an outright blatant violation of international law. They are prisoners of war, they are not detainees, and the fig leaf that we are hiding behind is something that will be used against us in the future as we go to other conflicts and other people hold our soldiers. From the military perspective you want to classify people as prisoners of war because it gives them the best protections, and you're on the high moral ground if any of your folks get captured during military operations. The international norm is to call people prisoners of war.

There was a lot of discussion among many of our officers as we would get in the pitiful little daily press guidance of how to explain what the U.S. policy is. We would look at them and say, "How in the world does this explain what we are doing?" We didn't believe this stuff. How can we possibly use this with the Mongolian government without being embarrassed? Of course, you go ahead with it but we were all just shaking our heads at what was going on. 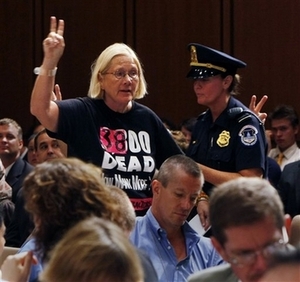 Q: Did anything officially happen about your letter of resignation? WRIGHT: First, I did get a response cable to my dissent cable, although it came after I had resigned. It was nothing more really than just a combination of about three days' worth of press guidance. It contained nothing that convinced me of any greater credibility of the policies.

Following my letter of resignation, Secretary of State Powell himself, or a member of his staff, was kind enough to send a short cable back to me. I thought that was very nice of him, considering how busy he was. Essentially he said he was sorry that I disagreed with policies to the extent that I felt that I had to resign, but he understood the need for it if that's the way I felt. He thanked me for my service in the Foreign Service and in the military. So I thought that was very nice.

I found out later in Washington from some officers that had a hand in drafting the Secretary's cable, the first version was written by some staffers who gave perfunctory thanks but good riddance message. Powell himself, apparently edited it to something that was respectful and nice, considering the criticism my letter contained.

From the hour that my resignation letter hit Washington, I started receiving e-mails from people in the Foreign Service. As the letter was e-mailed to people outside the Foreign Service, within two weeks I had over four hundred e-mails. They were so poignant. I started extracting parts of them and put them together in a big document that I've emailed back to the secretary of state's office. I thought they would be interested in knowing what the comments were that I had received. I did not receive one single negative e-mail, probably because the people that think I was stupid to resign don't want to waste an e-mail on me.

It's very disturbing. I can't believe that our country is now being represented by these policies. I just came back from a quick vacation trip to Europe. In Italy peace signs were hanging from lots of windows, in every village that we went into. The numbers of people that are aghast at what the administration had done and what they believe America now stands for are huge. But I'm now no longer in Federal service. For the first time in my adult life, I have the opportunity to participate in a political campaign. I intend to work for the Democratic candidate because I don't think America should continue to be what we have become. I will certainly work to try to change things.