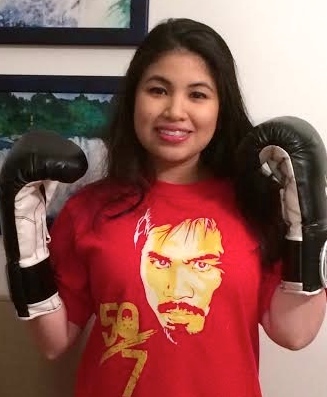 Legendary boxer Manny Pacquiao's documentary, Manny, hits theaters on January 23, 2015. When people find out that I'm a Pacquiao fan, they say, "Really? You don't look like a boxing fan." Later, if they find out I'm Filipino they say, "Oh that makes sense." While Filipinos all over the world are proud of Manny Pacquiao, the only fighter in history to have titles in eight different weight classes despite being 5'6'', it's about more than nationalistic pride for me. When I saw my first "Pacman" fight--his iconic victory over Oscar De La Hoya in 2008--I was bedridden because of Myasthenia Gravis (MG, a rare neuromuscular autoimmune disease). I was diagnosed and hospitalized with MG at the age of 24. The neurologist gave me a 50/50 shot of living. At the same time, my maternal aunt was fighting colon cancer. In addition to MG, I have four other illnesses.

When Pacman fights, there seems to be zero crime in the Philippines. Even for terrorist groups, Pacquiao fights seem to be sacred events. My family--aunts, uncles, cousins, and parents--gets together. When I watch Pacquiao--the philanthropist, Congressman, and boxer--fight, it's a visual metaphor of my painful battle with chronic illness. People have asked me what it's like to live with five diseases and I say I feel like Rocky and my five diseases are Rocky's different opponents. (Bipolar disorder = Apollo Creed, polycystic ovarian syndrome = Ivan Drago, MG = Mason Dixon, asthma = Clubber Lang, and psoriasis = Tommy Gunn.) In the past, I was shocked when people would respond with, "You know Rocky is fictional right?" I wanted to say, "Wow! You mean Sylvester Stallone is an actor?" But when Pacquiao rose to stardom, it was like Rocky came to life. Here was someone who overcame all the odds--raised in abject poverty to become a record-setting boxer despite his size. Here are four Pacquiao fights that coincided with milestones in my family's autoimmune/cancer/bipolar journey:

De La Hoya vs. Pacquiao - December 6, 2008 (Pacquiao by 8th Rd TKO)
Pacman was the underdog facing Golden Boy and Olympic gold medalist, Oscar De La Hoya. Pundits kept saying Pacquiao didn't have a chance because he was too short against the 5'10'' De La Hoya. In spite of (or perhaps because of) his doubters, Pacquiao put on a dominating performance (Larry Merchant called it "death by a thousand left hands") that propelled him to full-blown superstar status. While watching, I thought about mental health discrimination I had faced. When you have bipolar disorder, people doubt you. There's this misconception that bipolar means incompetent, dishonest, or weak. Like Pacquiao, doubters motivate me. (Two years prior to the fight, I graduated cum laude from Northwestern University with two majors while juggling bipolar disorder and polycystic ovarian syndrome.) Lying in bed, I didn't know what a future with Myasthenia held but I was going to fight. At 59 years old, my aunt, Tita Baby, was also determined to fight stage 3 colon cancer. Years before that, she survived triple bypass surgery. Like Pacman, Tita Baby and I were determined underdogs.

Pacquiao vs. Cotto - November 14, 2009 (Pacquiao by 12th Rd TKO)
Pacman knocked superstar Miguel Cotto out in the third round. Cotto experienced a comeback in the fifth, but after that, Pacman dominated the fight with his speed and volume punches. Tita Baby was in the throes of chemo and I was still bedridden. But, that night, we were jumping and shouting constantly. My mom feared my aunt and I would have a setback. We couldn't help ourselves. We got it from my grandmother. She used to watch fights with her fists in the air cheering "lumaban, lumaban!" which means "fight, fight!"

Pacquiao vs. Bradley 1 - June 9, 2012 (Bradely by Split Decision)
Most experts had Pacman winning every round. When the decision was announced, you could hear boos all over MGM Grand arena. Pacman's seven-year winning streak came to an end. The decision was controversial; Senators Harry Reid and John McCain even tried to pass a law to regulate boxing. After the loss, Pacquiao (who had recently become a born-again Christian) said he was still happy because he had his faith and family. Tita Baby went into remission. Then, a few weeks later, she was diagnosed with breast cancer. The day she was diagnosed, twenty of my relatives gathered at our favorite restaurant. We cried, prayed, and laughed together. We were knocked down. But we weren't out. We had each other and our faith. After another year of chemo, Tita Baby would beat the breast cancer.

Pacquiao vs. Rios - November 24, 2013 (Pacman by Unanimous Decision)
A year before the Brandon Rios fight, Marquez beat Pacquiao in a now-infamous sixth-round KO. Many experts declared that Pacman's career was over at 33 years old. Two weeks before the Rios fight, Typhoon Haiyan hit the Philippines. Haiyan killed 6,300 Filipinos and displaced millions. Watching the news, I saw a change in the Filipino psyche that mirrored my own. After natural disasters, I was used to seeing Filipinos tell jokes and talk about trusting in God. Now, I saw wailing and inexplicable grief. I was also fighting depression. Five years after my MG diagnosis, I started to feel hopeless. Life with a chronic illness (or five) is like being in a race with no finish line. The 24/7 pain and fatigue tested my bipolar disorder.

Pacman dominated Rios in every round. Cheers erupted in stadiums all over the Philippines, many of them filled with people who lost their homes. Just as Pacman rose again, so too would the Filipino people. I knew I would rise again. Pacman has won all of his three fights since the 2012 Marquez loss. Sometimes my illnesses knock me out. When I have a day where I'm defeated, I say, "Okay, I lost this round. But I'm gonna get the next one!"