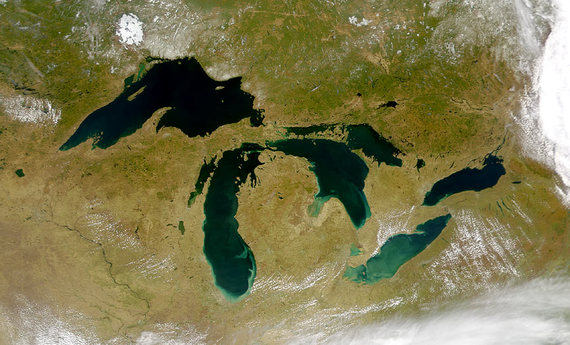 An aerial view of the Great Lakes. Public domain photo via NASA.

As 2014 drew to a close, the Great Lakes received a wonderful holiday present. With bipartisan support, members of the U.S. House of Representatives passed the Great Lakes Restoration Initiative (GLRI) bill, renewing their commitment to fund a plan to protect the health of the Great Lakes.

This is the second iteration of the GLRI. The first was launched in 2010 and allocated $1.6 billion over four years to projects that protect and restore the Great Lakes, throughout the region. The GLRI is an incredibly collaborative effort between many different federal, regional and local agencies, and it is guided by a plan created by the US EPA Great Lakes Advisory Board.

I was humbled and honored to be appointed, in 2013, to the Great Lakes Advisory Board tasked with crafting this new action plan to put this second round of GLRI funding to best use.

Over the past year, my 17 colleagues and I rolled up our sleeves and set to work, charting a course of action that would build on the successes of the past four years and introduce new ways to improve the work underway across the Great Lakes basin.

As before, the action plan focuses on ways to clean up some of the most vulnerable areas around the Great Lakes basin, restore habitats to protect native species, prevent and control the spread of invasive species, and continues to improve the water quality of the lakes.

The advisory board expanded the scope of the new plan for the next four years to help GLRI-funded projects address:

While there's still plenty of work to be done, I'm so pleased to see both the new action plan and the ongoing conservation work throughout the basin affirmed by the US House of Representatives. Now it's up to our elected officials in the Senate to see it through to the finish line.

It's time for all of us to make a new year's resolution to help our Great Lakes. At Shedd Aquarium, we've begun another exciting year of research focused on native and invasive species, collaborative efforts with our basin-wide partners throughout the Great Lakes Network, restoring habitats and encouraging citizen science through our Great Lakes Action Days, and more. Personally, I'm making a commitment in 2015 to travel around the Great Lakes basin more and enjoy the diversity of life that makes this unique part of the world second to none.

What's your new year's resolution for the Great Lakes? I'd love to hear from you.