For the past few years, I've been spending a lot of time on college campuses, discussing the ethics of eating animals with college debate teams; I argue that vegetarianism is an ethical imperative for all members of the student body, and my adversaries (two members of the school's debate team) argue that it's not.

Last year, I visited Harvard, Yale, BYU, the Universities of Texas, Georgia, and Florida -- and dozens of other schools, coast to coast. This fall, I'm slated to visit Cornell, Princeton, Boston College, the University of Minnesota, and half a dozen additional schools. 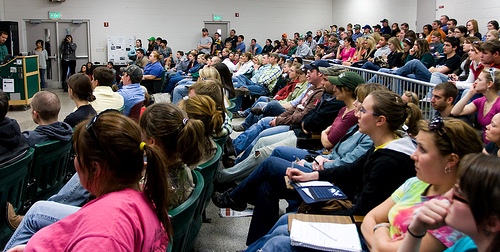 The topic is a hot one on college campuses, and the teams that have accepted have been rewarded by what they have consistently told us to be their largest event audiences ever. You can watch many of the debates online, if you're so inclined, but here is the crux of my argument:

First, eating meat wastes and pollutes our land, water and air--as I discuss more thoroughly here. Second, eating meat drives up the price of cereals, which leads to starvation and food riots -- as I discuss here. Finally, eating meat supports cruelty to animals so severe that it would warrant felony cruelty charges were dogs or cats so horribly abused -- and that's true even of so-called "humane" farms (video).

Cruelty to animals is where I focus in these debates, because it's the issue that is most obvious: We are a nation of animal lovers -- according to a Gallup Poll last May, fully 97 percent of us support laws to protect animals from abuse -- and yet the animals with whom we come into contact most frequently are the animals we pay other people to abuse and kill for us.

The arguments that seem to resonate with students most deeply are:

First, other animals are made of flesh, blood, and bone -- just like humans. They have the same five physiological senses (i.e., they see, hear, smell, taste, and touch) that we do. And they feel pain -- again, just like we do. At most colleges and universities, students are unanimously opposed to eating dogs or cats; the idea revolts them. Yet there is no ethical difference between eating a dog, cat, chicken, pig or fish. If anything, eating your dogs or cats would be morally preferable, since they would have led a good life until you killed them.

In fact, both pigs and chickens do better on cognition tests than dogs or cats. Chickens can navigate mazes, learn from television and have both a capacity for forethought and meta-cognition. Pigs dream, recognize their names, play video games far more effectively than even some primates, and lead social lives of a complexity previously observed exclusively among primates.

Dr. Richard Dawkins, the foremost living evolutionary biologist, calls other species our evolutionary "cousins" and denounces what he calls "speciesist arrogance" -- the idea that we are better than, and can do whatever we want to other species. Darwin taught us that other species are more like us than they're unlike us. Eating meat entails eating "someone," not "something." Eating meat entails eating bits from an animal's corpse. That's not hyperbole; it's reality. That's not sentimental; it's a fact. Don't want to eat corpses? Don't eat meat.

Second, if we're eating meat, we are paying people to abuse animals in myriad ways that would violate anti-cruelty laws if these were dogs or cats rather than chickens and pigs. Animals are deprived of everything that is natural and important to them; they never breathe fresh air, raise their young, develop normal relationships with other animals, explore their surroundings, or do anything else they would do in nature. Artificial breeding practices are used so that animals will grow far more quickly than they would naturally, and their organs and limbs simply can't keep up. For example, chickens' upper bodies grow seven times as quickly as they did just 30 years ago, so these factory-farmed animals who live for fewer than two months (they're still chirping like infants when they're sent to slaughter) suffer from lung collapse, heart failure, and crippling leg deformities.

Michael Specter, a longtime staff writer for the New Yorker , visited a chicken farm and wrote, "I was almost knocked to the ground by the overpowering smell of feces and ammonia. My eyes burned and so did my lungs, and I could neither see nor breathe... There must have been 30,000 chickens sitting silently on the floor in front of me. They didn't move, didn't cluck. They were almost like statues of chickens, living in nearly total darkness, and they would spend every minute of their six-week lives that way."

Similarly hideous conditions exist for all animals raised for food; rather than further detailing the horrid details, I will ask that you if you eat meat, you watch "Meet Your Meat," which is narrated by Alec Baldwin, and "Glass Walls," which is narrated by Sir Paul McCartney -- I generally show the opening two minutes of Meet Your Meat as a part of my 10 minute opening statement in college debates. Both videos offer a gruesome window into what we're supporting if we choose to eat chickens, pigs and other farmed animals. If we eat meat, we should at least ensure that we know what we're paying for.

If you would not personally slice a chicken's beak off, or castrate a pig without pain relief or slice open an animal's throat, why pay someone else to do it for you? Where is the basic integrity in entering into this mercenary relationship? Is the person who hires someone to do something less culpable than the one who carries out the action? Of course not. Eating meat involves paying people to do things for us that most of us would not do ourselves. Where's the basic integrity -- the consistency -- in such a relationship?

Or, put in a more affirmative way: Vegetarianism allows me to live my values -- to "pray ceaselessly," as St. Paul puts it: Every time I sit down to eat, I cast my lot: for mercy, against misery; for the oppressed, against the oppressor; and for compassion, against cruelty. There is a lot of suffering in the world, but how much suffering can be addressed with literally no time or effort on our part? We can just stop supporting it, by making different choices.

So what's the trade-off: Why do people eat meat? And are the reasons we eat meat -- the benefits -- worth the costs?

Well, we get a few moments of pleasure -- most of us like the taste. We have more options at the grocery store and at restaurants. We can eat over at a friend's house without having to bring a dish. We never have to explain our dietary choices...

Although I don't discuss this on university campuses, where everyone knows plenty of healthy vegans and thus knows they don't need meat to survive, I should take a moment to point out that meat is absolutely not good for us. The American Dietetic Association -- the largest body of nutrition professionals on the planet -- conducted a meta-analysis of all the studies that have ever been done on diet and disease, and found that vegetarians have lower rates of heart disease, diabetes, high blood pressure, cancer and obesity than meat-eaters (they believe that the studies indicate causality, not just correlation). Their position paper on vegetarian and vegan diets concludes that vegetarian and vegan diets are appropriate for all people and during all stages of life, including infancy and pregnancy.

So add it all up: Eating meat wastes and pollutes our natural resources -- requiring many times the water, land and energy of eating plants (a moral imperative on its own). Eating meat requires about 1 billion metric tons of grain, corn, and soy -- fed to the animals, who burn most of that energy off, which drives up the price of food for people who are starving (another moral imperative, on its own). And eating meat involves paying other people to do a wide variety of things to animals in ways that most of us would never do ourselves.