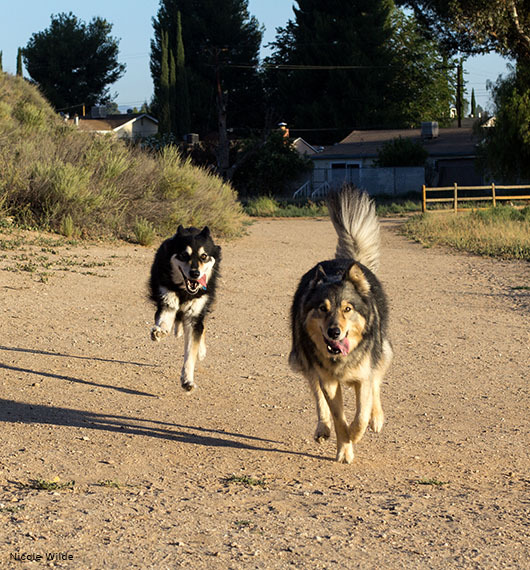 A woman I know once told me, "I'd rather be feared than respected." That was her honest opinion, whether it involved people or animals. Unfortunately, a lot of people seem to share her view. Take the boss who threatens his employee that if he doesn't have a report in by the end of the day he's fired. Or the parent who threatens that if his son doesn't clean his room he'll slap him into next week. Sure, the report is likely to get done, and the room cleaned. But what kind of feelings do you think those acts create?

Of course there needs to be consequences for actions. In dog training, we talk about antecedent, behavior, and consequence. But there are way too many people who still subscribe to that old, timeworn philosophy that to get a dog to listen, you need to "show him who's boss." Look, it's a no-brainer that you should ultimately be the one in charge. But training by intimidation is pointless. Yes, you can threaten, strong-arm, and punish a dog 'till the cows come home, and yes, he'll comply because you're bigger and stronger. But is that the kind of relationship you want? In working with wolves over many years, I often thought about how I'd love to see some of those might-is-right trainers try those techniques with the wolves. In dog training we have a name for what would result--one trial learning; that is, for the human.

I was once in a big box pet supply store when I noticed a man with his Akita. The man was trying to look at something on the shelf, and wanted his dog to lie down. He issued the command in a gruff voice. The dog looked nervous, but did not lie down. The man said, "Down!" again, this time a bit louder. The dog cringed and shrank away as much as possible while on leash but remained standing. Finally, the man all but shouted a very threatening-sounding, "Down!" in the dog's face. The dog hit the floor--facing completely away from the man. Was the Akita blowing him off? Trying to make a statement by pointing his furry derriere in the man's direction? Nope. The dog was completely upset by the tone of voice, and turning away physically is a very common stress signal. The point here is not that a stern voice should never be used with dogs, or that it's fine for dogs to not respond until the third request. It's difficult to judge by one incident, but it certainly appeared by the body language of both species and the man's voice and demeanor that this was not exactly a relationship built on mutual respect.

People often comment that in photos where my dogs are running towards me, they always look happy. Those frozen moments in time come right after I've called my dogs to come, and they comply because we've practiced the recall many, many times, with them being rewarded for their good behavior. If they choose not to come, there's a consequence. Because my dogs are so attached to me, I will hide behind a bush or tree and keep very still. The dog who chose not to come, after finishing sniffing where a bunny had been or whatever the distraction, suddenly realizes I'm not there and all but panics. I let the freak-out go on for a moment or two, and then reappear. This time, the recall is lightning fast. And then we work on getting it right the first time with progressively more difficult distractions.

Yes, you can absolutely get people and animals to do your bidding because they fear you. People do it all the time, and there's no doubt that it works. But it also damages the relationship, creating feelings of mistrust and even dislike. Besides, why do that when cooperation, patience, and consistency in training get solid results while building respect. Personally, I would much rather have my dogs comply out of respect than fear any day.