Had there been a draft when my sons were coming of age, almost 10 years ago now, I would have become an anti-war activist. No way would I have let my Cal and Corey go to Iraq or Afghanistan without putting up a fight. But there was not a draft, and my children did not enlist. And so I became one of the silent ones.

As a silent one, I let other sons and daughters go to Iraq and Afghanistan, some of them not to return alive.

They were volunteers, after all, I told myself. They came, disproportionately, from lower-income families. The military would be a way up, an improvement in their circumstances. Unless, of course, they got themselves killed.

As a silent one, but not one who was silenced, I have been asked to "Support Our Troops." To clap for them at football games, thank them for their service, and let them sit in first class on airplanes.

This show of appreciation stands in contrast to the loathing that was sometimes heaped on returning soldiers during the Vietnam era. Those soldiers were viewed by many as part of the problem -- those who would participate in a war that many believed was morally wrong. Surely our present era of appreciation is an improvement over that era of disrespect, right?

And how do we show our support for the ones who get killed? We hold wrenching funerals, presenting their bereft ones with a folded American flag. When there are enough of them killed, and enough survivors to ache for them, we turn to our country's history of commemorating the dead in cemeteries, in town squares, on the walls of sacred places. We build memorials.

One such memorial is in the center of Harvard Yard, and I recently spent some time there. 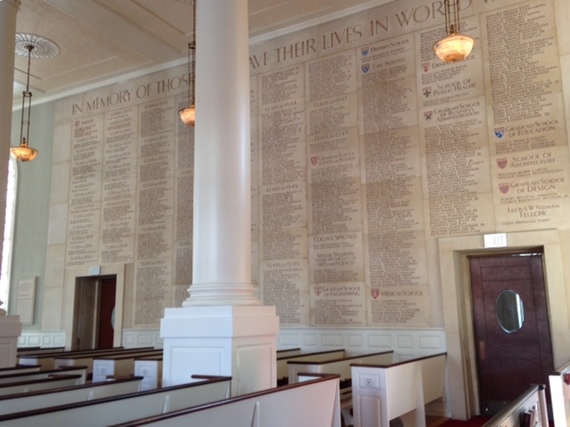 I happened to enter Memorial Church when an organist was practicing. This space of soaring columns and lofty ceiling is filled with light, the pews freshly painted and the crimson cushions recently upholstered. On the wall to my right were engraved the names of those Harvard men who perished in World War II. They are listed by class year, beginning with the class of 1904. For that first year there are only two names, the second of which is Franklin Delano Roosevelt. (He died when the war was still going on, I reminded myself, while Commander in Chief.)

Then the class years continue, with the number of names increasing as the years march into the 1930s and '40s.

As I contemplated the names so neatly carved, the beautiful music rising, I thought of the parents of these men with engraved names who had sat where I was sitting. Of them gazing up at the name of their son, then back at their hands, up at the pulpit, down at their shoes. I imagined their ears filling with music as mine were. How did they reconcile the blackness of their loss with the beauty of the architecture and music?

The class of 1948 is the last year listed, and it has four names: Richard Webster Boyden,Thornton Hunt Lyttle, Joseph Silverstein, Frank Suvla Vickers. These youngest of Harvard's World War II soldiers were scheduled to return for another three years of college. What was commencement day 1948 like for these men's parents? Were they invited? If so, did they come?

Next come the names from the professional schools. There are many for the law school and business school. For the divinity school, there are but two. One is Edgar Raymond Attebery. The other is listed like this:

It turns out the matter had come up before.

Memorial Church was actually built to commemorate World War I. This I learned from a video that Harvard's late Rev. Prof. Peter J. Comes produced. He explains that the building was dedicated on Armistice Day (what we now call Veterans' Day) in 1932. In the nave of the church is a brass plaque engraved in Latin with the message, "Harvard has not forgotten its sons who under opposite colors also gave their lives to their countries." There was, indeed, a controversy about whether to include the German names, but in the end, it was decided that Harvard's first loyalty should be to its students. And so the names were commemorated, although not in the same place or style.

And the band plays on

As a father and a 60-year-old who has witnessed from afar my country's wars, I rail against the waste of it. Yet I have also felt the brass of the bugle and the wool of the uniform.

As a youth, I was a trumpet player and played reveille, charge, and, on Memorial Day, taps. I still remember the pride I felt wearing my first band uniform at Lemon Grove Junior High in San Diego, California, and especially my high school uniform, an imitation of the Scottish Guard's, at Helix High in La Mesa. We played the British Eighth and Colonel Bogey marches, we drilled, we polished our shoes to a spit-shine. All of this, of course, was an imitation of fighting units. When we marched, if non-band members had the poor judgment to mess with us by entering our ranks, we would shove them and kick them to make sure they would pay a price for daring to interfere with our machine-like precision.

When our older son Cal was four years old, Lori and I took him with us to the Copenhagen furniture fair and stopped to have some fun at Tivoli Gardens. When Cal saw the famed Tivoli Guards, who are boys, dressed in toy-soldier red and white uniforms, he was mesmerized. For the first time in his young life, Cal ran away from his parents, running faster than I'd ever seen him, to catch up with those marching, miniature soldiers.

What is it about uniforms, marching bands and marshal music, that we find so acutely appealing?

I have visited the memorial built above the remains of the Arizona in Pearl Harbor and stood in silence to honor those who were silenced that December day. I have visited Gettysburg and choked up when I read the Gettysburg Address and surveyed that broad field filled with those who gave their last full measure of devotion.

With my father, my sons and my wife, I have visited the American Cemetery at Normandy, all of us walking among the endless snow-white headstones and perfectly trimmed grass. My father was shipping over to the Pacific when World War II ended. (He's in the photo below, far right, with his Navy buddies in the Philippines, shortly after V-J Day in 1945.) Had the timing been slightly different, none of us might have been walking Normandy that fine French day.

Of all the war memorials I've visited, the one that disturbs me the most is the Vietnam Memorial in Washington, D.C. As I descend down the ramp of Maya Lin's creation, and feel the names of men and women rising up over my knees, then my waist and then my head, and finally over my head, I feel like I am being buried with them. In the polished marble I see my ghost-like reflection, and wonder why.

I am not a pacifist. There are things worth fighting for, perhaps even things worth letting our sons and daughters fight for. But I have lived to see too many ill-conceived wars and remained silent. I am not proud of this.

In 1972 when I graduated from high school, I received my draft number, but like my father, I got lucky. Nixon resigned in disgrace and the Vietnam War ended with our hasty retreat before I could be shipped over. I wasn't put to the test of serving, or refusing to serve, as those just slightly older than me were. And so I could remain silent, and did, speaking neither with my words nor my deeds. Yet many intrepid men and women had spoken out against the war, and that helped it end sooner.

On this Memorial Day, I pay tribute to those who have served our country in uniform, and also to those who have spoken up against doing so when they believed our leaders were wrong. We need both kinds of brave souls if our war memorials are to have the one thing we all wish they had in common: extreme old age. 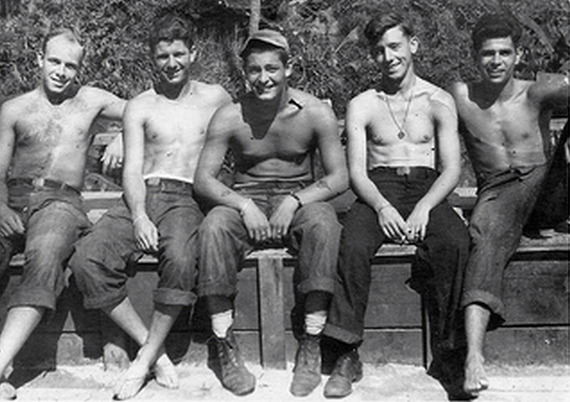