Senator Barack Obama inspires younger generations like no other politician in recent history. Rather than ignoring young people and writing off our entire generation as apathetic, Senator Obama reaches out to us and understands our needs. He offers the youth a refreshing alternative to regressive Bush-McCain policies, which continue to increase the financial burdens on college students. More importantly, our country is more vulnerable to another terrorist attack, and our economy is in crisis because of the current Republican administration. In this election, Senator Obama has inspired millions of people of all ages to get involved in our political system, making the point that change can only happen when "We the People" make it happen. 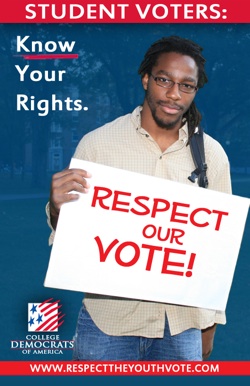 This is why according to a recent Rock the Vote poll, 87 percent of young people intend to vote this election cycle. Indeed, unprecedented voter registration numbers since the primaries have put a number of traditionally "red" states in play. In Virginia, home to 13 electoral votes, the Obama campaign registered nearly 50,000 new voters in August alone. The Obama campaign is rapidly closing in on its goal of registering over 150,000 new voters in Virginia by the October 6 deadline - a remarkable accomplishment in a state that hasn't voted Democratic since Lyndon Johnson carried it in 1964.

Yet with millions of young people preparing to cast their first vote, a shameful Republican misinformation campaign has emerged across the country. Inexperienced voters and young people are extremely vulnerable to miscommunication campaigns, and Republicans in Colorado, Indiana, Michigan, South Carolina, Virginia and all across the country have taken advantage of this over the past few weeks and months. In Colorado, a Republican county clerk falsely informed out-of-state students attending Colorado College that they could not register to vote in Colorado if their parents claimed them as dependants on their taxes. In Virginia and South Carolina, local registrars have intentionally lied to students registering to vote, telling them "you can't vote here." Indeed Republicans are discouraging young people from voting across the country, and these tactics must stop now.

But why would anyone try to strip someone of their right to vote? Yes, young people have voted increasingly Democratic over the past eight years - a USA Today/MTV/Gallup poll released yesterday found that 61 percent of young people support Barack Obama while just 32 percent support John McCain. But we live in a country founded on the premise that everyone has an equal voice on Election Day. We live in a country where you simply can't disenfranchise your political opponent's supporters because you cannot relate to their issues and their future.

To protect the essential right to vote and ensure that students are heard on Election Day, the College Democrats of America are launching a nationwide youth empowerment campaign. The project, entitled Respect Our Vote, intends to combat these despicable tactics and ensure that every student has all the information that they need to cast their vote on November 4th. Students will be able to educate themselves on their rights and report any incidents of voter intimidation on our new website: www.RespectTheYouthVote.com. More over, CDA will be transporting thousands of student activists from around the country to key battleground states to canvass colleges and inform students on the laws in their areas. The right to vote is a non-partisan issue, and we - as College Democrats - will do everything in our power to protect it. The youth vote will not be suppressed now or in the future.

Throughout our history, millions of people have fought to provide all Americans with the right to speak out, choose our leaders, and enjoy the freedoms that many of our peers are fighting for. We owe it to everyone in our generation to ensure that all of us are able to fulfill our civic responsibility. While Senator Obama continues to build a relationship between the youth and the political process, it is up to us to make sure that all students are able to voice their vote in the most important election of our lifetime.