It's a crisis that can be told in numbers: around 890,000 refugees and migrants arrived to Europe by sea this year, while more than 3,500 have died and it's not over yet.

Fleeing war, human rights abuses and persecution, refugees from Syria, Afghanistan and Iraq continue to risk their lives in a desperate attempt to reach the safety of Europe.

Standing alert at the Médecins Sans Frontières/Doctors without Borders (MSF)-Greenpeace radio room on the Greek island of Lesbos, I watch with my heart in my mouth as these tiny boats emerge as small specks of orange life jackets in a sea of blue. 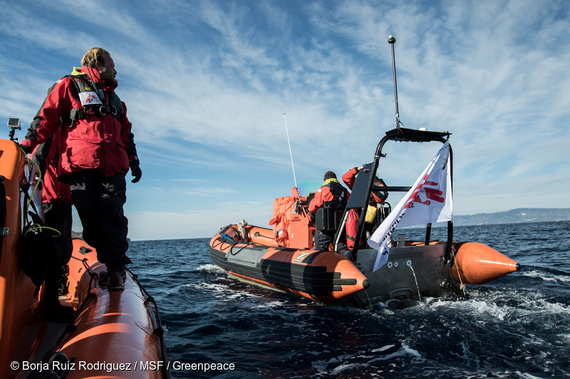 Across the deceptively narrow 10km of water between Turkey and Lesbos these flimsy boats keep coming. Greece is so tantalising close, but overcrowding, sea currents, winds, bad weather and cold waters make the crossing perilous.

This is why MSF and Greenpeace are here - to save lives. Compelled to act in whatever way we could, Greenpeace offered to support MSF's humanitarian operations on Lesbos and that offer was quickly accepted.

As winter approaches, we have stationed three rigid-hulled inflatable boats (RHIBs) on the island to carry out rescue activities at sea to refugee boats in distress. The operation provides support to the Greek Coast Guard and is being coordinated with them.

On Sunday our crews rescued a two-month-old Iraqi baby from a capsized boat that had run aground on rocks within metres of the Greek shore - just one of the many children that have been crammed into boats carrying 30, 40 or 50 people at a time. 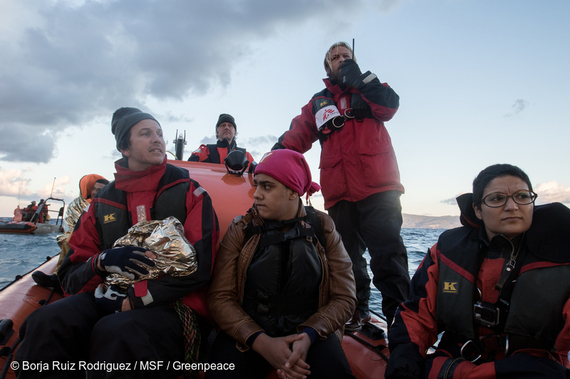 Once they are safely ashore, volunteers and aid groups offer immediate assistance, while MSF medical teams are also on standby to provide emergency care for people in a critical condition and to ensure timely referrals to the hospital by three MSF ambulances.

In an unprecedented crisis, many Lesbos residents have also helped in any way they can - fishermen have saved many from drowning, others have donated food, clothing and shelter, opening up their island with the Greek spirit of philotimo.

It remains a surreal setting though: Lesbos is an island paradise - beaches, olive trees, historic villages and cobblestone pathways, while at the foot of the stronghold castle at Molyvos village there are fishing boats and restaurants.

Among this beauty, countless numbers of wet and bedraggled refugees will continue to arrive. They come with nothing, backpacks or plastic bags with clothes, holding mobile phones and smiling, relieved to be alive, ashore and on European soil.

MSF and Greenpeace have previously co-operated on aid missions, such as in Haiti after the 2010 earthquake and in Aceh, Indonesia following the 2004 tsunami.

Carrying out rescues at sea is a new challenge for MSF and Greenpeace, but waiting for survivors on shore, while more people than ever risk their lives at sea, is unacceptable. This is where Greenpeace can utilize its maritime experience.

It is with these thoughts that I looked into the eyes of a young Syrian girl pressed up to me in our vehicle one cold and rainy day this week.

As we drove her family to a reception centre operated by the UN refugee agency UNHCR, that one brief glimpse of her eyes made sense of everything. It is for her that we are here and for the many others still with hope of a safe passage.